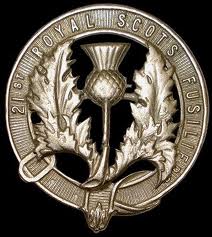 Like many millions the world over I stopped a moment to stand with quiet respect in memory of those who sacrificed in conflicts around the world. As I always do on this day I thought on my Grandfather as his life was the only one within my knowing blighted by the horror of war, although when I knew him I was very young and was prevented from truly understanding his experience by a family protective of me and I now see with an adults understanding, even more protective of him.

Sam Robertson enlisted in The Royal Scots Fusiliers early 1915 and on completing basic training was sent to a place called Gallipoli. He and his 900 comrades were immediately put in the front line and within ten days 480 of them were dead. Months later he and what was left of his battalion were evacuated. Half of the men were sent to Palestine. The rest, including my Grandfather were sent to The Somme. One unfortunate who's experience encompassed two places now synonimous with carnage and the hellish brutality of war.


From a history of the regiment written by John Buchan.

July 26th. The attack on Guillemont.

"The attack was delivered by the 89th and 90th brigades and in the latter was the Manchester regiment and the Royal Scots Fusiliers. The Fusiliers assembled just east of Trones Wood, an indifferent jumping off ground - with D company in trenches north of Guillemont/Trones Wood road, A and B companies were south of the road and C in an improvised trench near to D. The frontage of the battalion was about two hundred and sixty yards.

The attack started at 4.45am and almost from the first things went wrong. The Manchesters were late in starting. Colonel Walsh was to move forward in support with the Fusiliers battalion headquarters and two companies of the 16th Manchesters but the two companies never appeared, and communication with the first wave very soon became impossible. Meanwhile the Scots Fusiliers had made straight for their objective, but the advance on both their flanks halted, and presently they were a lone spearhead without support. There was a heavy enemy barrage on the east front of Trones Wood and the Guillemont Rd was swept by machine guns. It would appear that D company and about one third of A company reached the east side of Guillemont village and that B and C companies were on the western face. The commander of D company Lt. Murray, forced his way back to headquarters about noon to say that without immediate support the battalion would be cut off. He himself had been right through the village. But there were no adequate reserves available and soon nothing could move and live on the ground between Trones Wood and Guillemont. Everywhere, except in the Scots Fusiliers sector, the attack had failed, and the battalion had to pay the price for its lonely glory. Colonel Walsh could do nothing but hold the trenches east of Trones Wood until relieved on 1st of August.

The Royal Scots went into action with 20 officers and 750 men. Of these 3 officers and 40 others, chiefly headquarters staff, remained with Colonel Walsh at the close of the day, and later less than 100 others dribbled back through another brigade. The rest of the battalion were dead, wounded or captured. Total losses were 633 men.

The division commander wired to Colonel Walsh during that day 'I cannot tell you how grieved I am for the loss of your splendid battalion and above all for those still left in Guillemont. They did grandly and all that men could do'

The scanty remains of the battalion moved north on 11 August to Bethune, where for two months while it regained it strength it stayed in a relatively quiet part of the front."


In some three years in front line service my Grandfather went 'over the top'  on several major offensives, survived being shot three times and was returned to the trenches on recovery each time. He came home suffering from what we now call post traumatic stress disorder. In his day it was called the less technical but probably more accurate name of 'shell shock'. When I knew him he was completely bedridden and could barely speak. He shook constantly. Cared for within the family, my job was to shave him which is why I remember him so very clearly and so fondly. He died in 1968 when I was nine having suffered for more than fifty years.

The tragedy of war is that it affects not only individuals but families and communities. The effects last generations.

Email ThisBlogThis!Share to TwitterShare to FacebookShare to Pinterest
Labels: remembrance

Beautiful and just as I recall you telling me about your Grandad. Thanks for this. G

Brutal. Thanks for helping us all remember.

Thank you both. He might not have talked but he was a lovely man.

Sorry, just catching up today after a busy week. Such a moving post this is, Alistair. Your poor grandfather suffering for so many years, dealing with his PTSD/Shell shock after being on the front lines so many times! No one should have had to endure what these lads in WWI did - such a slaughter of innocent, guileless, unknowing boys who only had some stories of glory to feed their eagerness to go to war. A tragedy yes, but I suppose it is also a beautiful story of a loving family who cared so well for their grand-dad.

Aye your right. He was very protected and cared for by the family, especially my Gran who was made into a very strong and determined woman by the need to cope and to provide for her four children. My Grandfather lost most of his pension after a change in the definition of his condition from 'caused by' to aggravated by' The effect of war.......