A Tale Of Two Cities? 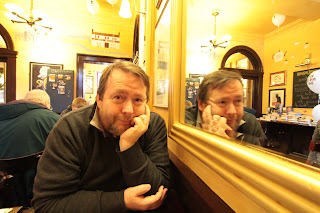 Our hero is bemused - as usual.

I turned the key in the lock and walked out to the car across the half inch of snow that was being slowly added to by the minute, the bags heavy in my hand as I opened the boot and placed them, my camera bag and a couple of other things we'd decided to take on this short break, carefully inside. We always have a holiday around my birthday and this year's no exception, although we'd decided to stay in the UK to save money for later in the year, something I was regretting momentarily as snowflakes managed to get down the neck of my shirt as I got into the drivers seat. It struck me that somewhere warm and sunny right now would be a nice relief from the cold and damp of a Scottish winter. Technically it's not winter any more of course, but no-one's taken time to let the weather know and it's been dourly consistent in its approach to the passing days. This holiday would take us to England, staying a few days with a friend and an overnight somewhere on the way back at the end of the week. 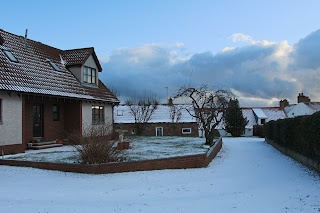 Ok - maybe not quite half an inch. Sue me.


The snow on the road at the end of the drive was red slush, stained the colour of the local soil from the fields around the village, but had all but disappeared as we joined the main road a few moments later and headed south on the twenty minute drive to Berwick Upon Tweed to catch the train due in half an hour. I flicked the wipers on as dirt spray spattered from cars in front and decided that lights wouldn't be a bad idea either on a day so grey and flat and with the world in monochrome beyond the window. 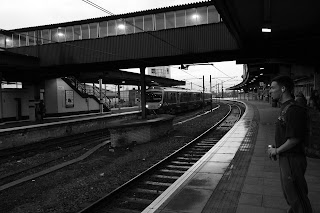 The day was dull and grey and monochrome.
A lot to say in English.
In Scots we'd just say 'dreich'. Everyone would understand.

A few minutes later than the scheduled time we pulled out of the station comfortably sat at a table to ourselves. G was texting ahead to let our pal Indigo Roth know that we were on our way while I  was busy setting up my laptop for the journey- a couple of hours then a switch to take us another couple of hours down towards Cambridge before finally changing to a local service to get to our friends home town. Part of my birthday pampering was this part of journey in first class, with its extra leg room, better seats and a never ending supply of complimentary tea, coffee, drinks and various other goodies. I was pleased, but we'd be coming home standard class as we'd decided to break the journey into two smaller portions with an overnight stay in York, - one of  'our places'- making first class an unreasonable cost.

G is a seasoned rail traveller from her time working in Edinburgh but it's not something I've done a lot of over the years, my preference almost always being to drive. A rail journey then, is special to me and I'm always reminded of my first train trip as a small boy - a visit with my Grandmother to her twin sister who lived at the other end of the world. Or that's how it seemed to me at the time. Being such an unusual and evocative means of transport to me,  trains are therefore special and I always get a frisson of excitement as a journey starts. In some ways it's part of the reason I'd rather be an infrequent passenger. I like to keep it special. I'd hate to lose the feeling.

As we stepped off the train a few hours later the figure of our chum was easily identifiable. It's not easy to miss the afghan-lean six foot five figure of Mr Roth and today was no exception as from the other end of the platform he raised his walking cane and waved a cheery greeting some distance over the heads of our fellow travellers. While we walked towards each other he doffed his gleaming bowler hat and beamed a smile, his dark locks shining in the late afternoon sun. He'd dressed for the occasion in an impressive Victorian style frock coat,  with dark, muted stripe trousers over gleaming shoes and spats. From beneath his coat the edge of a crimson waistcoat caught the eye and led the glance past an immaculately starched ivory shirt and a Jacobs-coat-of-many-colours cravat at his throat to our monocled friends face. By the time he'd reached us he'd removed one of his pale calfskin gloves and proffered a hand the size of a small country to G, who was delighted when he bowed and kissed the back of her hand before scooping her into a hug and lifting her several feet off the ground.  When he gently returned her to the platform he kept an arm protectively around her as he replaced the hat on his head, adjusted the angle to 'jaunty' and thrust a manly paw in my direction. I reached out to shake it to find myself pulled to his side while he exclaimed his delight at seeing me again. I felt my shoulders squeeze several inches towards each other as he manoeuvred all three of us around to face the opposite direction. He gently encouraged us in the required direction and when I turned to collect the bags found that he'd scooped them all up, one in each hand and one under each arm. Nodding cheerily towards the exit he began explaining all the plans he'd made to introduce us to the local area over the next few days as we walked from the station. 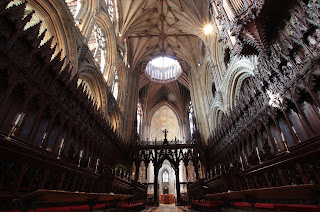 At the large sleek automobile parked in front of the station building he flipped open the expansive boot and put the bags effortlessly away before the gleaming lid seemed to close automatically. I found myself grinning at the sight. Typical! Nothing's ever ordinary around this man. A quiet cough brought me from my reverie to find him standing by the open rear door as G took her seat. He closed it behind her and opened the front door, indicating with a look that I should sit up front beside him. The journey from the station took only a few minutes as he explained the rail company had built the station on the edge of his estate and sure enough we were soon to pass through the entrance gates and onto the drive beyond. It was 'unfortunate' in one way explained our host as he drove at breakneck speed through the grounds, as the views were 'somewhat curtailed' by the station but it was frightfully handy for visitors. He went on to explain that the view in the opposite direction took in almost the whole estate and he'd set aside rooms for us on the third floor so we could take full advantage of the scenery. Nothing but thoughtful is Mr Roth. 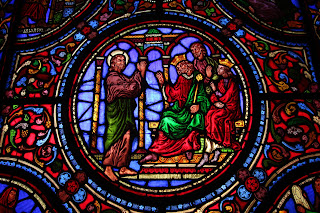 Windows like these are really hard to see out of.
Putting them them so far off the floor doesn't help either.

He paused at the wide door long enough to punch a few digits into a keypad and once past the secure entrance and into the house itself we were shown to our room and given time to get freshened up. Indigo said we should take our time and when ready he had some refreshments prepared and we could relax and catch up with all the news since we'd last met when he'd come to ours to stay a couple of months before.  Later, after a wash and brush up, our host, now sat langourously in a huge wing-back chair with a velvet smoking jacket to replace his outdoor coat,  a tassled fez perched on his dark hair and with red velvet slippers on his huge feet, plied us with delicious coffee and petits-four. The coffee, as expected coming from something of a connoisseur, was exceptional. I enjoyed the after dinner snifter that followed a home cooked meal later too. The perfect and civilised end  to a days travelling.

Indigo had just completed a challenging month of writing while working on his first book, but the output had been largely frustrating as it had shown him that what he'd hoped to get out as one novel was now looking like three or four. Glad of the opportunity to take a breather, he'd organised the next few days so we could spend time together and indulge in our shared passion for photography and cream teas. Sorry - I mean architecture. He talked us through the architectural delights of some of the coffee houses, tea shops and cathedrals he hoped to take us to before we spent the rest of the evening comparing our camera gear and discussing the pros and cons of digital photography and visualising travel through time and relative dimensions in space until it was time for bed. 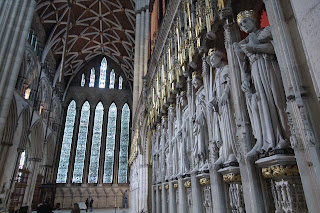 The next few days would pass quickly as we hurtled enthusiastically from place to place with Indigo behind the wheel of his charabanc. Writing this from home after the event and given the speed of his driving, the memories are blurred. Hopefully, the photos aren't. 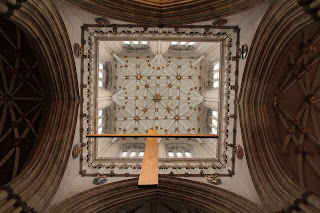 York Minster
I got some odd looks lying down to take this.
{but I still enjoyed the snooze too}


Thank you Indigo. Hopefully we can do The Edinburgh Festival this year.

Sounds like Indigo showed you a marvelous time! (After reading this, I seem to have a hankering for a cream tea. Nothing compares!)

Spats, cravats and grand estates, eh? I'd expect nothing less from your host.
Glad you enjoyed your birthday stay.

I enjoyed the retrospect of your journey. You always recount an event with an eye to details.

Been a wee while since I posted anything 'proper'.

Note to self: must try harder!

Hari OM
Oh you're my kinda folks Alistair (and Indigo!) - I went to school in Suffolk and one memorable day trip was to Ely Cathedral. As for York. Ahhh memory lane.
Am also a keen train tripper. Even when had to do it twice a day commuting-ways, I never lost the appeal for being able to travel and keep my hands off the steering wheel... but then, it did cross Sydney Harbour... Happy Belated B'day and thank you for sharing some of it. &>YAM

Although how typical of a Scot to be traveling over the Forth Bridge MkII.

Glad you enjoyed this one Yamini. Don't believe everything written about IR. Sometimes he's a very nice man.... lol.

So hope to see York some day.

After 9 weeks with no broadband, I can finally start catching up with folks' blogs again. What a lovely holiday - and your wonderful friend sounded rather like a skinny Hagrid out of doors, and Aleksandr Orlov meercat inside!!!