The Sunday Posts 2015/ An Australian Sunrise 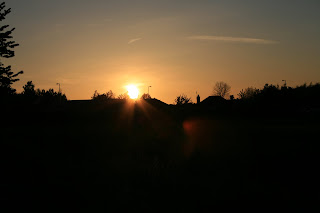 The Morning Star paled slowly, the Cross hung low to the sea,
And down the shadowy reaches the tide came swirling free,
The lustrous purple blackness of the soft Australian night,
Waned in the grey awakening that heralded the light;
Still in the dying darkness, still in the forest dim,
The pearly dew of the dawning clung to each giant limb,
Till the sun came up from ocean, red with the cold sea mist,
And smote on the limestone ridges, and the shining tree-tops kissed;
Then the fiery Scorpion vanished, the magpie’s note was heard,
And the wind in the sheoak wavered and the honeysuckles stirred;
The airy golden vapour rose from the river breast,
The kingfisher came darting out of his crannied nest,
And the bulrushes and reed-beds put off their sallow grey
And burnt with cloudy crimson at the dawning of the day.

Meaning of unusual words:
The Cross - The constellation of the Southern Cross, which appears to become lower in the sky towards morning.
The fiery Scorpion - The constellation of Scorpio which contains the first magnitude star Antares, which shines with a reddish light.
sheoak - a tree which is not as heavy and hard as oak (the Englsh settlers declared it weaker than English oak but similar so "She-oak"). It grows primarily in a small area on the south coast of Southwest Western Australia.
at September 13, 2015

Hari OM
Strewth mate,
you got this ol' shiela dabbin' at 'er eyes!!!
and chanting it out loud in that broad Australian way,
For this is a long time favourite
of the barbie crowd I know
and there's been many a serenaded sunrise
where we've all heard the she-oaks sway....

Thanks. I knew you were going to like this one.
It's got a lovely meter. Cries out to be spoken aloud.