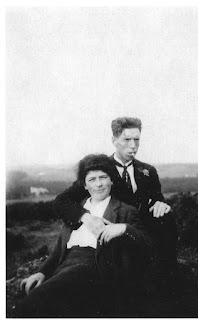 By the time I knew my grandmother she was dead.
Before that she was where I thought she stood,
Spectacles, slippers, venerable head,
A standard-issue twinkle in her eyes –
Familiar stage-props of grandmotherhood.
It took her death to teach me they were lies.


My sixteen-year-old knowingness was shocked
To hear her family narrate her past
In quiet nostalgic chorus. As they talked
Her body stiffened on the muted fast
Though well washed linen coverlet of her bed.


The kitchen where we sat, a room I knew,
Took on a strangeness with each word they said.
How she was born where wealth was pennies, grew
Into a woman before she was a girl,


From dirt and pain constructed happiness,
Shed youth’s dreams in the fierce sweat of a mill,
Married and mothered in her sixteenth year,
Fed children from her own mouth’s emptiness
In an attic rats owned half of, liked her beer.


Careless, they scattered pictures: mother, wife,
Strikes lived through, hard concessions bought and sold
In a level-headed bargaining with life,
Told anecdotes in which her strength rang gold,
Her eyes were clear, her wants as plain as salt.
The past became a mint from which they struck
Small change till that room glittered like a vault.
The corpse in the other room became to me
Awesome as pharaoh now, as if one look
Would show me all that I had failed to see.


The kitchen became museum in my sight,
Sacred as church. These were the very chairs
In which her gnarled dignity grew frail.
Her hard-won pride had kept these brasses bright.
Her tireless errands were etched upon the stairs.


A vase shone in the sun, holy as grail.
I wanted to bring others to this room,
Say it’s nothing else than this that people mean.
A place to which humility can come,
A wrested niche where no one else has been
Won from the wastes of broken worlds and worse.


Here we can stay, stupid and false, of course.
Themselves to the living is all we have to give.
Let this be
To her, for wreath, gift, true apology.
William Mclvanney
Photo from family archive.
at December 06, 2015

Wonderful poem, can just see her.

My grandmother is my soul. I wish I could keep her alive forever.