Putting Scotland On The Map {Part one} 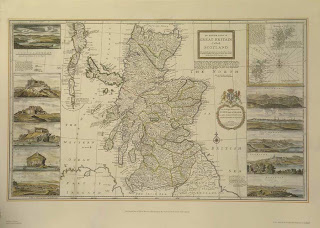 Imagine a time before Scotland; before Britain; before countries. There are no cities. There are no towns. No great castles or villages mark territory or give any hint of habitation; not even the tiniest of hamlets is to be seen.  No bridges span the great estuaries of the River Forth or Clyde and no ships, great or small, make their way up the rivers. There are no roads or railways and the skies are untouched by aeroplanes. No man-made modern light-spill interrupts a view of a night sky filled with a huge vista of stars and planets tracking across the horizon in a slow reassuring pattern that marks the changing seasons,years and centuries.  The only tracks across the land are tiny and infrequent, made by the feet of wild beasts more often than of any man.

Beneath that double cone of Arthur's seat there's no Edinburgh spilling down to the river. To the east, in the distance, North Berwick Law stands untouched and no lighthouse blinks across the water from the Bass Rock, no ancient tribal citadel can be seen on the crest of Traprain.. The land is covered by heavy deciduous woodland reaching back to dark hills and moors that rise up in the distance. Pine forests exist only far off to the north where the mountains can be seen in the distance, glimpsed from the top of the dead volcanic plugs that will come to be called Traprain or North Berwick Law. Far down the coast where the river becomes the sea and land turns towards the south and the spot I will live thousands of generations in the future, beside a place that will one day be called Dunbar, a slim column of smoke is the only recognisable sign of life.

Here - finally - are signs of man.


Near the sea, between the water and the woods, is a house. It's a small, crude thing to our modern eyes yet it's the culmination of generations of experience and millennia of skill with its walls made from small branches of trees woven together and covered with mud built around a framework of a few solid wooden posts. The roof is pitched and roughly thatched with brush over a small hearth where a fire burns and smoke collects beneath the roof until it finally makes its escape by seeping through the roof. In this smoke hang small pieces of fish and meat strung from the relatively low ceiling.  We know all this because 10,000 years in the future archaeologists will find the post-holes and enough information to reconstruct the building at Skateraw and will name it the oldest house in Scotland. Of course the man who built it and the family who live here have no idea of that. They have no concept of such a timescale and the house is probably only designed to last a few months until they move on to the next place, guided or driven by available food supply and weather conditions.

They are the first people; hunter-gatherers whose life is dictated by the seasons and the availability of sufficient food to sustain them as they comb the shoreline for molluscs or shellfish, or net fish and trap eels in the shallows of the sea or the nearby river using a small round boat constructed of hides stretched over a supple frame of light wood. They are expert in finding nuts, fruit, or herbs in the woods and trapping animals for food and skins. Despite the fact that they are clothed in hides and use many wooden and bone tools we call this the Stone Age simply because their stone artifacts are the most common sign of their passing due to the durability of the material they are made from. While they undoubtedly have many more skills and expertise, the natural materials they use don't survive the ages except in extremely rare and precious circumstances. More often is found the worked stone hand axes or evidence of their ability as flint nappers. Flint, with its ability to be worked and flaked into razor edged cutting implements is found only in a few places, yet traces of its use found widespread across the land shows a degree of organisation and cooperation in finding and trading such a precious commodity. So adept are the people at napping this flint that they can create and use tools so tiny and delicate that they will be called microliths and will be used as an academic point of difference in identifying them from their counterparts across continental Europe who produce tools only of a more substantial size. This skill may tell us that flint was a rarer commodity on this island and necessity has driven the inhabitants to use every scrap of such a precious material.

Beyond a few stone tools and precious few examples of other materials being worked we know almost nothing about these people. We don't know what language they spoke or how they viewed the world they lived in, what kind of society they had or just how far each group roamed in the search of the food they needed to live .We have no image of them on the walls of caves showing them in the midst of a hunt. No record remains of the stories told by their firesides. Their songs are long silenced and their names unknown. Of all the people who will come later the first people leave the lightest trace in the landscape. Beyond the tools they leave behind there are only a few glimpses of the people themselves; a set of petrified footsteps where a small family group of adults and children once crossed an ancient beach; the space left among thousands of flint shards that mark the ancient knee and foot places of the man who hunkered down millenia ago to concentrate on his task.

They first appear at the end of the last ice age having migrated from continental Europe across what is now the North Sea but at that time was one continuous landscape until rising sea levels created the islands of today. The climate they experienced was warmer and more temperate than ours and foodstuffs, especially around the coast and lowland woods filled with larch, birch, oak and hazelnut were plentiful for most of the year, but they also had to contend with the threat of wild animals such as bears, wolves and boars in their never-ending search for sustenance.

In time the first people will become the various tribes of Celtic peoples who live across the land and as such will help shape and name the landscape they live upon and which undoubtedly shapes them in return.

That will be thousands of years in the making, but they have begun the process of putting this little place known as Scotland on the map.

You are my favourite anthropologist.

Umm.....wait a minute. You don't KNOW any anthropologists do you????

Aye cheers for that buster!!!

Looking forward to this series Al! I have that very same map that you posted; I was poring over it today BEFORE I saw it on your post. What a coincidence! I love the way Dunnotar Castle is shown, a massive place, compared with what's left, though of course it's still a magnificent ruin in a lovely setting. Cheers.

Ah - so it's not just me that spends ages looking at old maps then Swifty.

Glad to have piqued your interest with this one, but to be honest I've no idea yet how to tell the story I'm thinking of.It feels like it's going to lead me into another series of posts after this about the dialect of the lowlands as opposed to the Gaelic language.

Oh well I suppose I've been too quiet lately!

Hey Alistair! I really enjoyed this. It made me think, damn you. Indigo

Alistair, I've often wondered the same. I saw an article on Skara Brae recently which posed similar questions. I wonder what they were like, and what their lives and diet were made up of.
Probably Irn-Bru coloured water and the first attempt at a deep-fried haggis, followed by cheering the first team to kick a sheep into the Loch.

Hullo Lads - sorry for the delay in responding. I've been away for a few days.

Glad you enjoyed this first {hopefully} of a series of posts on people, landscape and maps. I just hope to do it justice......

And Indigo - I'm just getting my own back on you as far as that's concerned buddy!

And here I am--having trouble imagining the landscape of my ancestors only 150 years or so ago in Upstate New York and New England!
It was amazing to me back in the 1970's to be taken to the farm where my Grampa Mac grew up and find only tumbled stone walls, the rock foundation of a barn, over-grown pastures. The mind does strive to reinvent a habitable place.
I have both Scottish and English roots as well as my father's French Canadian ancestry--during a sleepless night the mind can boggle while pondering the DNA that creates each one of us.
Good post--I especially look forward to your upcoming series on language and dialect.

Thank you for your post. This is excellent information. It is amazing and wonderful to visit your site.