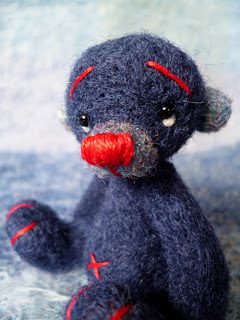 A bear however hard he tries
Grows tubby without exercise.
Our Teddy Bear is short and fat,
Which is not to be wondered at;
He gets what exercise he can
By falling off the ottoman,
But generally seems to lack
The energy to clamber back.

Now tubbiness is just the thing
Which gets a fellow wondering;
And Teddy worried lots about
The fact that he was rather stout.
He thought: "If only I were thin!
But how does anyone begin?"
He thought: "It really isn't fair
To grudge me exercise and air."


A bear, however hard he tries,
Grows tubby without exercise.
Our Teddy Bear is short and fat,
Which is not to be wondered at.
But do you think it worries him
To know that he is far from slim?
No, just the other way about -
He's proud of being short and stout.

Love it Alistair. I'm getting too sentimental in my old age.

Well, well, well. Thanks very much. A bit unexpected but thanks anyway.

Let's put it down to you becoming a Grampa will we? lol.

awww... such a beautiful thing. x

Aye - it brought a great big smile and a warm fuzzy feeling to me when I read it again too.

Have a good weekend EP.

MikeWJ at Too Many Mornings said...

You seem very sweet and soft for a Scotsman.

Aw, LOVE it! A ray of sunshine on another wise dreich Sunday morning!

MikeWJ - Ha! I'll have to show this comment to my wife! Of course I AM very sweet and soft as are all Scotsmen. The rest is just a front......

Jane - Cheers pal. Glad to brighten up a cold morning. Hope you've got your semmit on!

Love it Al (and the picture). I am about to go for a walk myself, to "reduce the unwanted stout"!

Haha - no semmit required, just a roaring fire and a visit from the grammar police.... This is not a clever dull day, it's 'an otherwise dreich' day!!

Ah... When We Very Young, my mother read us these poems at bedtime.

BB - could do with the same m'self. Hope it went well.

We Canadians love A.A. Milne and Winnie the Pooh.

I have a friend who posts conversations between Pooh and Piglet on Facebook, and I thought your bear in the poem sounded familiar :) A.A. Milne - such a gem of a writer.

That little stuffed bear is sweet!