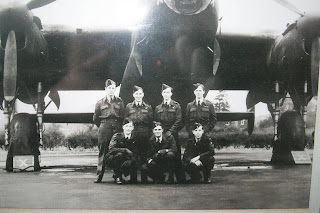 On 13th February, 15 aircraft of 153 sqn were sent to attack Dresden. Departure time was 2100 and after climbing clear of the airfield they made for the bomber stream collection point and on out over the coast at beachy head. Although afterwards it became the subject of considerable and continuing debate due to the enormous damage, high civilian casualty rate and that the end of war in Europe was in sight, as far as the crews were concerned this was just another attack in aid of the Russian armies, on which (because of the distance involved), only a comparatively small bomb load could be carried. Thus each crew took 1 x 2,000lb bomb plus 1,800 incendiaries. In clear weather and aided by gale force westerly winds, it took just over four hours to reach and bomb the target. There could be no argument over the effectiveness of the attack - a massive firestorm (more intensive than that on Hamburg in 1943) swept the city, and could be seen from 100 miles by crews on their 650-mile homeward journeys. They had plenty of time to observe. Some would never forget that long night and the desperate struggle home. 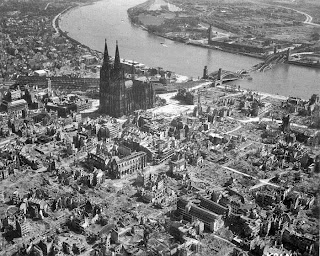 The reality of bombing

153 Squadron Leader JW Gee, who flew this mission, gives the following account of the raid in his book 'Wingspan' a history of his wartime career. Dresden was the 13th sortie of his 2nd operational tour.

"The weather was very clear with gale force winds blowing from the west. After we had crossed the coast and set off on our first leg, the wind was so strong that I believe this, combined with other diversionary tactics, confused the Germans so much that they were totally unprepared for the attack. We reached Dresden only four hours and fourteen minutes after take off. The Germans may well have thought that we were just a few Mosquitoes on a spoof attack and not the main bomber force. {the outbound airspeed was exceptional due to the gale force tail winds} Whatever the reason we arrived over Dresden without any opposition. The weather was clear, and the attack so swift and so concentrated that the town was ablaze from end to end in just minutes. The high winds fanned the flames and caused the rapid spread. 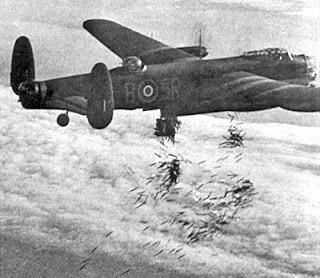 The following wind carried us well over the target further into Germany and after turning for home it seemed ages before we passed the blazing city. We now had the strong wind to battle against on our homeward flight and it seemed that we were making no progress at all. Dresden was still on fire and we could see it for more than forty minutes as we battled against the wind. Our ground speed was 160 miles an hour less than it had been on the outward journey. We struggled westwards, making changes of course here and there to avoid heavily defended areas but always the wind was slowing us down. The sky began to lighten from the east and as dawn was breaking we eventually reached the channel coast. We were running short of fuel and I considered landing at some aerodrome between the coast and Scampton. After talking it over with Charlie Saddler {flight engineer} I decided to press on and we finally reached Scampton and landed at 0705hrs with our tanks registering zero. We had struggled against the wind for five and a half hours of the nine and three quarter hours flight.

So ended my 13th operation and I breathed a sigh of relief. Once again I gave 'U for Uncle' an affectionate pat as I climbed out and stretched my legs before getting on to the crew bus to head for debriefing.

Some of our Lancasters were forced to land away from Scampton due to fuel shortage along with many others from other squadrons. Tom Tobin flying 'W for Willy' switched off two of his engines, feathered the propellers and completed the last few miles to Scampton on two engines in an attempt to save the last of his fuel. He came straight in to land without doing the prescribed circuit with his last few drops of petrol. Tom had done this based on the calculations of his flight engineer. All was well in the end but what a struggle!

Since the war, the pundits, with the benefit of hindsight have been very critical of the bombing of Dresden. Whatever the rights or wrongs, its very easy to be wise after the event. If we had the benefit of hindsight no doubt many things would have been done differently or not at all. Suffice to say that in 1945 we were engaged in total war against the Nazi scourge. As aircrew, we did as we were ordered. To us it was just another mission that we carried out successfully, and we did not think of it as anything else. We were only concerned with winning the war and hopefully surviving to be able to live our lives with our loved ones." 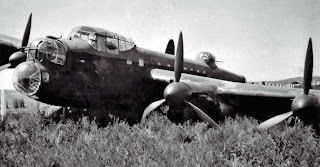 Many of the exhausted crews did not know that within 13 hrs of landing, after debriefing, food and some much needed sleep, the next sortie would be on its way.

Its a sobering fact that between Dresden and the end of hostilities only some 10 weeks away 40% of 153 Squadrons crews who took part in this raid did not survive.

Hari Om from Mumbai. Alastair, I am new to all this blogging business, but am being guided well through whatever gods reside within Google - as an expatriate Scot-Aussie citizen- Indian resident it's a joy to find a page where I can reconnect to my roots!(Family is in Edinburgh).

I loved this post today as I have a special interest in WW2 history and particularly the "air war". This very personal account is superb. I have had the great privilege of nursing some veterans of this time (albeit Aussies) and to hear their stories is both an honour and, I believe, a duty. Lest We Forget.

A very tasteful blog and I have 'joined' your group.

It is always strange to say `Great post` to something written about such a horrer as war and the subject of the Bombing of German cities during WW2...
But you always do put it in words so well the hardships of those brave young Bomber crews and what they did very well Al...
Your 153 Sqaudron, and your fathers story is some of the best blog posts i have read...

It was outright war and it had to be done...

Yamini - {what an unusual - and lovely - name} Greetings from a cold, damp and miserable East Lothian!

Welcome to the blog. Always nice to see a new face and hear a new voice. Thank you very much for those kind words about the blog. I'll be glad to make you feel somehow a wee bit closer to home if I can through my witterings.

The WWII stuff was my way of coming to terms with losing Dad a few years ago, finding out about things he spoke little of. If the air war interests you there's plenty here for sure. My Grandfather too shares a link through WWI where he served in Gallipoli, like many of the ANZACS.

I hope you enjoy digging around and will be delighted to hear your thoughts on anything you find.

Thanks Buddy. I know you always get it.

Pint soon would be great.

Sensitively written as always, Al. One somehow hovers somewhere between pride for a father's job well done, and the sobering realities of what that job really was all about.
Thanks for reminding us what we owe to men such as your father and grandfather, (and mine) while not glossing it over or glorifying the whole business.