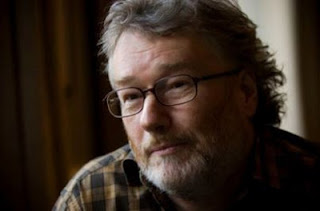 This is a repost in memory of  Scots writer Ian Banks who died of cancer today at age 59.

Tonight it was back to Edinburgh and the book festival for one of my favourite authors, who also happens to be one of my favourite raconteurs; Ian Banks AKA Ian M Banks. Ian's a novelist in both mainstream fiction and sci-fi, where he uses the Ian M Banks moniker. Unusually for the book festival, tonight there was no reading from an existing book or a work in progress, merely an extended interview and extended Q+A session.  The evenings event was sponsored by Highland Park malt whisky so free samples were on offer as you came in the door, but as I was driving - and had already had a beer with our dinner beforehand - I declined, or more accurately - postponed - as I have a small one beside me while I'm writing this.

Ian was on fine form. In fact he was so animated and so different from his laconic self at previous events that I think he had perhaps tried a few samples of his own before the off. {who can blame him - sip - it's lovely stuff and he is an aficionado of malt whisky, having written a book on the stuff!}  The interview, more of a monologue with a few interruptions in reality, was highly entertaining as Ian gave free rein to his wit and experience in response to the questions and showed clearly how his imagination allows him to both create and handle multiple threads and yet retain the ability to tie them all neatly together before bringing the subject to a close. I've long admired his socialist principles, something that I like to think that to a large extent we share, and the way he holds these close in his writing - he put an embargo on his books being sold in Israel in protest at the recent forced boarding of an aid ship bound for Palestine and famously also cut up his British passport and posted it to Tony Blair in protest at the invasion of Iraq. He was challenged on this latest protest by a member of the audience and responded by explaining that while he had a great admiration for Israel in general and Jewish culture in particular, that he did not feel that he could stand by while they mistreated their neighbours in such a callous way and that of all cultures it was a shame that the Jewish people, who had suffered so badly at the hands of others, would allow themselves to treat other human beings in the same way.

Politics was a large part of the nights discussion, and he freely admitted that as he gets older he is becoming an increasingly angry and a typically curmudgeonly,grumpy old man. {See any more similarities between us here anyone?} He was particularly scathing on Capitalism, the bonus culture and the way the new government is proposing to deal with the recession;

" Take the National Health Service, it's there to care for people, to make their lives better, to make a difference. Now look at how government is acting. According to them public ownership equals bad - old fashioned, inefficient, ineffective, a drain on public resources. It has to be made to work better and the only way to do this is by privatisation. This means that it has to work harder, to deliver more with less resources and it has to deliver a profit to its shareholders, be managed outwith public control by people who have a clear conflict of interest between public good and private profit. According to politicians this is the best way forward possible. Control of this edifice is simply not possible by people who simply want to operate solely for the benefit of the general public, who have no purpose other than meeting a social need or making a better, more caring society.

Now, ask that same politician why he or she went into politics and they will tell you without exception that they want to make a difference to peoples lives, they want to make things better, build a better society, give something back to society, etc etc etc.............

To me, something doesn't add up here........... if we apply the same principles to them as they are to others, shouldn't we be privatising politics? But suggest that to any one of them and what do you think the answer would be? " *

All in all a highly entertaining and thought provoking evening.

You can read his wikipedia bio here or an interview here

Fine words and such honesty is rarely honoured. Wonderful music to accent it!

May your week be peaceful. YAM xx

Thanks Yamini. Yours too!

Plenty of sad Facebook posts about his death on this side of the pond, as well.
I remember reading this post when you first posted it. Nicely done.