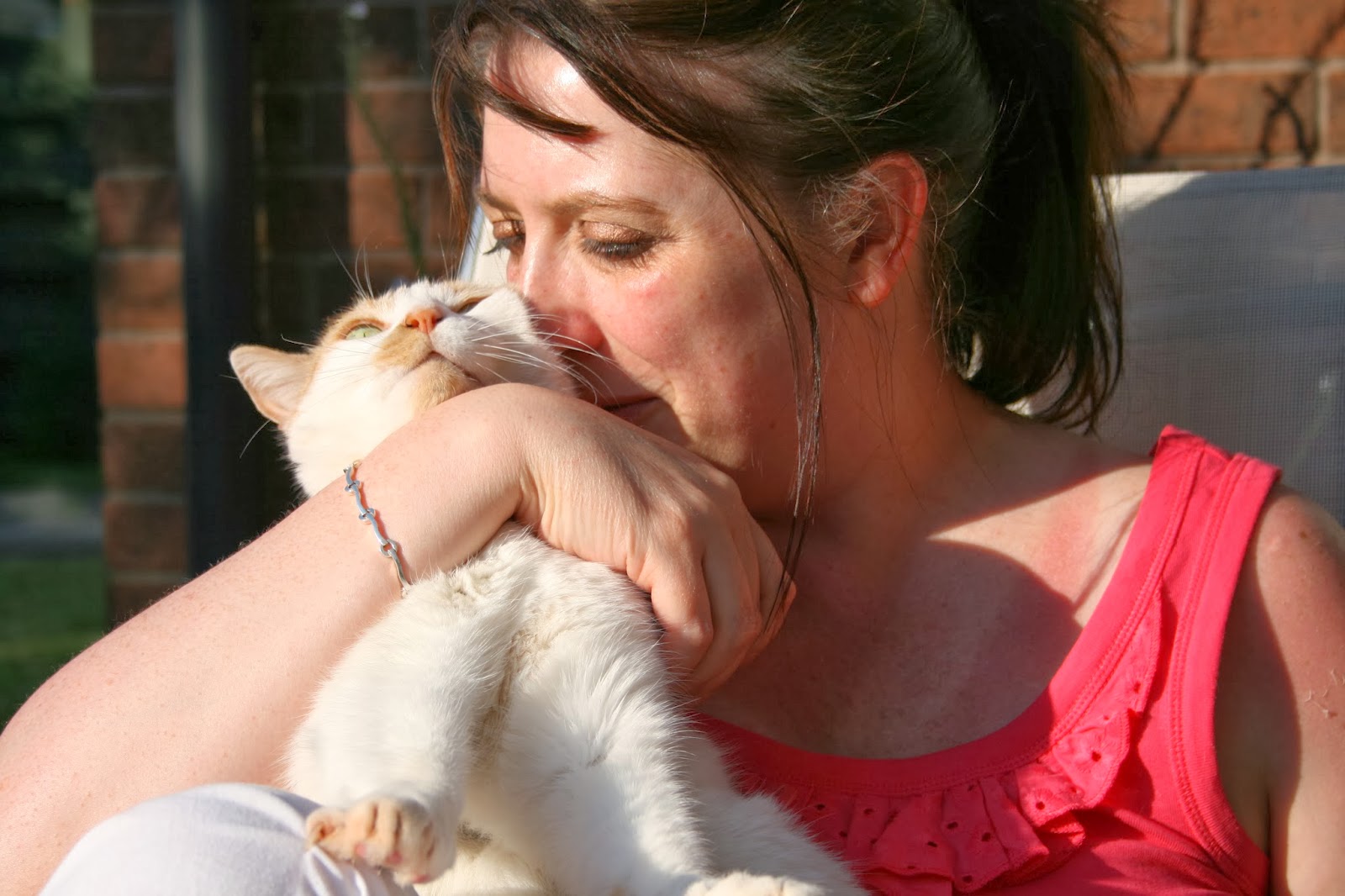 Jess and G. My two girls.
A story of our cat who died peacefully sleeping on my chest last night age 16. First posted 2010


A paw lands softly on my thigh. I look down from the laptop where I sit blogging away insomnia and am met by two huge luminous green eyes engaged in unblinking human contemplation in return. She is beside my chair here at the kitchen table, illuminated by the glow of the lamp which is the only light in the room. She stands on back legs, holding herself erect with her right paw against the chair seat, leaving the other to deliver a gentle tap to the top of my thigh which is feather soft  yet by its very softness, reminds me that there are claws behind it which can be deployed against tender flesh if needed.  The eyes narrow and a pair of whiskered white cheeks move as they funnel a quiet, soft and manipulative miaow in my direction as she repeats the movement, emphasised by a slight deepening of those same green eyes, an act which only seems to increase their concerned impact.

I left her sleeping beside The Lovely G a couple of hours ago when my twisting and turning threatened to wake them.  {experience has taught me that waking either of them in the middle of the night isn't a plan to be described as good.}
I murmur 'good morning' as I reach down and scratch behind her ears. Her head tilts against my palm and fingers with approval, turning and twisting to achieve the desired effect as we exchange greetings, her and I together for a mutually pleasant moment or two before I leave her and turn back to coffee and computer. She sits back down beside me and as I begin to type I wonder if she will head to the utility room a few yards away where I have already filled her bowls with food and fresh clean water.

Engrossed in what I am doing I'm startled when she appears sitting beside my elbow, a place and position she has reached in one with an impressive and silent leap. Not bad for an old lady. She contemplates me anew and surveys the content of my efforts. She's not in the least impressed and purrs a few suggested improvements in my direction, nudging my arm to hint that perhaps I should get started on them right away. As I obey she rubs an approving cheek against my bicep with her eyes fixed on the screen to make sure of typo-free amendments before resting her head on my shoulder as I carry on typing and reviewing, typing and correcting, in my stilted two handed, four/sometimes five/rarely six - fingered typing style. Approval is purred directly into my ear.

Job done she is bored now and stands to step over my right forearm into the circle of me and computer, standing full, obliterating my view and turning, tail raised, to show me proudly how clean her bottom is.

"Aye, very nice Jess! Lovely! Thanks for that."

She turns and repeats the maneuver from the opposite direction as if  to show the effect is the same from any angle before folding herself into a curled position with her back against my chest, stretched out from left to right round the support of my arms. She proceeds to raise a front paw and begin her morning ablutions by fastidiously running her teeth through the fur of her forearm and licking the tug free area back down to run in the right direction. She stops and looks at me for a second, not understanding or caring that this is not the best place she could be doing this - in my humble opinion. "After all," she seems to say,  "what could be better than writing about a cat - and you only ever see what's right under your nose!"

I continue to write, half-heartedly now as I watch her, engrossed in contortions to reach each and every recalcitrant hair, impressed by her methodology and feline thoroughness as she clears tugs and straightens hair, moving on to the next only when catty approval is reached after close inspection. I find myself wondering if she would be equally impressed with my own shower technique.
Probably not.......

I reach for my coffee to find it's cold. Time has moved on and dawn is softly pushing a hint of pale amber through the window at the end of the kitchen. I'm suddenly tired and Jess is looking expectantly at me once again. Even before I move for the light switch she is up and moves to sit at the door to hall and stairs. Her eyes turn to me once more as she steps aside to let me pass. As I take the stairs to the bedroom she is two steps behind. Somehow I know how a sheep feels being herded expertly towards its pen by a collie dog.

I know my place.

By the time I have shed my clothes and climbed quietly into bed beside my Lovely G,  Jess is already there, curled in a ball and apparently just as deeply asleep as when I left them a few hours ago.

Email ThisBlogThis!Share to TwitterShare to FacebookShare to Pinterest
Labels: jess

I remember reading this beautifully crafted essay when first posted. It loses nothing on re-reading.
You will miss your Jess. Animals take up a large space in our lives--cats far more subtle than dogs in their companionship, keeping their own sense of mysterious completeness even as they demand our attention and give of their own in return.
Our sister cats, Eggnog and Raisin, are approaching their 16th birthdays. Both have become physically fragile, but have certainly not diminished in personality. I dread the day when they will leave us and can only hope that they will pass quietly at home as your Jess has done, without a last stressful journey to the vet.
A home without a pet is perhaps a tidier place, but a less welcoming one. I trust there will be another cat for you and G.

Thanks MM,
I'm sure there will be in the future but maybe that will be a while away. You're so right about how subtle cats are compared to dogs.
She'll be missed that's for sure.

I echo everything that Sharon has said. You are so fortunate not to have that dreadful "trip to the vet's" with her and she died where she felt safe and happy, and on her own terms. Your world will seem emptier without her, that is for certain.

I hope another cat will find it has a future with you. We have a permanent procession of homeless strays wending their way to OUR door.

Meanwhile, holding you and G and Jess's memory in my thoughts . . .

Thanks BB. Thanks very much.

Ocht, I'm sorry to read that you've lost your lovely Jess. But, as the others have said, what better way for her to leave than by slipping off to sleep while lying comfortably on your chest. She'll leave a big gap in both your lives, but how lovely that you're left with so many beautiful pieces of prose that were inspired by Jess. I'm sure they'll provide you with a great deal of comfort in the future Al.

Cheers Jane. You're so right.

Alistair, I feel your pain. Literally. So, so sorry.
Best advice someone gave me: only cowards don't cry. At least she had you.

Let yourself grieve. Took me awhile.

Seems like she's still been here this week, peeking round doors and jumping down from her bed in the utility room. Very strange.

I am so sorry for your loss! I remember reading this when you posted it the first time, and sharing it with my Sweet Husband. She was a lucky cat and obviously well loved.
Being loved in return by a cat is a very special thing. Reading this reminds me of losing our Amoke. She has been gone for years, but still there is an Amoke shaped hole in our lives.
Thank you for sharing part of her life with us, your posts about her are all wonderful.
Kat

She was, just like her sister Bailey who died a few years before, a wee star and we absolutely know we were privileged to have both of them. It's been a week or two but I still see her sometimes: just the tip of a tail disappearing round a door, or hear a quiet miaow from the hall. These are comforting and painful by turn. When we're ready no doubt others will come and stay too. That'll be a wee whiley yet.