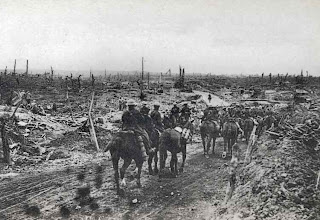 
We observed the 2 minute silence at 11.00am as did millions of others and like many considered the loss and sacrifice of millions of dead and injured in many countries and from many war in those private moments.

I thought selfishly of my own family and was grateful that for all the involvement we had our folk returned to us to carry on with life and love. Most are gone now but their families live on and grow in many ways.

This year, as the last of the Tommies died, there has been much remembering of the first world war as the direct links have now been broken. It brought back many memories of my own Grandfather who served in the Royal Scots Fusiliers.

This from the history of the regiment by John Buchan.

" The enemy second line having been won from Pozieres to Delville Wood, the next main objectives became Pozieres and Guillemont - the first because it was part of the crest of Thiepval plateau and the second because its capture was necessary before we could align our advance with that of the French. Guillemont presented an ugly problem. The approach to it from Trones Wood lay over perfectly bare and open country.
The attack was delivered by the 89th and 90th brigades and in the latter was the Manchester regiment and the Royal Scots Fusiliers. The Fusiliers assembled just east of Trones Wood, an indifferent jumping off ground - with D company in trenches north of Guillemont - Trones Wood road, A and B companies were south of the road and C in an improvised trench near to D. The frontage of the battalion was about two hundred and sixty yards.
The attack started at 4.45am and almost from the first things went wrong. The Manchesters were late in starting. Colonel Walsh was to move forward in support with the Fusiliers battalion headquarters and two companies of the 16th Manchesters but the two companies never appeared, and communication with the first wave very soon became impossible.
Meanwhile the Scots Fusiliers had made straight for their objective, but the advance on both their flanks halted, and presently they were a lone spearhead without support. There was a heavy enemy barrage on the east front of Trones Wood and the Guillemont Rd was swept by machine guns. It would appear that D company and about one third of A company reached the east side of Guillemont village and that B and C companies were on the western face.
The commander of D company Lt. Murray, forced his way back to headquarters about noon to say that without immediate support the battalion would be cut off. He himself had been right through the village. But there were no adequate reserves available and soon nothing could move and live on the ground between Trones Wood and Guillemont. Everywhere, except in the Scots Fusliers sector, the attack had failed, and the battalion had to pay the price for its lonely glory. Colonel Walsh could do nothing but hold the trenches east of Trones Wood until relieved on 1st of August.
The Royal Scots went into action with 20 officers and 750 men. Of these 3 officers and 40 others, chiefly headquarters staff, remained with Colonel Walsh at the close of the day, and later nearly 100 others dribbled back through another brigade. The rest of the battalion were dead, wounded or captured. Total losses were 633 men.

The division commander wired to Colonel Walsh during that day 'I cannot tell you how grieved I am for the loss of your splendid battalion and above all for those still left in Guillemont. They did grandly and all that men could do'

The scanty remains of the battalion moved north on 11 August to Bethune, where for two months while it regained it strength it stayed in a relatively quiet part of the front."
at November 09, 2009

Hello, Al; Thank you for reading my remembrance stories posted this week. I read this post with my coffee and shared some of it with my husband. I'll be back to read it yet again. Whatever your former occupation may have been [?] I like the way you write and organize your blog offerings.