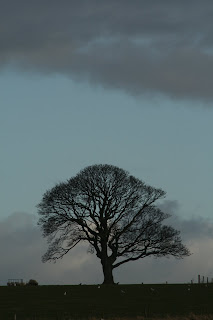 The tree at the top of the hill
Hullo ma wee blog,

For the last few days, in fact since Saturday evening when the Lovely G and I got home from the meal with Gordon and Charlotte after the air show, I have been suffering from flu. I've been here before, of course. In fact I feel like I have been here much more often since I became unemployed than I ever did when I was working. I genuinely can't recall actually being so ill as to be off work - except for recuperation from a knee op {when in reality I worked from home} - anytime in the last three years.

I almost feel like a fraud. It's like my body has given permission to shut down because it doesn't have a job to maintain or anything more worthwhile to do. While I have been telling myself that looking for work is really important and that I am focused on just that my body has said 'Oh yeah? Well have some of this sunshine.'  In the normal course of events - well in my working past that is - I very rarely was ill and if I was, well I just worked through it didn't I. After all I had places to go, people to see and stuff that just had to get done. That was the kind of attitude that also meant that anytime I was on holiday I would invariably end up with a cold or something two or three days into the holiday, as if my body had suddenly cottoned on to the fact that I was on free time and exacted a penalty for ignoring it up till then. Actually, now I think about it I do remember working from home a couple of times when long car journeys didn't seem feasible for whatever reason, but regardless I always ended up still working. Yet for the last few - 5 days now actually - I have been literally floored by this bug and have simply ceased to function on anything other than the most basic level. I feel as weak as a kitten and even Jess - the runt of the litter - could no doubt take me with one paw tied behind her back.

Today though, for the first time in days, I have opened up the laptop and felt able to even think about posting something. I have looked at a few postings from blogs I follow but have been so thoroughly unenthusiastic that I haven't been able to respond to some interesting stuff that's been posted except in a mere one or two almost ignorantly short instances. Even today this damned wee bug has still firmly got me in its grip, perhaps not quite so tightly as two days ago but it sneakily reminds me just how close it still is by sending me on coughing spasms which seem designed solely to remind me just how much pain my rib and stomach muscles can generate, or by sending small barbs of pain into my skull when I simply run my hand down from my forehead and my fingers brush my eyeballs. Whatever this bug has been, it's a doozy! I still cant be more than a few feet away from a box of tissues even if I am using them much less than before and found myself standing in the shower this morning with the shower head adjusted to a concentrated spray and the jet directed straight into my face in an unconscious attempt to massage my aching sinuses. I have taken pills and potions, decongestants and lemony drinks till I'm sure I'm now part lemon myself and even spent the best part of an hour yesterday self inflicting my dreaded childhood treatment of holding my towel covered head over a bowl of steaming water - granted with some olbas oil in rather than the old way of dropping some Vicks vapour rub into the water - all to very little effect.

Even now when I cough or have one of those blooming sneezing fits- ignoring the pain from the ribs - I get tremendous sensations of ringing in my ears and that weird out-of-body/off balance/seeing stars sensation you get where you know that the pressure created has just blown yet another few precious brain cells to smithereens because the normal escape channels are just not doing their job. After the last five days I'm surprised there are still enough of the little blighters still working. Thankfully, for the last two nights I have actually managed to get some sleep - and last night I actually slept better than I do 'normally' surprisingly enough - after three days and nights of sleeping only in short fitful and unhelpful bursts. Also, unusually for me, my appetite has completely crashed and I have survived on a small plate of bran flakes and couple of apples a day {PLEASE let me have lost some weight after all this!!!} At least my digestive tract will be in order hopefully. Actually, just between you and I, there is a definite down side to the last few days diet which has come to the fore, but let's leave it at that shall we?

Now, the sun is shining. I'm going to put on my shades and go and sit quietly on the patio for a moment or two. I'll no doubt be apologising to the local wildlife for my lack of attention over the last few days while I look forlornly at how the grass has grown, knowing that I'm in no fit state to cut it and yet we have visitors coming this weekend and the forecast is for rain over the next two days as well. Will I pick myself up and just get it done?

I honestly have no idea.

Bugs like the one you have are the pits aren't they? I hope you are on the mend now, but sounds like you need to just rest up for a few days more and let it work itself out of your system.

Then I give you full permission to travel down South (well, to Wales) with a large caber, which you can then stuff down the throat of our estate agent - or you could knock his block off. I'll leave the choice to you! The exercise will do you good : )

I swear by brandy for nasty germs - helps you sleep at night, if nothing else!

Funnily enough Al,, now that you mention it ,, I have suffered much fewer cold, 'flu stuff since I "retired" some 10-years ago now !
( Wow, can it possibly be that long ? )
And like you I would help spread it by working thro' it !!
I think it's now being out of the office with all those other colds & sniffles always doing the rounds somewhere ..
What you need is a good outdoor hobby young man ! Can I interest you in GOLF ? :) Tee-hee
Get well soon ,, Missing your blogs !

Take you time and get well.

Thinking back I realize there were perhaps two or three blocks of time in which I caught everthing respiratory that was going around, but now haven't fallen victim to such in years.
I have always found that traveling makes me vulnerable, if anything in the way of a germ is about.
What can one do except suffer through it and try to bolster the immune system [?]
Will hope to read that you are well soon.

Hope this finds you on the mend and sourcing some industrial strength vitamin tablets!! :-/

Oh dear. You poor thing. I recently had a sinus infection, so I know how you feel. And on a positive note, good sleeps often mean your body is on the mend, as I certainly hope yours is. I think the challenge when sick is to 'let' onself be sick, but I'm not very good at that. I generally comfort myself with a lot of good movies. I hope you feel better soon!