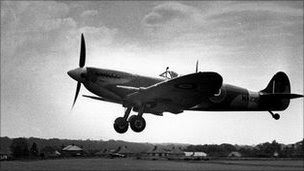 The 70th anniversary of the Battle of Britain was yesterday marked by a reading of one of Sir Winston Churchill's most famous speeches and a fly-past. Actor Robert Hardy read extracts from Churchill's "so much owed by so many to so few" speech, precisely 70 years after the address in Parliament. The reading outside the Churchill War Rooms was followed by a Spitfire and Hurricane fly-past over Whitehall. To hear him and see the flypast go here.

The RAF defeat of the Luftwaffe as an offensive force was a key turning point in World War II and there have been a number of commemorations this year as the remaining few are generally now in their 90's. You can see a joint flypast with a Lancaster and Spitfire in commemoration here and a lovely look at the qualities of the Spitfire as an aircraft in this short trip by BBC correspondent Evan Davies in a restored Spit by clicking here.

listening to Supertramp 'Take The Long Way Home'
at August 20, 2010

Very interesting. As you know, I love those old airplanes and with aviation history.
Have a great weekend,
Kat

nice wee post Al, under a 1000 men im sure it was that fought flew fighters in he battle, have you read "the last enemy" by Richard Hillary?, first book i have read written by a spitfire pilot,
thanks for the links,

Cheers Kat, glad you enjoyed it. Have a good weekend too.

Hi CK, - I thought there were about 3000 in the BoB and losses ran at about 30% over the period. It usually considered to have taken place between 10 July 1940 and 31 October and focussed around S England but in fact the first attack on british soil took place a few months earlier when German bombers from bases in Norway attacked Rosyth Naval Base on 16th Oct 1939.

They were engaged by 602sdqn based at Drem. Two JU88's were shot down. Two of the German dead, Under Officer Kurt Seydel, 19, and his Observer 17-year-old August Schleicher are buried in Portobello Cemetery.

Yes, we are indeed reaching the end of an era. My own grandfather, now deceased, went over to England to instruct soldiers in operating anti-aircraft machine guns. I have a beautiful bracelet made of silver coins linked together that he had made for my grandmother while over there. I also inherited a silver spoon with the face of Winston Churchill on the top.

CK - sorry forgot to say I've not read that one. Good is it?

Rebecca, Like you I have mementoes from both 1st and 2nd world wars that I treasure for teir connections. The small silver coins might be silver thruppenny pieces which went out of use in the 50's or early 60's I think.

A great post as always Al. The perfect choice in Robert Hardy to read it don't you think?

Hi Jono - absolutely. He is the perfect choice having played the man so many times. I wondered if whoever invited him to do the reading expected him to do it in character? I think it's better as it is here though.

Oh man I feel like I should have known that date was important. Bad me. I'm becoming rusty on all my military history.