Last night my brother-in-law Leonard, AKA Leen,  stepped into his ill girlfriends shoes {nice heels by the way, Leen}  to come with me to The Book Festival event with Christopher Brookmyre, another of my all time favourite Scots authors and raconteurs. It's been a great festival so far and tonight held firm promise of this continuing as Chris has never failed to impress on any of the dozen times I've heard him speak at this kind of event in the past. Chris is a very different proposition compared to authors like Ian Banks or Ian Rankin being a scathing satirist with very firm anti-authoritarian/establishment and anti organised religion views. His books are breathtakingly sharp, bloody and irreverent in the extreme. They've been labelled  'Tartan Noir',  are certainly not for the faint hearted or easily offended, yet are both excruciatingly funny and uncomfortably insightful when looking into the abyss of those corrupted by power, greed or even the modern facade of  newspaper feted 'celebrity'. A Brookmyre book is strewn with  bodies, gore and expletives in a way that is often visceral, certainly creative and often indulgent yet at the same time can be weirdly restrained and considered, even occasionally innocent. A skewering, literal or figurative, from this mans pen leaves no-one in any doubt that there has been indeed a skewering of humongous, even biblical, proportions. His books are laugh-out-loud bundles of absurdity, yet are carefully, skilfully crafted, populated with character traits familiar from anyone's life and jammed full of twists and turns in a clever plot-driven pastiche of reality that's just close enough to the real thing to make you sure that much of what's going on between the pages could probably happen out here right now without too much help from anyone else given just a few changes in circumstances.

If murder, mayhem and witty one liners are your thing and you've not bumped into Christopher Brookmyre's work before, then consider giving him a shot at the title....... 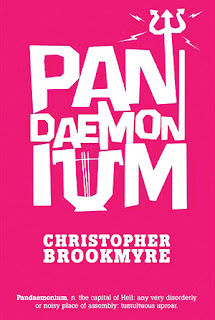 The night started off with a few stories from Chris about writing, being an author and public speaking, all in his typical robust , tongue in cheek 'call a spade an effing shovel' style, which oddly detracts not a jot from his wit, intellect or vocabulary.  His latest work is Pandaemonium, which he then went on to give us a reading from. It's a bit of a departure from his previous works {this is his 13th book} in the crime genre, with its theme of debunking religion, God and the Devil.

It's a book in which vengeful demons meet grief stricken, horny, angst ridden Scots teenagers on retreat in a remote location and huge quantities of blood get shed in the process - or is it the guise - of dispatching characters and giving demons a good kicking. I mean let's be honest,  in any fight between vengeful demons and your average teenager, demons are punching well above their weight!  But, under all the usual gleeful gore and cheerfully strewn viscera lies Brookmyre's optimistically beating big heart and cheekily irreverent brain cell pounding away with its apparently genetic determination to give the bleeding heart lefties a good poke while the right equally gets the usual swift and deservedly accurate kick in the pants.

On describing it as a Gothic horror novel at pre-publishing event, he was challenged about what made it 'Gothic'. His response was  "Because it's got Goths in". You have to love a guy like that.

With his trademark typically vivid plotting, detailed characterisations and vigorous but considered debate over the nature of, in this case, heaven and hell, all coupled with ample profanity, sex, and copious amounts of cheerful slaughter, teenagers will probably devour Pandaemonium in the same way hordes of us did with Stephen King when we were weans too.

Chris also gave us a world exclusive peek into his next offering, which is still work in progress, via a short reading from "Where The Bodies Are Buried".

A fairly lively Q+A session brought the evenings proceedings to its natural end and a horde of eager groupies followed Chris to the book signing tent as Leen and I headed to the bar in the nearby Spiegeltent for a beer and a chat about the evenings event, books, authors, life, the universe and everything, before I dropped him at Waverley station for his train back across to Fife.

It was everything I'd hoped for and now I'm looking forward to Ian Rankin on Thursday.

For more on Chris, his wiki page is here, website here and an interview with him here.

Excellent. (I bet he looked cute in heels.) Lucky you to be in Edinburgh for the festival. I shall look him up straight away. And Ian Rankin, yes.

(Trying not to be jealous of festival attendees as I baste in 100F+ humid Washington, DC.)

Welcome and thanks for the comment. Feel free to stop by and cool your hot heels anytime. Your right, I'm very lucky to have the Festival with all its facets within easy reach.....