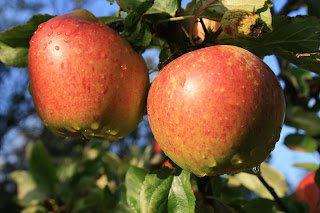 Yesterday, with uncharacteristically perfect timing, I spent out in the garden. {Uncharacteristically perfect timing because it rained during the night last night and looks like it might do the same today} The garden has been a tad neglected of late what with the effects of flu and my intermittent - and usually limited - desire coinciding with the occasional rain shower which gave me the chance to opt out with reduced - minimal even - impact on my somewhat underdeveloped sense of guilt. Don't get me wrong, I enjoy, appreciate, envy even, a lovely garden, but as I have said often enough times before, I am not a gardener. My garden is almost lovely though, more through the creativity of the previous house owners than any effort or talent on my part I'm afraid to say. It has a natural charm and because of the fruit trees it looks productive on first glance and that hides a multitude of minor sins. If pressed, I would describe the look as 'shabby chic', although if pressed further I would probably - definitely - have to admit to more shabby than chic.

We have garden on three sides of the house. Each side has fruit trees; our bountiful pears in front, plums to the side and apple trees to the rear. That makes it sound like a huge garden, but in reality its not, even if it is larger than most gardens these days. Before we bought the house it was unoccupied for a year and during that time the previous owners, who had moved abroad, arranged a limited maintenance. Once our offer had been accepted however, that maintenance immediately stopped and by the time the deal had finally been concluded and we moved in several months had gone past. I had approached the owners lawyer asking for access to the property to maintain the gardens in the mean time as it was very obvious that it was quickly becoming overgrown, but this wasn't allowed, so unfortunately by the time we had moved in, the garden was quite a state. As my job kept me away from home on a regular basis for most of the week, although I made the garden presentable, it had always been just maintained rather than properly managed and as a less than confident gardener, that led to the garden I have today. 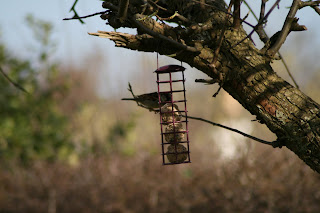 My garden has a natural feel to it. I have always instinctively shied away from the garden preference of my parents, who's garden style could best be described as ' parks and cemeteries', with every perfect blade of  grass carefully manicured to within an inch of its life, each planting in a clinical border delineated by straight lines and 90 degree corners and each plant looking like it had been sculpted by hand to fit exactly in place. Just thinking about it as I write reminds me of how much a chore gardening was when having to help, cutting the grass or worst of all, weeding those damned borders, knowing that at some time Mum would be passing a critical eye over the standard of work that had been done. Eventually I would rebel and she would decide that it was all pointless as she often went back over the jobs I had been doing herself anyway. I hope she forgives me writing her to appear as a tyrant as she really wasn't except in this area, and oddly only for a few years. Shame they had to correspond with my formative teenage gardening years though! {Never thought about that before but it explains a lot somehow!}

So yesterday I carefully mowed the lawns front side and rear. Lawns carefully and thoroughly sown with wild flowers, or as you would know them, dandelion, clover, chickweed and the occasional but perfectly positioned thistle. Actually, on the lower side lawn - Yes, I have a lower side lawn area, how posh is that - ha! - I have what looks like red headed dandelions growing which really do look lovely when they come to flower. I edged the grass with creative insouciance then I weeded the small borders at the front of the house before spending some hours on my knees weeding the drive and the lower parking area -  Not as posh as it sounds that one! - which had sprung large but easily pulled weeds in the perfect growing conditions of the last few weeks. Actually that was a rotten job though as I kept impaling myself on dried windblown holly leaves from that part of the hedge nearby. The hedge and I have a somewhat problematic relationship too. You may remember that last year I almost lopped off three of my fingers trying to beat it into submission ending up in a bloody drive to the doctors trying not to pass out en route. {It was dangerous but necessary I thought at the time. I remember looking down and thinking I hadn't seen so much blood in one place before. When I ran my and under the tap and saw the state of my fingers I nearly passed out on the spot before wrapping them in a towel and grabbing my car keys. A full year on and I still don't have feeling back in two fingers so that may be permanent} This year the hedge is definitely the most unruly part of the garden. {I'm sure the neighbours must hate me for it} I justify it to myself that there have been loads of nests in there and I didn't want to disturb them but in reality it's a bit daunting at about 60ft long and 8ft high. The lovely G has suggested that we get someone in to chop it down to a more manageable size and I didn't disagree with her.

Now, as I look out the patio door to the garden, the dull day has gone and it's calling me to come and spend a bit of time enjoying the birds and the fruits of my labour yesterday. I think I'll sit out a while, potter around and be smug in my little bit of heaven.

Hi Al - just back from a week's holiday today and our garden scares me, given how much the stuff in it grew in that time!

I don't like gardens planted in lines either, I am very much a throw it in and see where it comes up person. I leave the wild flowers into, and heaven help anyone who calls them weeds!

Ah yes, gardens and lawns. We are trying to bring this property under some sort of control. Plantings had been neglected for a number of years as the former owner aged, and things are definitely out of bounds.
J. does all the motorized work--mowing, weed-whacking, using the push mower as well as the riding mower.
I am the hands and knees person. [Groan] We think its worth the work, but it is daunting to realize how quickly "nature" takes over. The results are informal, to put it nicely---

Despite all my complaining I do quite enjoy gardening once I get started and I get a lot of enjoyment from the garden, usually between showers......ha!