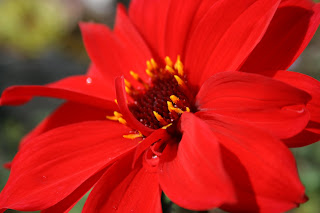 It's not that unusual a sight really. A bride dancing by that is. After all you expect to see a bride dance, especially at her wedding reception. And Lisa was the archetypal beautiful bride, slender and elegant in a stunning figure hugging white dress, her startling blue eyes and the glow of her slight tan lit equally by excitement and pleasure at being among friends and family with her husband for the first time. Lisa and Sam had recently come home from their marriage in the states where Sam's family now live and had arranged last nights celebration for family and friends who could not attend the wedding.

They make a perfect if contrasting pair. They are complete opposites. something that's often said about couples but is rarely so true as it is in this case. Sam is calm and thoughtful, his African heritage shows in an athletic build and in skin that shines from inside. Serenity beams from his face and is communicated by his bright smile, crinkling eyes and a soft spoken voice that hints at a good, and expensive, education. He is the cat who has the cream and he knows it, but he's not about to brag. Sam walks and talks with an even and considered pace as if everything should be savoured.  Lisa is bright and energetic, a petite, pale skinned Scots lass with those aforementioned startling blue eyes and a frank, inquisitive look always on her face.  She's full of the life which beams out of her every pore and shows in restless activity and a mouth which rarely stops talking. What you see is what you get. Rarely will a thought or feeling cross her mind without honest expression. If Lisa doesn't like you, you will know about it. Thankfully the reverse is also true which has brought her a band of close friends, my lovely G included. Always excited and enthusiastic, she communicates at breathtaking speed, vocally, by phone or text.. She lives in the moment, or did until Sam, and then motherhood came along, and likes to have everything organised on her terms. They make, as I said at the top of the paragraph, the perfect pair. They were joined last year by a son, Jacob,  as bright eyed and smiling a wee piece of humanity as you are ever likely to meet.

The reception started traditionally with the bride and groom greeting arriving guests until, with the hall filled, they moved to the dance floor for their first and solitary dance, cheers, clapping and whistles ringing round the room. As guests joined in the evening followed the norm and we celebrated with dancing and drinking, children running round tables, playing chase or hide and seek and young girls hauling Dad's, Uncles and even Grandad's off their chairs as they wanted to dance, dance, dance to every song the DJ blasted out from behind his light-box. People leaned into one another and shouted conversations took place about mutual friends, relations or even football. Intimate groups formed at tables or by the bar as friends and relatives sought each other to chat or catch up. Older relatives congregated together at tables to talk and to watch while the young, the energetic and the deluded stayed on the dance floor.  Time passed quickly and the lovely G and I, who had intended to stay for only a short while as we had a long drive ahead to get back home, realised that we had passed our planned departure time in good company and easy, if loud, conversation with the group of her workmates we were sitting amongst.

By the time we noticed we were an hour behind our planned departure time we had come to a break in the proceedings and, as the DJ announced a short break, the lights came up around the room. Lisa took to the floor with a microphone to make a speech of thanks to the assembled crowd. As she came to the end of this she asked Sam to step onto the floor as she had an announcement just for him. Sheepishly and not, I suspect, without some trepidation, Sam duly made his way towards his wife who began to explain that she had a secret which he had been keeping from him and that she now needed to confess. She had for some time been arranging for a special surprise to come to the reception and that it was now time to reveal her surprise. She wanted to have a performance for Sam. She wanted to find an African dance and music group and had found that just such a group was performing at the Edinburgh Festival and that she had managed to book them to come to the reception to perform for Sam.

The groups name was 'Grassroots' and this would be the first time they had played at a private function such as a wedding, normally playing only full blown concerts. I guess they experienced how determined and persuasive Lisa can be when she gets started.

As she introduced them, drums began to beat and the five performers came in with deep voices chanting, the beating of the drums marking the rocking gait as they slowly passed through the wedding party to take center stage on the dance floor. For the next thirty or so minutes the room was transformed by these imposing performers draped in lion and leopard skin, black and white ostrich plumed headdresses scraping the ceiling as they danced and jumped and cavorted to the native drums and the rhythms they created.  We were taken to sun baked village squares, to royal enclosures and to women working pounding corn or rhythmically scrubbing clothes on river stones by sun drenched riverbanks . As bare feet stamped a rhythm and gourds filled with small stones rattled you could feel the heat of the sun and the dust rising from baked earth. They shook knobkerries and small shields as they sung songs of celebration, of manhood and of rituals from a foreign land and culture. They sung and danced a blessing for a happy marriage and a joyful life. They taught us in the audience to accompany them in the song of blessing, the words echoing across the room from performers to audience and back in hypnotic repetition and as we sang and chanted and clapped to the rhythm Sam and Lisa began to dance, sometimes together and sometimes turning to move on their own, an instinctive and spontaneous reaction to the music and the emotion.

It was mesmerising and I could do nothing but watch as the bride danced by. 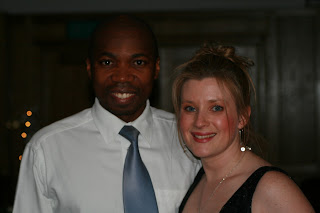 Lisa and Sam.
I couldn't believe I'd accidentally left my camera at home........

It's good job your description paints such a vivid picture then. Nicely done Al.

Who needs a camera with wordsmith skills like yours Al - wonderful piece of writing, I really enjoyed that. I love a good wedding (reception)!

... and I just had to add - the verification word for posting the last comment was ... "comente"!

I love a good wedding myself. It resets my optomism register. Something I need more frequently as I get older.

It can be uncanny how often comment verification does that.

What a glorious celebration and a good omen of happiness to come for the couple. No camera needed, Al. You painted such a picture for us, I could see it all in my mind's eye. Cheers!

Thanks Rebecca, Glad you enjoyed it too. The lovely G was quite taken with it when I showed it to her tonight.......