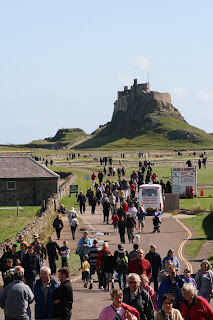 The lovely G and I are outside on the patio enjoying the late afternoon sunshine. It's been a warm day and we have just come back from a short trip down to the Holy Isle of Lindisfarne, about half an hours easy drive southward down the coast into England. There's a causeway out to the island which is often covered by the sea, but today the road was uncovered for most of the day which is good in one way as it meant we could spend as long as we liked there without keeping wary eye on the time but was unfortunate in as much as it gave hordes of others the same idea so the small island was fairly packed with tourists. Eventually we decided to shorten the trip after a short walk and some photo taking to come back here to the garden and the afternoon sun on the patio. 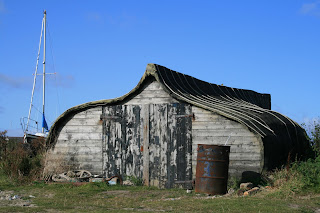 A Boat Shed
I'd  spent a moment or two uploading the photo's onto the laptop and getting us some drinks and a few nibbles to accompany them, just some Asti with lime, a favourite summer drink of ours and a few pretzels and crisps to add some salty tang. We both took a book out with us.  I'm reading Alexander McCall Smith's 'La's Orchestra Saves The World', a nicely paced, gentle wee tale of WWII which I'm enjoying so far.  I wiped down the glass top of the table and covered it in a washable yellow flower-print tablecloth, laid some napkins and coasters and laid out the drinks while the lovely G brought out Jess, long leash attached to her harness which we use to stop her running off as she's done in the past. Once attached to something solid she can be left to wander freely to the limit of the leash. 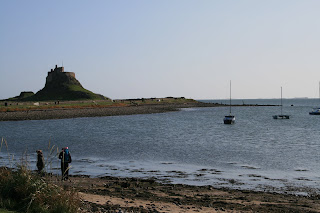 Earlier I'd put out fresh water and filled the bird feeders with seed and fat balls in their spots in the trees around the garden and the birds were busily occupied in taking advantage of the free buffet on offer, at least until Jess made her appearance. This led to a hasty retreat into the overgrown hedge by the gang of  young sparrows who have come to dominate the garden over the last few weeks. Once at a safe distance they began to harangue her but, not speaking the lingo, Jess wasn't too fazed by it. Eventually they calmed down and everything in the garden began to quieten. Jess sniffed around and chewed some fresh grass until, wrapping herself tightly around the chiminea, she could go no further. Once freed by the lovely G, Jess too began to take things easy and lay down on the concrete slabs of the patio which had been warmed by the sun. Soon she seemed to be fast asleep and we could turn our attention back to our books and to enjoying the warmth of the afternoon sun for ourselves. Cautiously at first the young sparrows began to come back to the feeders and enjoy the afternoon feast too. 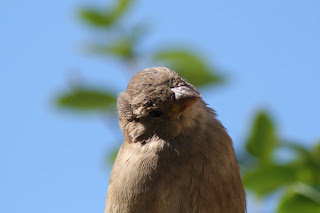 A Cocky Wee Thing.
I read and sipped and nibbled for a while before turning to watch the comings and goings in the trees at the edge of the patio, enjoying the whirr of wings and the increasing bravery of the young blades of sparrow squadron as they became more and more focused on feeding and less on the presence of a startling white cat just a few yards from them. Jess also seemed to be enjoying the scene and appeared disinclined to do anything more than watch. As she did so, laid out on her side with her head raised towards the garden, she sniffed the air, her head slowly bobbing with each inhalation. She seemed to be content just to smell the air, with its scent of grass, herbs and assorted birds. Even when she found the heat of the paving slabs too much and relocated herself over on the grass by the trees, closer to the feeding birds, she was apparently not considered to be too much of a threat by the young sparrows who continued to fly in over her to get to the feeders. It struck me that calm and harmonious as the scene might be, if it was me who was risking life and limb flying in an out over a cat or ignoring it as I concentrated on stuffing my face, I would perhaps be worried and giving her some of my attention. Jess, who seems to be much less lively when on the end of a lead, ignored the comings and goings just a few feet above her head and appeared to have passed out in the warmth of the sun, only occasionally giving a twitch of her tail or raising a white whiskered head in half hearted complaint as a brave - or foolhardy - sparrow. zoomed by. 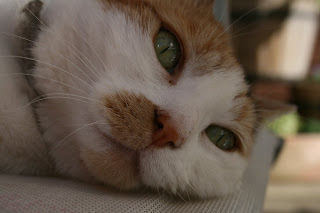 What a lovely relaxing time. Days like these don't happen often enough, to my mind.

A very nice moment in late summer to share with your readers, some of us presently surrounded by school supplies and to-do lists. We also have extremely cocky sparrows in our yard, which we encourage with birdhouses. I think it's time for me to read to A.McCall-Smith again, too....

Oh, this is lovely. And there is darling Jess, dreaming up a recipe. Miam-miam.