Get to France. Glaswegian euphemism or heartfelt appeal?


In this case it's a heart felt appeal as the Lovely G and I get our stuff together for a holiday in a place close to our hearts. Early Saturday morning will see us jet off for a week in the south of France, hopefully in some glorious sunshine but we wont mind too much if there's a bit of rain. This year we are going to be in the mountains in the Ubaye valley of the Haute de Provence region, so I'm expecting cool as well as sunny. Its not a part of France we've been to before so we're looking forward to exploring a new part of this great country. The Lovely G's brother Leen and Karen, his girlfriend and her whole family have gone to Carcassonne this last week on our recommendation and have sent texts and photo's back to say how much they have loved it so far. It's a relief it's gone that way. I would have hated them to go to one of our favourite places and not enjoyed it. It still rankles though when your pesky brother-in-law sends you photos of his beers from your most favourite bar in the heart of the old city telling you how hot it is and how cool, wonderful and refreshing the beer tastes. {grrrrrrr} I know I should be all grown up about it and all that but somewhere deep down my immature, petty, inner child wants to give him a good slap I'm so jealous. Ha! {glad you're enjoying it really}

One of our most fervent hopes is to have a house in France one day so we can spend time between France and Scotland in our retirement. It was a more likely plan before I lost my job and with that 40% impact onto my future pension and no clear view of future finances it looks much more like a pipe dream these days. Still, you have to have a dream, don't you? I can easily still be found whiling away an occasional couple of hours house hunting on the internet for likely places in south or central France. The budget has been significantly cut back these days so that it feels more realistic than just a forlorn hope of course. 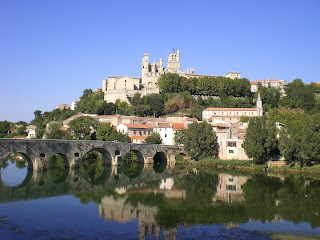 But before the flight there is the usual round of preparations to do. Washing and drying of clothes to be taken, bags to be packed and Jess to be taken to the cattery for her holiday too. We also have the gas system in the house being serviced and a new security system being fitted in the house on Friday too. I'll need to give the garden the once over before we go and try and harvest more of the apples and particularly the pears that seem to be ripening by the hour at the moment. A word with the neighbours will let them know to come and help themselves while we are away too which should help use them up.

Posting on the blog will return when I get back. Unless I manage to slip a quick one in tomorrow that is......

Have a ball you two .,.,
And keep the beloved & I in mind for a wee holiday if you ever get that house in France ?
:)

Have an absolutely splendid time. I've not been to that part of France, either, so expect full report when you return. How wonderful that you have both apple & pear trees (& lucky neighbors, too).

Yes, you do have to have a dream...& you are able to make the trips, still, so that's something, eh?

Who takes care of kitty when you're gone, though? Mine goes with me, but she's a big one for travel. Not really the norm for felines.

Oh my goodness, have a wonderful time for me, too, will you? I have always loved Peter Mayle's books about Provence and hope to get there someday, too.
And yes, it is very important to always have a dream as the man said to his son when he couldn't afford to get him a bike.

I'm sure there will be a post or two on our expedition after we come back from our adventures.

Jess goes on holiday too - to a cattery we have come to trust. She comes back fatter an better groomed than when she went in - and with great expectations about her treatment when back home. { Only to be disappointed }

Whew! I'm glad I'm not the only one who has dreams, no matter how far off, of moving out of the country, even though it doesn't look like a possibility at the moment! Well, yours sounds like you'd be keeping your Scot pad as well. Yes! One must dream and keep your eye on the prize! I'm all for it! Keep dreamin', Al and here's hoping you and the Lovely G are having a wonderful trip :) See you soon!