Getting away from it all. 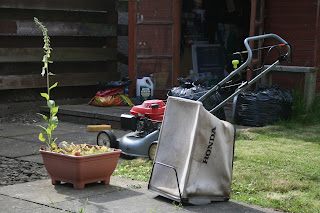 By the time I can post this for you to read I’ll be sitting cosy in the house of my wife’s Aunt and Uncle in a small village in the very north of Switzerland. We’re on a fortnight’s holiday with the other side of the family, relaxing and reconnecting with a special place full of very special people. This year we won’t be doing as much travelling as we have often done in the past. We’ve decided this will just be the chill-out of all chill-outs.


The final day at home was filled with the kind of last minute prep or panic as some people unforgivingly describe it that us men are experts at. In my defence I’d say that years of living away from home have made me blasé about packing and I can do it in about fifteen minutes and as for the rest: weather and work has been against me. The garden has been slowly burgeoning since I last worked out there and has been much in mind as needing attention but every time I’d some time available to do it, it has been raining or the ground still sodden from previous downpours. It’s been a major niggle and I was thinking that I’d never get a chance before we left.


On Thursday I was on a day off work and the weather was good but I’d remembered late the night before I had to go and speak to a group of local authority social workers on the changes to child protection legislation being enacted. I’d been asked to give them a talk on the changes from a Children’s Hearing perspective, especially any issues which had implications on social works required interaction and provision of evidence to allow us to make decisions. Having completely forgotten, I hadn’t prepared anything so spent the morning doing that while the sun shone, then spent most of the afternoon delivering it and answering questions. By the time I got home it was tipping down. I thought I’d lost the last chance and would be coming back to a wilderness in a couple of weeks. With the amount of rain here in Scotland grass grows at fearsome pace.


This morning we woke to clear skies and a cracker of a day. Within minutes of getting up I was barefoot in the garden checking if it would be able to be cut and soon after I pushed the throttle open on the lawnmower. A few hours later I stood back, pleased with the result and almost wishing I could enjoy the rest of the day sitting out there with a cold drink and a good book. Unfortunately that wasn’t on the agenda. A shower and a change later I pulled together the things I need for the holiday and soon after we left to take Jess to the cattery, take a birthday present to one of our sisters in law before heading into Edinburgh to have a meal on the way out to the airport where we were staying nearby to catch a very early flight on Sunday.. 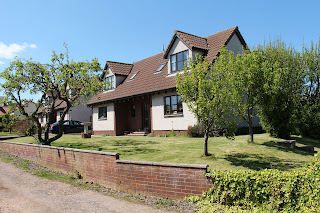 At least I got the grass cut.
The weeds on the drive will be there when I get home.

In Edinburgh we walked from the car park at Waverly, the main train station along the length of Princes Street with the castle for once looming bright in the afternoon sun. It was stunning and the light highlighted some incredible detail in Castle Rock and in some of the historic skyline of the city. Being me {naturally} I’d left my camera in the boot of the car. That was probably no bad thing as I could have spent hours taking photos today but I don’t think The Lovely G would have been too pleased, expecting as she was to have a leisurely walk to a restaurant on one of the side streets. 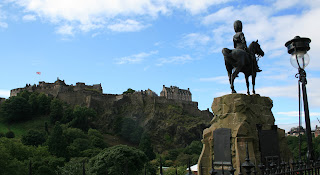 
Edinburgh is a wonderful place and is already seeing the start of the summer influx of tourists. The streets and bars were busy as we walked with people keen to sit out on a sunny afternoon at the kerbside tables that have become a normal sight in town. Normally though the customers are hunched over hot drinks or cigarettes and swaddled in layers of waterproof clothing but today for once there was perhaps the 'continental' feel the city fathers responsible for such stupid planning regulations in our rain soaked part of the world hoped for when they brought such things into the often narrow mediaeval streets, with happy faces and  peely-wally {pale} skin unused to the sun’s rays exposed for probably the first time this year.


Soon those same streets will move from busy to crowded, especially when Edinburgh Festival, the world’s biggest festival of the arts, comes with its annual invasion of more or less talented and beautiful people.. Then the place will teem and every seat at a table in the town’s multitudes of bars and restaurants will be a prize to be coveted by a lucky few. Despite that it’s my favourite time here and I’m already planning some excursions with the camera. 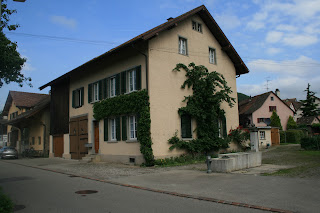 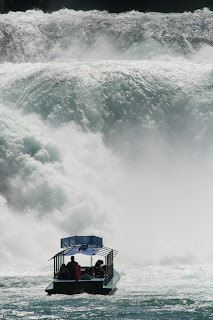 Rheinfall - just a walk away 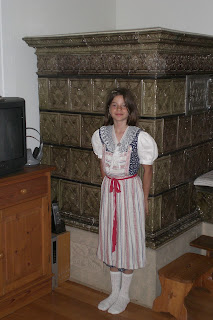 Our niece Julia in traditional costume


It’s all about Switzerland.

such beautiful thoughts - and scenery...

What a lovely bit of armchair [or rather, desk chair] traveling.
It has been a chilly and wet spring here as well--weeds and all sorts of undesirables growing apace while the plants we want struggle gallantly.
Enjoy your visit!

Hari OM
First up - HAPPY HOLIDAYS! -
2nd - you KNOW that grass is gonna have to be done with a scythe when you get back...-
3rd - YYAAAAYY Edinburgh at its best and
4th - but not least - golly Rheinfells - I was there in 1973 and have never forgotten it. Switzerland in general was probs my fave place of the whole campervan tour the family of 6 was doing... (yes S.I.X... in a combivan...) Lucerne also remains a fond recall.

Have a super time and well done on the chill-out decision. YAM xx

dbs - Thanks bro! I'll give it my utmost attention.

Eolist Petite - Just as it crossed the brain cell. Luckily I had photo's to back it up. Cheers!

MM - Thanks you. The weather has been such a pain till now. Saturday at home was a glorious 18C - which is about 65F or thereabouts. With almost no wind - also an oddity here - it felt much warmer. I really was reluctant to leave it, strange as that may seem.
We're here now and I can honestly say I have no regrets......

Yamini - Thank you too. I know about the grass, I know -rub it in why dontcha?

Edinburgh is a great town. You'll get no argument from me on that. Continental style cafes in Scotland - that would be a different conversation! Even in summer you'll probably freeze your butt off except for a few days.

How nice you remember here so fondly. We've been coming for over 25 years and I still get excited to see it again.

Six in a combivan? YUK! {Hope you all left the shoes underneath! Haha.

It all sounds wonderful: your resting up in Switzerland away from it all, then getting back to enjoy the festival in all her glory! Have a lovely time!

Tomorrow, Our arts council will be interviewing a potential artist in residence, who is presently finishing up his masters at the University in Edinburgh. And I think I told you my neice-to-be did hers there as well, in literature.