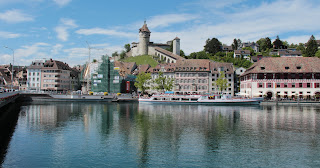 The Munot, Schaffhausen, taken on Tuesday.

The flight to our holiday destination with relatives in Kanton Schaffhausen in Switzerland was as smooth and stress free as these things are possible to be. We checked in on-line, took only hand luggage and left our hotel near the airport with good - but not too much - time to allow us to leave the car in a secure car park, take a very short bus ride to the terminal and walk straight to security. As we passed through the main departure hall the place was thronged by multitudes of people lugging huge cases and an enormous queue that shocked me. It was only 5am on a Sunday morning after all. 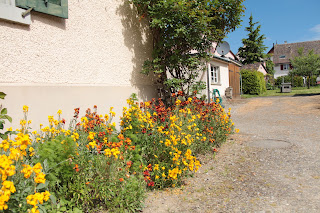 The side of the house. 'Klosterli'  {The little cloister}

Upstairs the line for security was small and we were scanned and through in a few minutes, leaving us just enough time to walk to the departure gate and relax a moment before being called forward to board. Our flight meant a change in Amsterdam and again, once off the plane we casually walked to the departure gate and were immediately boarded onto the next flight. Once landed in Zurich we simply had to walk through the baggage hall and out where we were met by The Lovely G's cousin Martin who was astounded, in a very Swiss way, that we'd managed to get through only six minutes after the plane had landed. That's Swiss efficiency {and luck} for you!

The barn broom
Normally the weather here is much better than back home but we'd been warned that just like us they'd not had the greatest start to the year as far as that's concerned and the forecast for the next two weeks in fairly mixed. That doesn't matter to us though. we've been here plenty of times in the past and in truth are looking for a simple just-time-with-family kind of holiday. The weather is pretty inconsequential. Some sun will be fine but to be honest it's the kind of place that is stunning in any weather. I hope the second week is best, truth be told, simply because we're being joined by The Lovely G's brother and fiance and our gorgeous niece Emily and it would be great to have some sun while they're here so Emily can get out and about with us. 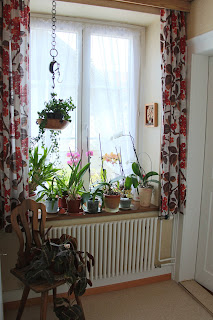 The end of the hallway
So far there's been both sun and rain, plenty of time to relax with family, read books and play about with my camera taking shots around the house and garden between showers. The house is a farmhouse, even though it's in the heart of the old village, and has a huge barn attached ripe for exploring and taking moody photos in. The house, built over a hundred and thirty years ago by Onkel Richard's Grandfather, is bright and airy with an original traditional wood fired heating system. Aunt Margot and he each take a small sack of cherry stones heated in the range to bed with them each night to keep the nights chill away - not that us Scots think the nights are chilly at all! 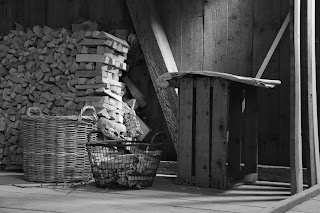 These are a few of the photos taken so far - a flavour of the house, garden and the local town. I hope you enjoy them. 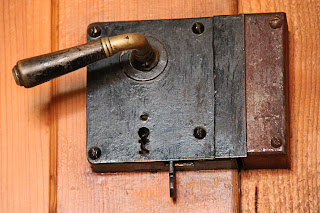 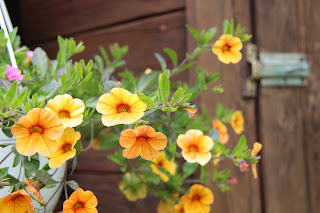 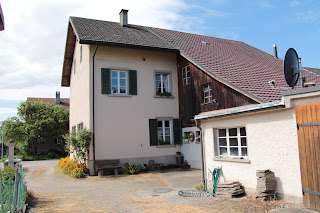 Hari Om
These are 'stunneroonies' Alistair!! Particular faves in YAMs eye are the door lever and the monochrome woodpile. Am looking forward to this holiday - for the reason we get more than Sunday posts!!!! Hugs, YAM xx

Why thank you very much. I'll try to post some other stuff on the holiday as well. If I get the chance - and can be bothered! Haha!

I do get a very good flavour of your holiday place from the photos. It all looks very organizes, clean and so peaceful. I do not see how anyone could not enjoy it!
Have fun with the Onts and Onkels ;)

Thanks Rebecca. It is generally clean and certainly organised. I'm trying to enjoy as much as possible!

Lovely photos, Alistair! Enjoy the rest of your holiday!