A Small Expression Of Disgust. 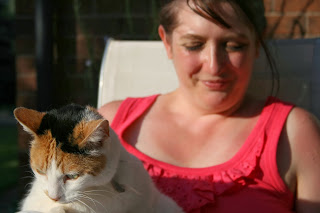 Don't even look at him.


Jess butts her head against my fingers as I rub her neck and shoulders, gently massaging a loud purr of appreciation from her as we spend a companionable minute or two together. She's been restless this morning, repeatedly wandering in and out of the kitchen and its attached utility room where Jess has her bed, food and litter tray. Her litter tray is one of those big covered ones with a flap so she can get in and out. We bought it after noticing that if she was using her tray and either of us went in to the utility room or even passed by the door, Jess would immediately get back out. Obviously she's a sensitive wee soul and, being somewhat the same myself when it comes to privacy, I felt sympathy. The covered litter tray has worked a treat for a few years now and she's been much more relaxed.

If there is a down side it is - how should I put it? Maybe "out of sight, out of mind" would best cover the occasional slip between The Lovely G and I which has meant that there's been the odd dip in regularity of cleaning up and this is what has happened today. Each of us thought the other had done the deed when the reality was that neither of us has leaving Jess with 'ants in her pants'.

Realising what's happened I get her little harness on her and put her out into the garden for a while carefully tethered to a tree via one of those extending leads. She has some history as a runner in her earlier years and now she's a bit older and more fragile I'd prefer not to leave it to chance that the wanderlust doesn't take her again. Anyway, the fierce winds of the last couple of days have gone and it's not too cold, not for one with a built in fur coat anyway. As I leave her, with a promise that I'll be back in a wee minute or two once she's done her business. she looks at me with a 'Really?' kind of glance. I look at the darkening sky and say, "I know. It's going to rain soon. You just do your business and I'll be back in two shakes of a cats tail."

Forty five minutes later I look up from my cup of coffee. " Aw no! Crivens jings and help ma boab I've left wee Jessie outside! Even as I make my way to the patio door I can hear the rain pattering against it and as I slide it open and step out I can see a small white and brown nose  and two huge eyes peeking out at me from beneath the hedge at the back of the garden. I make apologetic and encouraging noises as I cross the garden towards her and she comes out from under the hedge at a fair speed. She's not completely soaked, not 'drookit' by any stretch of the imagination but she's a bit damp  {he says trying to make himself feel a bit less guilty}.  Ok - she's completely 'damp'.

We meet by the apple tree and I unfasten her from her leash so she can head back indoors but oddly she stands there looking at me with what I can only describe as feline disgust dripping from every whisker before taking four or five slow deliberate steps towards the house. With each step she lifts a paw and gives it a shake, spraying small droplets of water around her. The air is heavy with indignation as I follow her dripping tail back to the patio door, rushing to make sure she's not kept waiting at the door. My own tail is firmly between my legs as I slide the door aside and she steps up and into the house, making straight for where The Lovely G is sitting at the table. Jess stops directly in front of her and sits down as if to say " Look what this pillock's done to me!" before reaching a soggy paw up to pat her thigh for emphasis. She gets a sympathetic look and noise from G as I return from the far side of the kitchen with some paper towels which I use to rub her dry under G's disappointed gaze..

Jess arches her back and moves huffily away from my towelling ministrations and starts rearranging all the fur I've managed to disrupt on her back and flanks. I can see I'm going to be ignored for the rest of the afternoon. I can see G eyeing me up too.

I wonder what the cat equivalent of the dog house is?

I'd better get in it right now.

But should I clean out the litter tray before I go?

I'm delighted when you have time to craft an essay. You've captured the essence of feline disdain, which is fairly scathing. We have three boy cats who actually play in puddles, but for most cats being wet is the ultimate insult.

Hari OM
Oh dear. I'd like to sympathise with you... but I think I am on Jess's side!!! Brownie points for the confession though. &*> Hope you are on cuddling terms by the end of the weekend. Happy New Year BTW. YAM xx

Thank you ladies. It's been a while. I must do better this year.

Well, I bet Jess won't let you forget your shortcomings in a hurry!

Happy New Year to you all.

I'm very glad to read this today. It's equally 'damp' here, and no cat would like it.
I do think cats are on this earth to keep we humans in our place, don't you?

Oh my, I do know the feeling. No one can let you know you have not quite come up to standards, like a cat. Hope you are out of trouble soon.
Kat