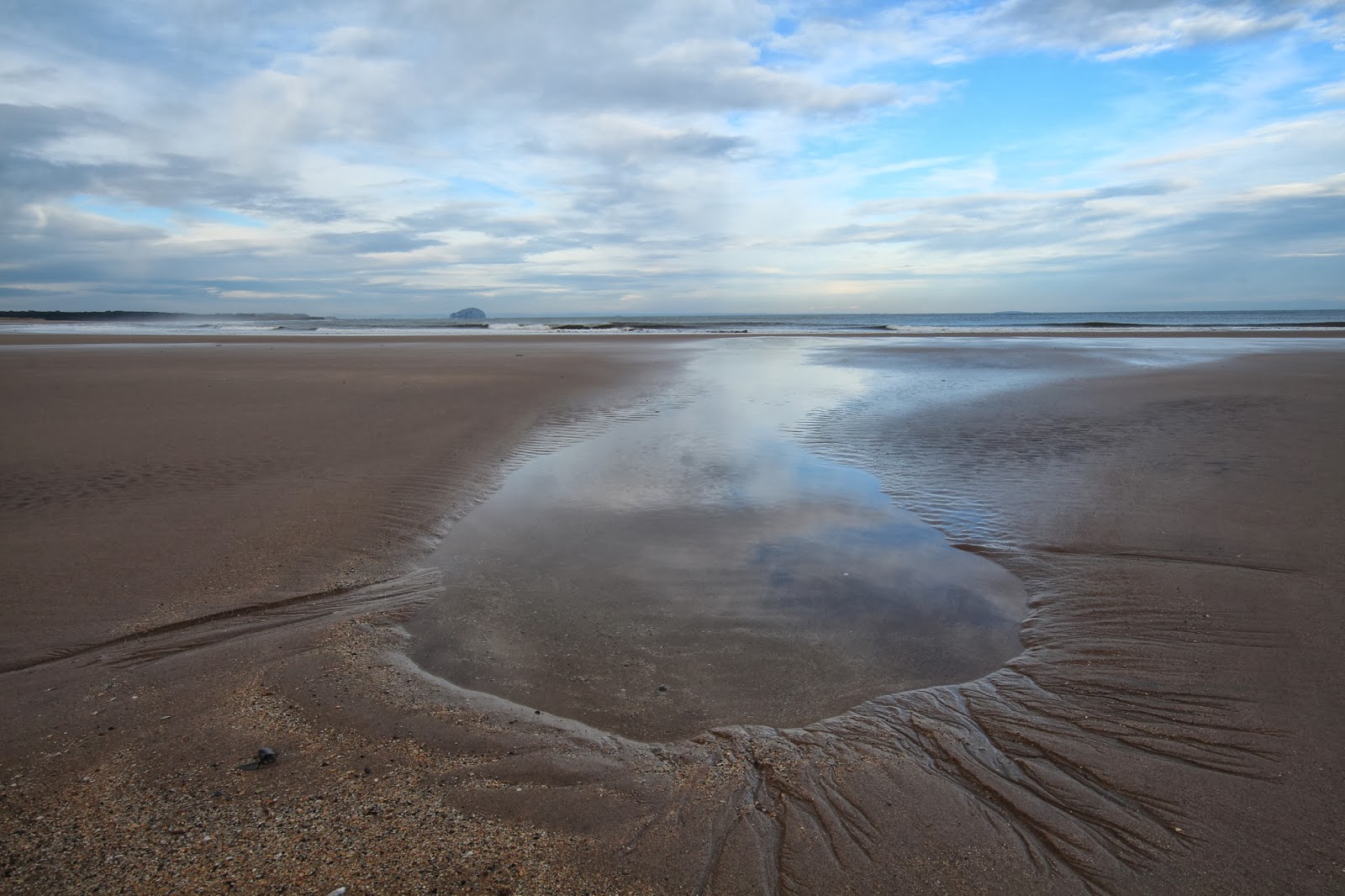 I close the car door, lift the small camera pack to my shoulder and turn to face the sea. The wind off the water is blowy and cold and makes me glad I've several layers on beneath a good anorak and that I took a moment to stick an old woollen hat on my head. It's one that I bought for my late father years ago when he complained of feeling the cold because his hair had thinned so much. I have it in the car all the time so it's there when needed, like on a cold day when I decide on a whim that I'm going to go and take a few photos. A mix of sentimentality, familiarity and rare forward planning perhaps.

I step over the low wooden barrier rail of the car-park, stopping a moment with a raised foot on the bare tree trunk to check the laces of a boot before stepping onto the rough grass between me and the water. The grass is knee high and bleached blonde, perhaps from the long gone sun of last summer, perhaps scoured of green by sand and wind or just possibly because it's gone into that hibernative state that sensible things do in nature when it's Winter. Less than a minute later I'm down on the sandy edge of the stream that negotiates its way across the last few hundred yards to the sea. There are always seabirds here, swans too most of the time,  where the water's richly blended with salt and fresh water and benefits no doubt from the small lives that follow the ebb and flow of that twice-a-day battle of the tides. A never ending buffet with a wider than normal menu.

I walk the low bank and scan the water lip with a child's curiosity, something I've never lost when it comes to places like this, looking for shells, plants or any old bits and bobs of interest that could make a nice photo. Places like this have always made me feel consciously alive and I wonder now if that's one of the reasons I've never lived far from the sea. The man that was the boy now collects photos where once he would have innocently stuffed pockets full of things to unwittingly frustrate a house-proud Mum when excitedly pulled out along with all the sand and rubbish that had gone in with them.

Today a group of birds are huddled together ten or so yards away, shielded from gusts of wind by a low bank that marks the shelter it gives by threads of sand blowing now and then over their heads' Small gulls and waders dart now and then to the water for a paddle and a downward poke with their bills. My arrival disturbs them, a few warily getting up onto their feet and shaking feathers, others content to just watch across the width of the stream as I gently take the bag from my back and remove the tripod and then the camera itself. 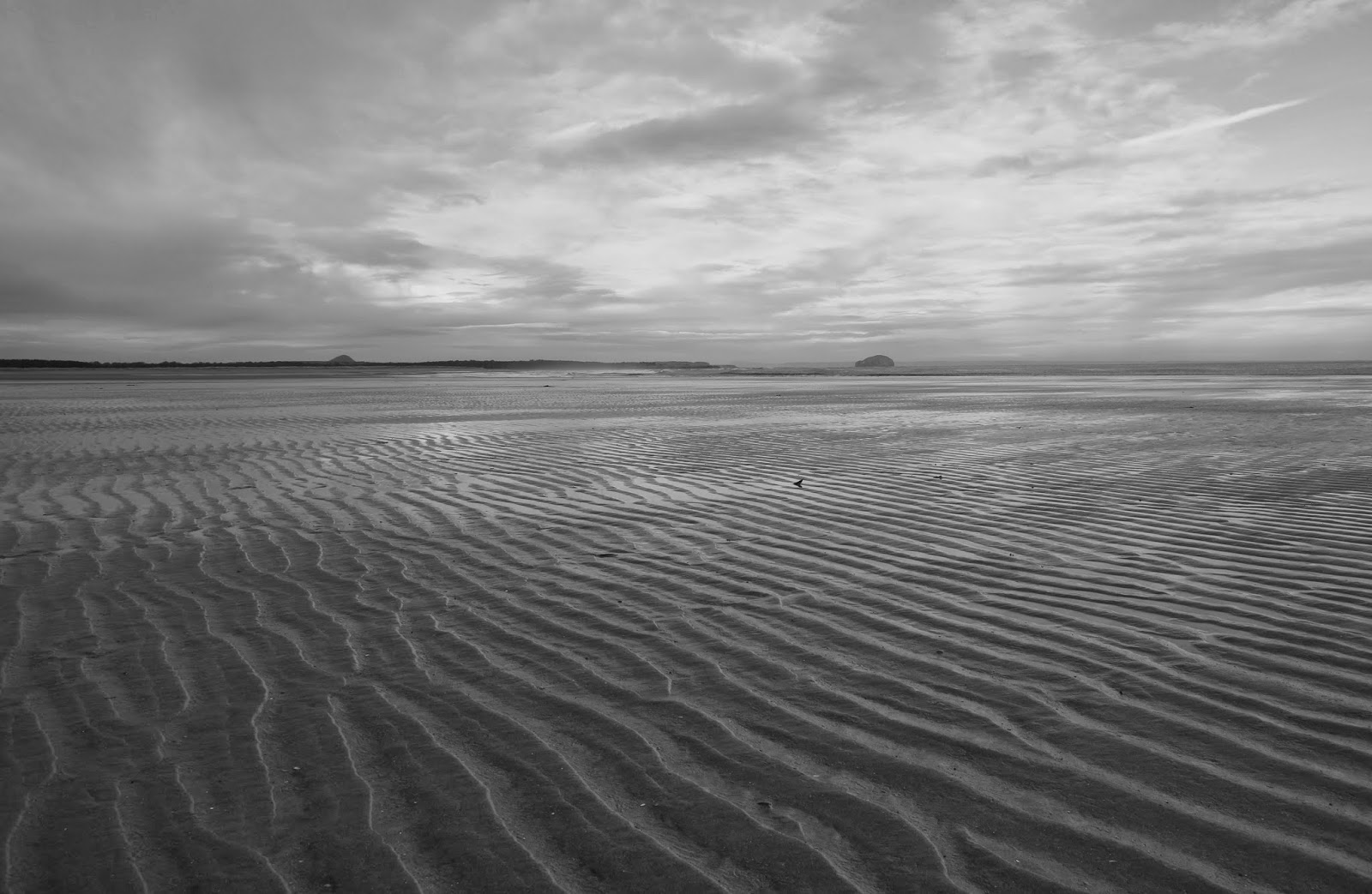 By the time I've attached the camera to the tripod and set up a shot the birds have become camera shy and moved further away. Not feeling me much of a threat to safety they walk with their backs turned huffily to me rather than exert themselves by actually flying. I change the lens to a wide angle one better suited to landscape work, carefully avoiding wind blown dust and the like getting to the camera's mirror or sensor inside and set up another shot. When I look at the result it's disappointing, the colours flat and the contours of the river that tweaked my interest not as clear or prominent as they are to my eye. I adjust and retake the shot again a few times but am never satisfied with the result. Maybe they'll look better on the big screen of the laptop when I get home though so I keep them and move on.

The tide is out and my favourite bridge is stranded on the beach. It looks abandoned and pointless when the tide is out. It's span ridiculously high for the trickle of fresh water that runs beneath it yet I've seen water touch the underside of the highest point when there's a high tide. It doesn't look so ridiculous then. I walk towards it with my camera still attached to the tripod, both crooked in the bend of my arm, considering how I can take a different photo of something so 'weel kent'. By the time I get there I've decided to leave that for another day and walk over it and out onto the beach beyond. The waves are a couple of hundred yards away still but I easily hear the continuous roar of them coming home. 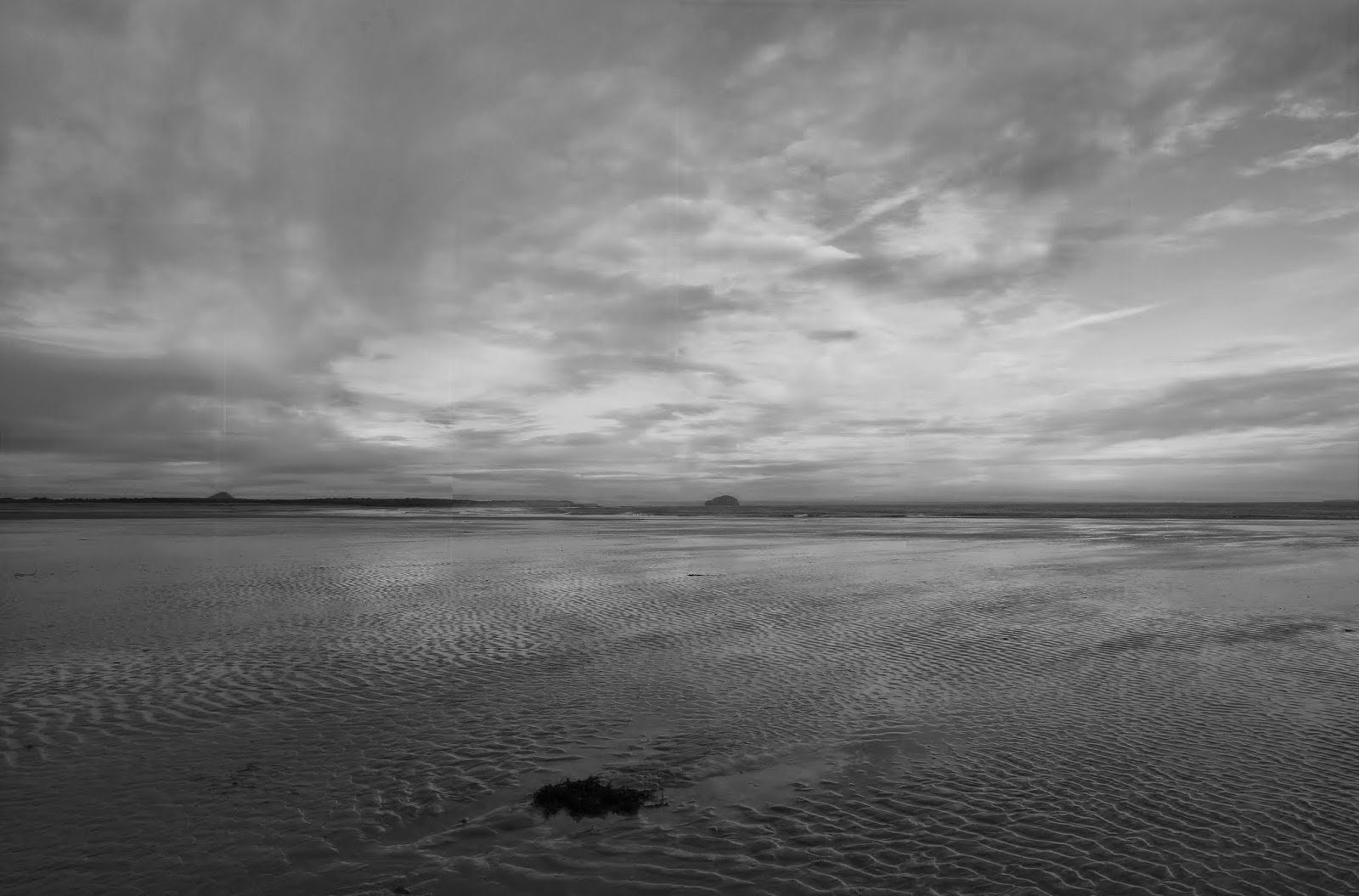 The wind strengthens and whirls of sand twist around my feet as I walk, looking for a photo. The sky is interesting but somehow the light is flat. It's an odd combination so I think some black and white shots could pull detail out. I find a spot with some foreground interest where wave patterns etched in the sand lead across the view  are picked out by the light. I set the tripod down and adjust its levels until the horizon seems good which is something I often struggle with. { I must stand squint} I start to shoot; exposures to catch detail; exposures set longer to blur some of the waters movements and pull out reflections on the sand. I feel the camera's too high and needs to be lower to bring out the foreground but the swirling sand is too much of a threat to something so expensive.. I wish I'd brought some protection. I normally carry a couple of carrier bags which can be used for a makeshift cover against rain or windblown debris but I'm starting to curse myself for not thinking what it would be like out here. As I do this I keep shooting and see that somehow the horizon has skewed far off being level. Another frustrated sigh escapes as I realise that the tripod is sinking in wet sand and - again - I haven't brought my usual fix; a few cardboard coasters to stick under the tripod feet. They do the job, are easy to carry and can be chucked after use if need be, which is probably what I've done with the ones I've been searching for in my bag. I move on.

A while later I've moved several times as the same thing keeps happening. I'm getting increasingly dispirited about getting the photos I'm trying for but am consoled just by being out here. Despite that, cold has crept in between my shoulders and my thighs feel icy from being hit by spray and wind. My fingers are aching {No, I haven't brought my fingerless gloves either. What did I say about forward planning earlier?} I decide to call it a day and start to dismantle my gear. I'll pack the tripod onto the back pack but keep the camera out in case I find something on the way back.. I start the walk back to he bridge and the car. 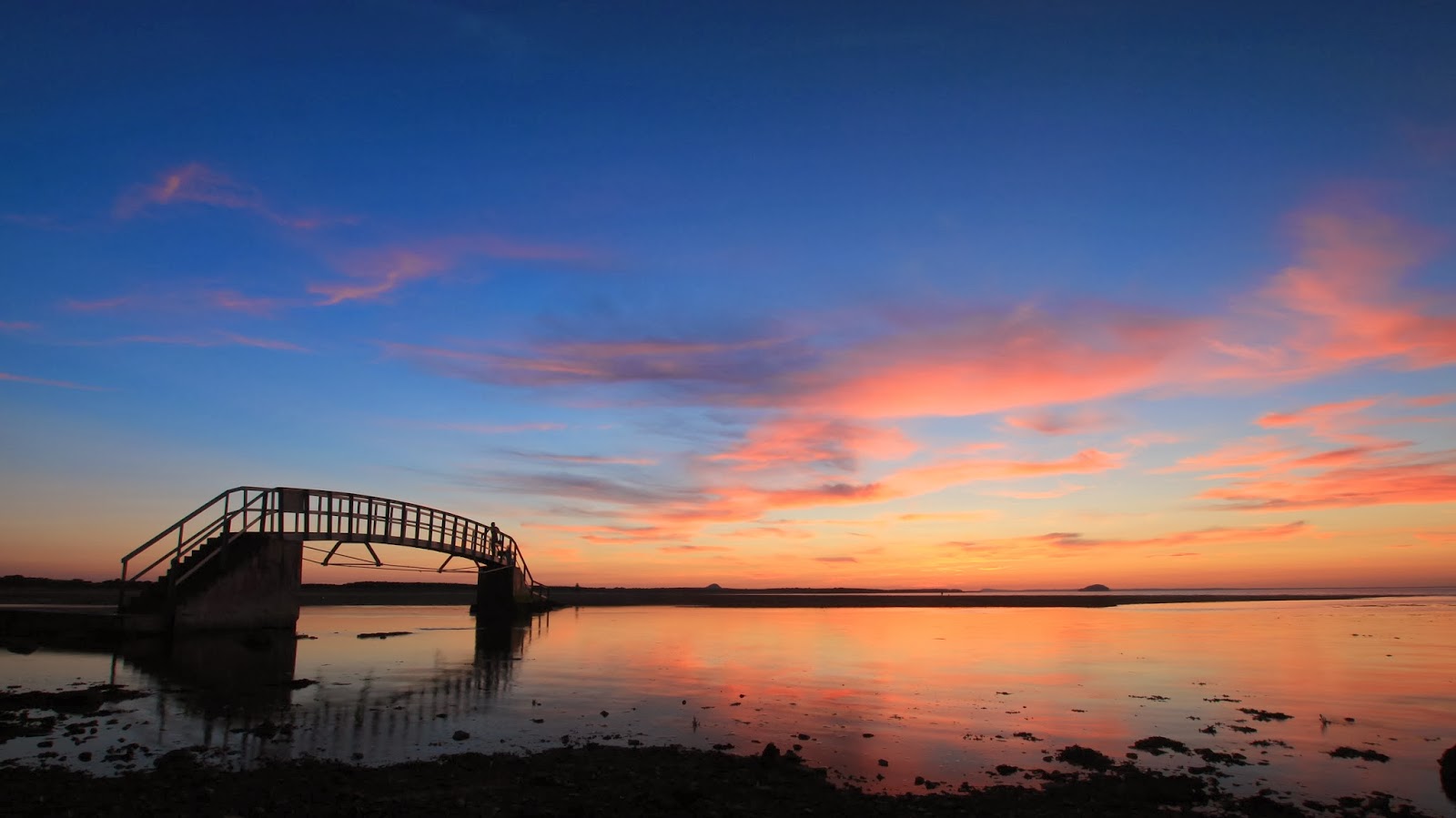 Thoughts crowd in leaving any frustration behind me on the sand. I think of days and nights spent here in the past and head home reminding myself of the summer to come although it feels far off. I look forward to home and a hot drink. 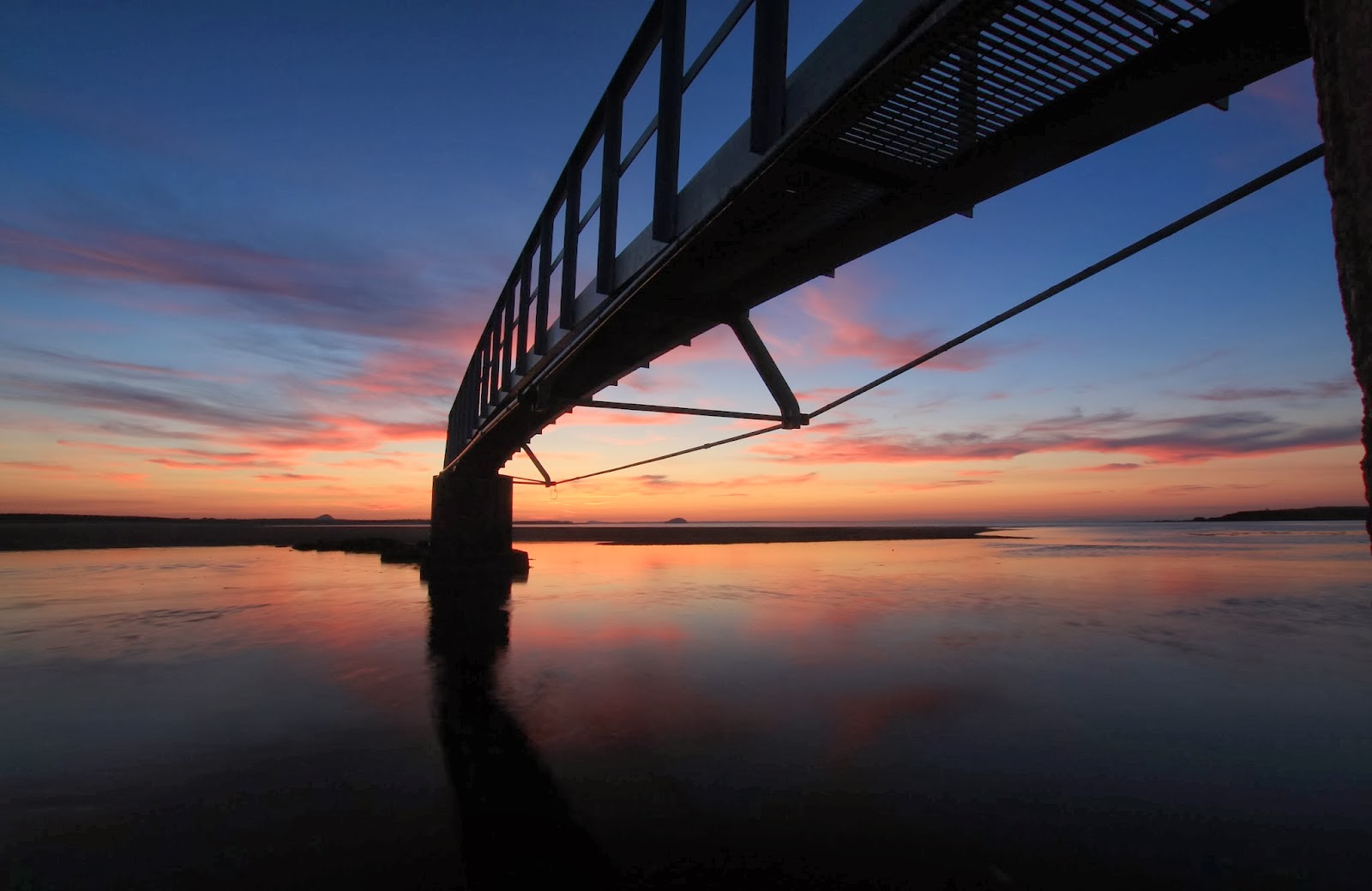 Hari OM
Marvellous post Alistair; the kin-hood of photographers pulls me here. A few days in Dunoon with that raw-water-cold and the dread "battery dead" had me tutting too - but oh the inner lift of simply being in such places... wonderful to see you out and about! YAM xx

Ah the old dead battery trauma eh? I now carry 3 batteries most of the time. {overkill I know} Doesn't help me battle cold fingers though. I'll be over to have a look at your Dunoon shots in a wee while.

It takes a hardy soul to brave the weather sometimes in hope of a good photo. I see you have more patience with the workings of a camera than do I--having recently given a nearly new and rather sophisticated one to my SIL rather than persevere with the learning curve.
I smiled at the bit re your Dad's hat--I kept a thick hooded pullover I had given my late father. I wear it only a few times per year--it swallows me.
Lovely descriptive phrases--as I expect from you.

I'm at the stage where I'm not so worried about the workings of the camera any more. Not that I fully understand or use them all but I know I can experiment knowing that 'delete' costs nothing in the digital age.
The familiarity of things like the hat is comforting and worming for itself and the associations. It's nice feeling a bit of him's out there with me. He would have liked that.
I'd like to get back into blogging a bit more again. Hope it happens.