Why I will vote Yes with a passion 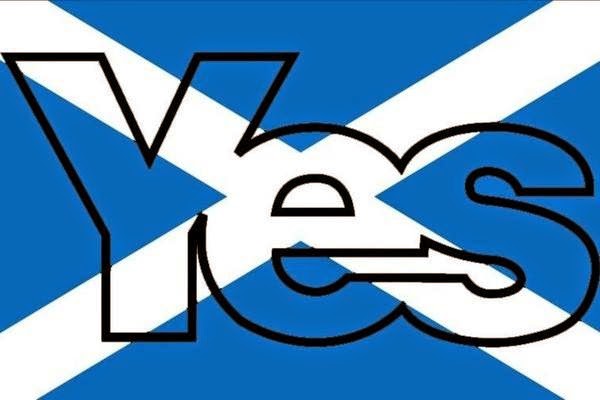 This is in part effectively a response to a newspaper article by an English journalist based in London called 'Why I'd Vote NO With A Passion'. You can read it here.

I would rather be a good neighbour, reaching out a hand in friendship as an equal to a true friend than a surly lodger who feels ignored, neglected and constrained, forced to conform to the choices of a rapacious and absent aristocratic landlord.

I am fervently for inclusion, multiculturalism and multi-nationalism but our political system increasingly denies and demeans the reality of those things. Lip service to these values, to social justice, economic equality and to a progressive, inclusive society isn't enough. It's not good enough for me and it's not good enough for those generations to come. You deny my culture and nationality when you deny me the political, social and economic means to express it and to fulfil the dreams it carries. Now you make a minor gesture of more power but retain control and in a conceited lack of understanding expect me to conform to your limited concept of who I am and be grateful, docile and amenable while I do so. How dare you equate my nationalism with the extremes of the 20th century. You shame yourself in promulgating such absolute deceit. 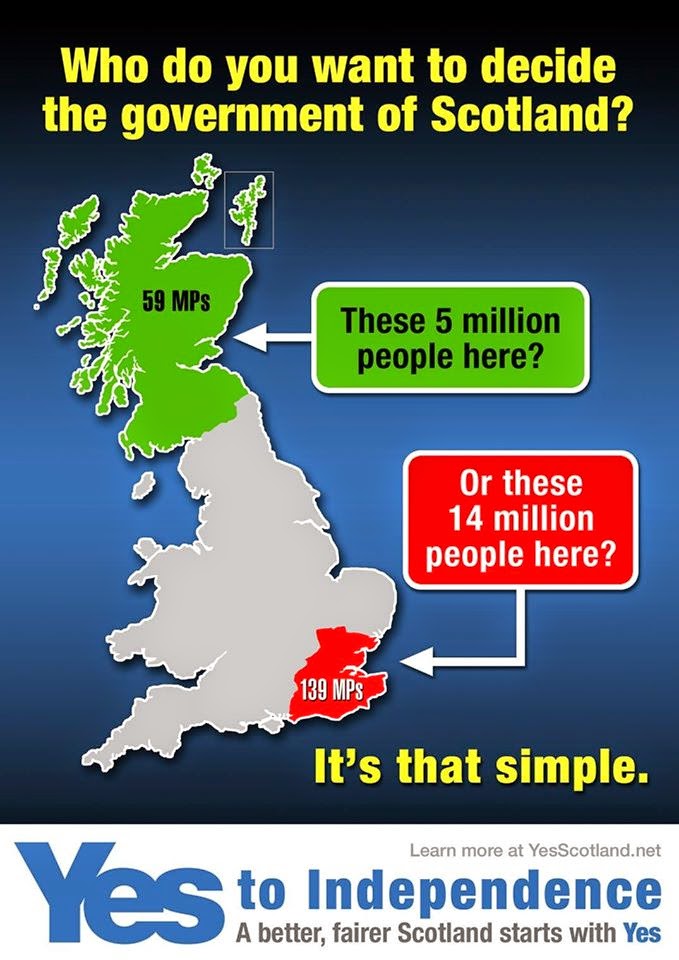 You acknowledge we're different but don't understand why. That's why you cannot grasp why we recoil from a political system insistent on treating us like a fiefdom. If you lived here, far from London-centric economics,  with its political establishment and inherently superior 'Westminster village' mentality you might feel different too. Few journalists or politicians really understand what this feels like. Those who do speak out find a London dominated media and political system that struggles to hear anything not spoken in a London accent or in big business interest. We feel demeaned and sneered at for being welfare junkies, benefit dependants who spend more - £1200 more per person per annum - on our public services than the UK average while you are ignorant of the reason for this in delivering even limited services across Scotland's scattered communities.

Because of this we are 'taking more than our fair share' and face increasing demands that spend is cut to the UK average. You do not recognise that we pay heavily for this, contributing £1700 per person per annum more in tax than you do and therefore it is we who subsidise you.. Perhaps the more affluent South should contribute the same amount as we do to our union in this unequal society instead. While thousands live in poverty and depend on food banks, in our grotesquely unequal society our taxes  - that should be working for us - subsidise highland estates to encourage the worlds rich to come and shoot birds and maintain their workers on poverty pay. 60% of all private land in Scotland is owned by less than 1000 landowners. Our millionaire Prime Minister likes to come and shoot things on his mother-in-laws 90,000 acres of the island of Jura.

Meanwhile you, the decision making political class - actually 'elite' is truly the right description -cannot represent an electorate you don't hear or understand as you tread the path of self perpetuation and blatant self interest. Only now, faced with a threat and reality brought on by complacency, conceit and neglect do you actually begin to do what you should be doing every day.  But you're not working your socks off for anything else other than the status quo.  You professional politicians, too often the privileged and privately educated sons of inherited wealth, display a staggering belief in your entitlement to dictate our lives, set us in thrall to the power, influence and demands of global corporations and show a complete disconnect from the reality of everyday life of the vast majority. You make promises and arguments couched in deliberately complex, convoluted language so they can be denied, qualified, redacted and reduced when convenient or challenged. No matter how we vote we are outnumbered ten to one in this fair land and our voices are heard only in a rare chime with English partners. You treat our demands for financial and social independence like the petulant whine of a misguided adolescent, reject and deny legitimate claims with impunity and threaten to withhold our pocket money while you already prescribe how much of our own money we get and what it can be spent on 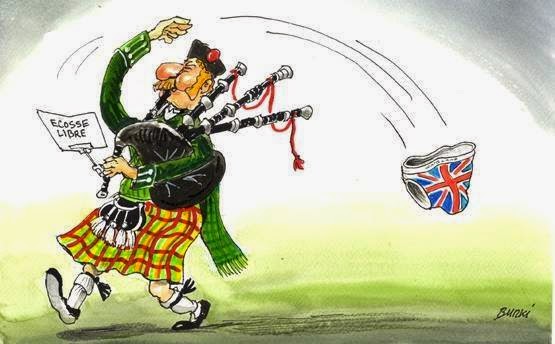 You are still that same establishment who, when oil was found in the 1970s,  buried a report for ministers by the senior civil servant Gavin McCrone that predicted an independent Scotland would be richer than Switzerland because you were afraid that an informed, burgeoning Scottish nationalism would split the union and result in a wealthy independent neighbour. You just couldn't have that could you? That was kept secret for 30 years and allowed you to needlessly squander £300 billion in oil revenues without setting up an oil fund to benefit UK society. There are only two oil producing countries that have never set up an oil fund. The other one is Iran. How's that for a comforting comparison?

Scotland is the only country to have produced oil and got poorer. The UK has nothing to show for it and you have the audacity to tell us we couldn't possibly do a better job on our own.. Now we're told the oil will soon be gone and estimates of  remaining value are vastly exaggerated. Our economy will collapse our pensioners will starve. Exactly the same fear mongering you worked to prevent the establishment of limited devolution in 1979. Shame on you for trying that again. Shame on us if we believe you have only our best interests at heart when billions of pounds of investment are being poured into existing oil fields and new ones are about to be opened up.

Now we have the bribe of more powers but, even this last minute offer of as yet undecided amounts of limited power reluctantly given - once it's been diluted, nipped and tucked by Messrs Cameron, Clegg and Miliband in the comfortable afterglow of a 'NO' vote - will be ripped to shreds to get it through a parliament stuffed with English MP's. It won't be fit for purpose for real change and the wish to be responsible for ourselves. It is beyond meaningless and beyond too late. You smile and tell us to be reasonable, you need us, we're better together, you care, ask us to think about our shared history, our heritage. You cajole us and tell us we're too small, too weak, too poor and too dependent on you to go it alone. You threaten us, scaremonger the elderly about our pensions, our economy, our health service and encourage your friends in big business to roll up and tell us in droves they will leave, will hike prices, reduce jobs, cancel investments, that oil and gas will run out. You say the world is safer if we are strong together while you park your nukes next to our largest city.

You don't deserve us any more.

Devolution has made significant positive changes, for example the emphasis on early years provision, early intervention and prevention which the Scottish Government has driven and invested in, the protection of free higher education, free personal care for the elderly and free prescription medicines for all. These all have the potential to make major differences to many lives, immediately and into the future but only barely scratch the surface of our hopes and ambitions. These are the things I value. With limited devolution whoever ultimately holds the purse strings wields the highest power. When it comes to making decisions that affect Scotland, that control should be by the people of Scotland. I believe independence, with complete control over our budget –  both income and expenditure, how we raise it and how we spend it – is the only way we will ever be sure that our priorities are our focus for
action.

This is about a positive vote for our future and is not about voting for any particular political party – that comes later. None of us will get everything we want – but we will certainly be better able to influence a positive future, relevant to Scotland’s specific aspirations and priorities when we decide what we can do rather than being told what we can’t.

In an independent Scotland we can together identify the fundamental principles that will address what we care about and believe in - our aspirations for our country. I believe the way to assure a positive future for Scotland is to be a country that values, nurtures and protects all of its people and its future generations, something they have a right to expect from us. I am not naïve enough to think it will all be plain sailing but how we resolve difficulties will be our decision and for me that is important enough to live with the challenges along the way. We can take a few years of hardship to have control of our destiny. I doubt we will have the kind of hardship you describe though.

There will be no borders, no lack of regard or respect for shared history and heritage from this side at least. But it will be as equals. I believe you will always find Scotland to be your firmest friend and staunchest ally. I will always have friends and relatives living in England. It will never be a foreign country to me. Part of me will always be British but win or lose this referendum I will never choose to be governed from outside my country.

That is why I will vote YES with a passion on Thursday. 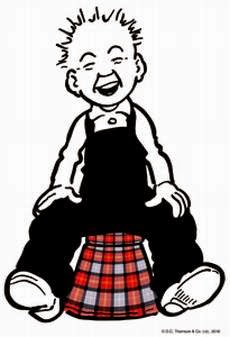 Well said alistair ... I am proud to be Scottish and never more so than now

Hari OM
Bravo Alastair... I just pray that enough of our residents understand that the referendum IS about saying whether or not they will be willing to participate in building a new and worthwhile nation; not about party politics, which as you say will come later. Having the benefit of also being a proud Aussie in addition, I can tell you that being a country standing on its own two feet is not without hazards...but it carries much reward.

What will be will be, (to coin a phrase &*>), and either way, Scots have woken up to greater participation and the making of difference. Long may it be so. YAM xx

Thanks guys. Sometimes I need to vent.