A lovely day and a visitor 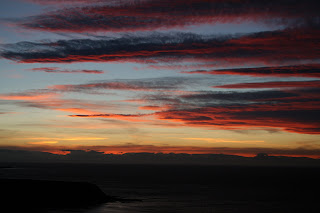 Its been a cracker of a day today weather wise and one of the lovely G's friends has come to stay over. G and I always enjoy visitors and its nice to catch up with folk again. Miss C arrived at about 10.30am and after a quick catch up cup of tea I took her and G off to drop them so they could walk along the headland to Fast Castle, a nice walk of about half an hour downhill to the fragmentary remains of what must have been an amazing sight. The site of the castle, jutting out into the sea atop some rugged cliffs covered in sea birds is absolutely stunning. And of course it comes with its own legends of fantastic treasure just waiting to be found. Not that I'd want to lug it back up that hill mind you as its a bit steep in parts.
After a couple of hours I picked them back up {although I was late - what can I say, I'm a bloke!} and we all went to a local hideaway restaurant for a { on their part} well deserved lunch and a nice bottle of red wine. The weather was glorious and we ate outside, a leisurely affair of a couple of hours before coming back to the house, a seat on the patio and our special sunny day treat of Asti with lime - a couple of limes squeezed into a jug of Asti spumanti - which turns a bit of a howler of a wine into something quite spectacular. Give it a go you will be amazed. { thanks for the tip Nigella!!}
While they chatted I went to a local supermarket to pick up some stuff for dinner in the evening and lunch tomorrow, forgot my wallet, had to leave the shopping in store and come back home for afore mentioned cash holder, dash back and pay - typical. I had managed to find some nice cheeses and biscuits for a late supper and I got everything I wanted to make some thai fishcakes which we will have for lunch at some time before C has to leave to go back to Harrogate on Mon.
As it should be with friends, wine and banter flowed freely, music played in the background and a great deal of lifes problems were put to rights in a happy, reflective way. Even with a short trip out to the headland again as I thought the light looked great and wanted to take a couple of sunset shots, soon we realised that midnight was on us and the ladies decided that it was a good time to head off to bed before I turned back into a frog or something. I stayed up for another hour or so going through the photos I had taken today and others that I had put onto the laptop, organising and editing and generally tidying stuff up into folders etc before eventually calling it day and heading off to bed too.
Looking forward to what today will bring.
see you later.............

Email ThisBlogThis!Share to TwitterShare to FacebookShare to Pinterest
Labels: the lovely G, visitors