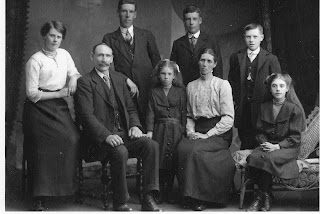 I have been uploading some photos using the new scanner that my Lovely G got for her Christmas. I've been unwell through Christmas and the New Year and only now feel like I may be shaking off the chest infection that has laid me low and denied me any inspiration or inclination to post anything. The first few photos that I uploaded were just a bundle lying in the library, a few old family snaps that I'd had returned from a relative who had asked to borrow them to make duplicates.

Me being me I spent some time looking at the images I'd scanned into the laptop thinking about the people known and unknown who look back at me. Relatives and ancestors who lived and died long ago, I was caught I think looking for signs of familiar features passed down through the generations. A weel kent nose or hairline or a familiar glance. The first photo was of my Great Grandpa Robertson and family taken in late 1914 or early 1915. This formal portrait shows them together before the family split up as my Grandpa Sam Robertson left to go to war. He has just turned 19 as he stands there by his father, leaning informally towards him with his arm resting on his Dads chair, long fingers like a pianist trailing down. He's tall and healthy, used to the outdoors, son of an estate gamekeeper, working as a postman and used to tramping the countryside. He has my fathers hairline and ears and that way of looking right at you with a straight lipped mouth that I remember so well. His father, also called Sam, has that proud stern Victorian look. Huge calloused hands rest on his thighs and he looks straight at the camera. He is a devout Christian and he looks to me like he has the kind of conviction that comes from regular staunch and extended supplication. I'm reminded of stories from a father and Uncle of Sundays with their Grandparents spent in silent reading of bibles, long walks where a young boys distracted whistling would be met by a clip on the ear and a reminder that 'it was Gods day and not for wheepling'. Does his look in this photograph say that he hopes it will be over before too long or simply that he believes that when God is on your side that all will be well.

My Grandpa's brothers are at his side; James is 15 or 16, tall and lean like his older brother with similar features and steady gaze. Davy, who I remember as Uncle Davy is 14 and already working down the local pit. Like their father, they are all wearing fob watches on their Sunday best suits. Oddly it's Uncle Davy who is most familiar. That photograph, that look, is uncannily me at the same age with a few adjustments for updated clothes and hair, but the look is me and also my nephew Adam at the same age. Adam and I were so similar in our development - even thirty years apart - that most of the Robertson clan used our names interchangeably which was confusing for both of us for many years. Even today my older brother will often call Adam or I by the others name.  Back in the photo, the girls and their mother are also in Sunday best, the youngest in hand-made smock dresses. Margaret, the oldest, sits close beside by her father and like her older brother, has an arm on her fathers chair. She has a caring face and seems to be ready to support her Dad if needed. Her hands show signs of manual work. As the two youngest look directly at the camera one seems inquisitive perhaps, shy but pleased to be seen in her Sunday best, while the other seems to resent this strange contraption in front of her and its unblinking contemplation.

It is my Great Grandmother who is the most telling for me however. Of all of them she is not looking at the camera and has been caught with what seems an incredibly sad and poignant look on her face. Perhaps she knows too well that this may be the last time they are together, the reality of lists being printed in local newspapers of dead and injured on far away fields where mothers cannot reach foremost in her mind. 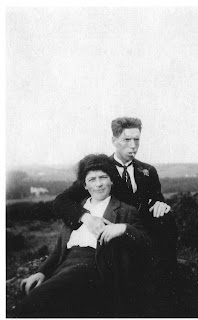 This photo was taken when Gran and Grandad were married in early 1920. It's a very different man that kneels behind his new wife. He no longer looks at the camera and holds her -she was named Helen but always called Nell - by a protective arm passed across her chest where her fingers clasp his. He has the remains of a cigarette in his mouth and eyes that are hooded and shielded. His hair is newly cut but still still wild and unruly. He looks fierce and untrusting, ready to butt heads. I looked at this photo at length trying to fathom his expression. There has been a huge change in the few years between the two photos. I have posted before about his wartime experiences here. Granny Robertson was a twin and would go on to have twins of her own, the middle set of four children being two boys, Sam and Bill born in 1925. 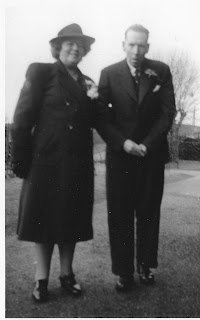 By the time the final photo here was taken Grandpa Robertson had been all but crippled bythe ongoing effect of what was then called 'shell shock' but now is called 'post traumatic stress disorder'.

I love looking at old family photographs too and projecting my impressions. Your appreciation of personal history, and otherwise, shows real respect. That must be another Robertson trait.

Hi DBS - Jings that was a quick response. I'd only posted a couple of minutes ago.....

Thanks. Family is the keystone for me I guess. Lots of my posts reflect this in various ways.

Another great post! So sorry you were not feeling well and so very glad you are doing better. Family is a key for me too and the scanner is one of my favorite gifts. I have a contraption my Sweet Hubby got me a few years ago that scans slides into the computer. I love those old photos.
Kat

Lovely thoughtful post, Al. The photos indeed show your grandfather's pre-war optomism and comfort, and the post war wedding photo does show a drastic change. I know this story was repeated for families all over the world and is rather painful to think about. Did your uncle Dave live a long life after starting so young in the mines?

Hullo girls - The scanner is a nifty wee bit of kit. Should be useful - G's father was a very keen photographer and we have thousands of his photos we can now scan and share with family.

Uncle Davy lived a long life, although he was ill for many years in his old age. He died aged almost 80 or so I think in the late 70's or very early 80's.

I enjoyed this when you posted it but didn't have time to stay and comment.
I just went through again, taking time to enlarge the photos.
I do the same thing with vintage photos--contemplating the faces and perhaps merely imagining the resemblances I want to see. I'm always amazed at how photos of any person at different points in their life bring particular features and expressions to the fore, which may not be notable at other times.
Its good that some of us are interested enough to replicate and share old pictures and memorabilia--its a fascinating pursuit. The tools now available are fun to work with.

I'd love to go back and talk to some of my forebears, especially people I only knew as a child when they were old. It's something I've always been fascinated by I suppose. That wish creeps up again and again in the blog, represented in various ways like this post.

Hope you and J have had a great day for his birthday.