Now What can I say? 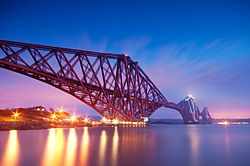 In Scotland, if not the whole of the UK, there's a well known saying when a job seems to be taking a long time to complete that it's "like painting the Forth Rail Bridge" because this's literally a never ending job. No sooner had the poor blighters painted themselves from one side 1.5 miles across to the other than they had to catch the next train back and start the whole bloomin' thing all over again.

Now, some bright spark has invented a long life paint resistant to sun and sea that will last twenty five years between coats. This week, the poor guys who have been painting this fine edifice since 1890 completed the mammoth task for the last time and celebrated by doing themselves out of a job.

Email ThisBlogThis!Share to TwitterShare to FacebookShare to Pinterest
Labels: language

"I think it would look better in blue
Eck (the boss)"

Now what will they do? Sounds a bit like painting my old place.
I want some of that paint.
Kat

Sandy - We've cleverly painted it rust coloured so no-one can tell it's a load of .... well......rust actually.

And Maximum Eck can go whistle!

Kat - you wouldn't if you saw the colour. That's why it's photographed only at night. It's the law!

That may be too philosophical for a Saturday night dbs.........

Hehe, I want some of that paint too! Beautiful photo. I have a special place in my heart for the Forth Rail Bridge. Love seeing it lit up.

We used to live nearby [in Dalgety Bay] and saw it almost every night when out for a walk as there were some nice views of it from the edge of the village.