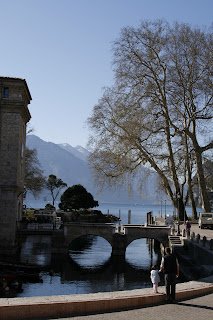 You can recognise the occasional local that we meet walking along the side of Lake Garda between Riva Del Garda and the next village, which is called Torbole, by the slightly condescending looks they give us pasty skinned Scots dressed in light trousers and T-shirts. While we're enjoying temperatures equivalent to our summer, they clearly believe it's still winter. Invariably, they're wearing multiple layers of much heavier clothing, often a hat and almost always in dark colours. Of course there are a few tourists who are also from much warmer climes and feeling temperatures in the mid-20° C to be just a tad chilly for exposing any skin. Granted it can be "fresh" early in the morning or in the evening but now, at midday, it's blooming hot and I'm beginning to think that perhaps an excursion to the nearest shady watering hole might be a good idea. While continuing to think liquid thoughts I take some comfort that the looks given to us in passing are nowhere near as disparaging as those given to anyone sunbathing on the shoreline and as for those actually swimming………. 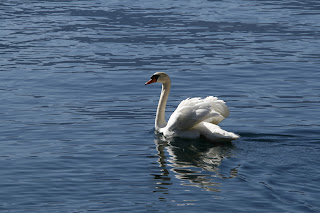 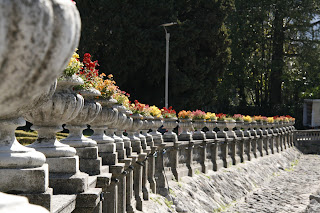 Unfortunately for my burning forehead and pretty weak justification for alcohol, the purpose-built walkway and bicycle path follows close to the water's edge and there doesn't seem to be any watering holes in sight, shady or otherwise - perhaps a sign that Italians take their walking and cycling more seriously than I do or, that their planners take a more enlightened view towards the environment than most tourist destinations where water and heightened temperatures are the norm. I stop to take some photographs and consider my options. After a few frames and a moments musing I turn to The Lovely G and suggest, with a slightly concerned tone that perhaps she may need to protect her delicate skin. Another sentence with the word ‘ice-cream’ casually inserted and a few moments later I am unashamedly being led back in the direction of our favourite watering hole, silently holding an internal debate between the inherent attributes of soave or pinot-grigio as potential rehydrants. 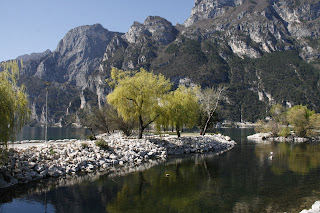 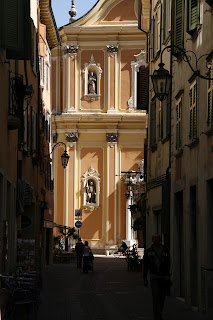 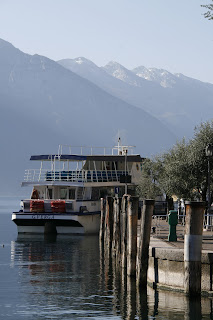 An hour later having successfully protected The Lovely G's skin and been rewarded with lunch and a glass (or two) of nicely chilled Soave wine for being so considerate, we decide to take a boat trip from the other side of the harbour out on the lake. We don't have a firm destination in mind, just the idea of a pleasant boat trip in the afternoon sun. There are regular boats heading out of the town criss-crossing the lake to towns and villages up the next 20 or so miles on each side of this absolutely enormous body of water and the tickets are cheap so for the next few hours we enjoy the gentle breeze generated by the boats movement and the luxury of being transported from one scenic town to the next and the next and the next until we eventually disembark at a small town called Limone which looks interesting from the boat. We find a cafe, drink delicious coffee and relax and explore before picking up the return boat a couple of hours or so later having made plans to take a boat trip another day to another of the picturesque small towns we feel demands further exploration. 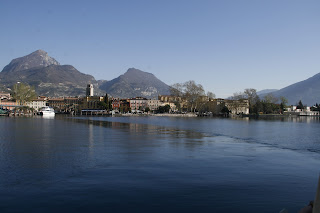 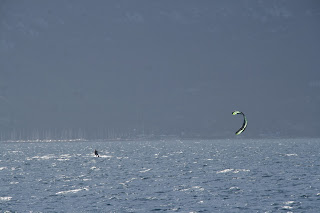 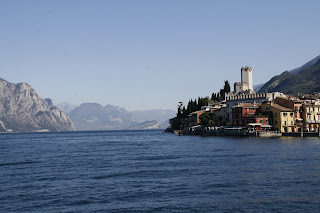 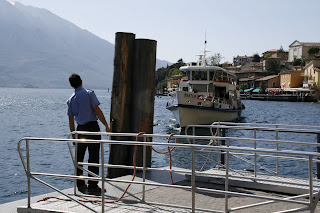 Back in Riva we potter around the medieval piazza among the shops and cafes at the foot of the watch tower before making our way back to our hotel tucked away in one of the medieval streets a few hundred yards up the hill from the harbour. 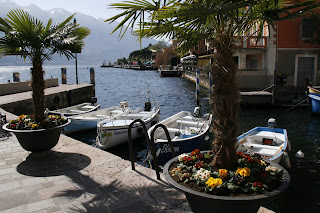 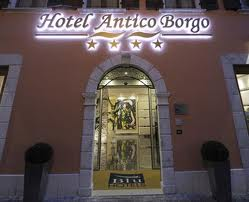 There's just time for a drink before dinner and the girl behind the bar shows a remarkable lack of talent when trying to pour an accurate measure. A G+T should hit the mark.

It all sounds bloody idyllic, and I am mucho jealiouso (See, I speak Foreign).
Lovely pics as usual, not even seemingly effected by the vino. Well done.

BTW, Even I would shudder at drinking off ½ litre of Gin.

I am in awe of your linguistic expertise TSB - something taught in the armed forces no doubt - or more likely because you married someone from foreign climes.


BTW that was with SOME tonic in it. I'm not that bad! {At least while under supervision anyway}

I always thought Ferguzade was the best tonic.

Oh how lovely. I would give my eye teeth for a holiday there. Loved the photo of Nessie on holiday too . . .

My sense of geography isn't great, nor my concept of distances--I'm fascinated by the fact that continental Europe is so accessible from the UK.

Glad you liked them BB.

Two and a half hours flight from Edinburgh to Verona then a two and a half hour drive to Riva by bus is all that it took MM. Not so far really compared to the distances you have in the US just within the country. That's the hard thing for us over here to grasp.

By the looks of things, I too would feel the heat of that place, dispite the winter attire of the locals. Your photos are simply lovely...goodness, what a beautiful spot. Thanks for the envy-invoking pictorial tour. I also like the way you travel - plenty of refreshments is exactly my style, too. Cheers!

I live in constant fear of dehydration Rebecca - or 'that's my story and I'm sticking to it!'