Those magnificent men in their flying machines 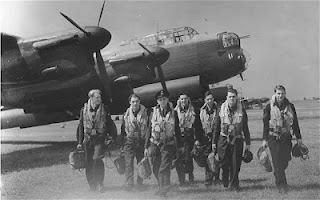 This week saw the unveiling of the memorial to RAF Bomber Command take place in London.

During WWII men from all parts of Britain, from allied and occupied nations and from around the world volunteered to become aircrew in RAF Bomber Command and took part in the most consistently dangerous operations against the Nazi regime. Of the 125,000 who served almost 60%, over 73,500 men, would be killed or wounded, a figure that in percentage terms far surpassed the losses of men in the trenches of WWI and the highest losses sustained by any armed forces in WWII. The dangerous nature of their missions meant the aircraft they flew had an average lifespan of just four weeks and six missions while operational aircrew, who's average age was twenty two, were expected to complete a minimum of thirty operations to earn a temporary posting to less dangerous activities - a posting that many chose to forego to keep fighting.

For a large part of the war, losses of 5% per mission were so high that for front line crews life expectancy was in effect just three weeks. 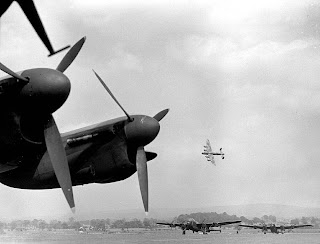 After the war, when the real effect of the bombing campaign could be seen, many were appalled, especially as a terrible destruction of the German city of Dresden had occurred just weeks before the end of fighting. Politicians who had been at the front in ordering wartime action and the taking of war to the enemy in this way quickly backpedalled and ducked responsibility in moves of neck-saving political expediency, while a war weary public were only too keen to forget in their need to move on and build a better future. No mention of these Bomber Boys or their sacrifice was made by our famous wartime PM Winston Churchill in his victory address to the nation. No medal was given -then or since - the only branch of the Armed Services to be treated in this way. Over generations, while the brave men of fighter command were rightly seen as heroes, the Bomber Boys were ignored, their actions vilified and their courage and sacrifice unrecognised by the British public. A few complained and campaigned for recognition of the sacrifice, but most lived quietly, carrying the scars and weight of memory with the same kind of dignity and fortitude they'd demonstrated as young men. Over time, to our national shame, their story was forgotten, buried for political expediency under the myth of those famous 'few' RAF heroes fighting the Battle of Britain. For more than 50 years their story has largely gone unrecognised except for one heroic raid by a squadron who became known as 'The Dambusters'. They became lost to us because it was the easy thing to do to avoid facing some uncomfortable truths. When a small memorial was erected in London twenty years ago to the wartime leader of Bomber Command, Arthur {bomber} Harris, it had to be put under police guard for several months to protect it from attack. 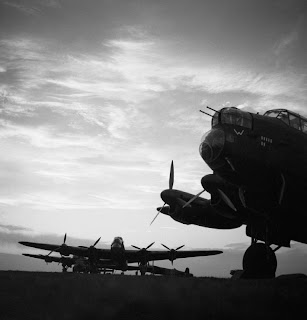 Slowly support built up around them; families who saw the injustice and servicemen who understood the contribution; politicians who had not been so closely involved as to share responsibility; historians who sought to clarify and analyse fact objectively. People saw bomber crews in the USA lauded as heroes on TV and in film and began to wonder what had happened to our men, what difference in their experience to justify having them treated with such neglect, to be expunged from public consciousness. Despite this burgeoning movement it took years to peel away the history that had been established, to remove the layers and to recognise the truth behind the myth.

Finally today these men have permanent and public recognition. 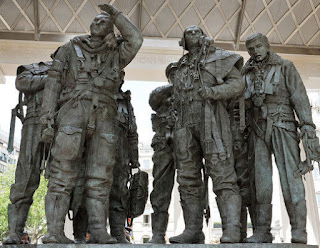 It's a story close to my heart because of my late father's involvement. I've written extensively here about their story and experiences so long ago. The memorial to bomber command may be seventy years too late but it's there and it's theirs. It belongs to them now as should unconditional acceptance and recognition by us of their stories as part of our history.


I watched a recording of the dedication service. I saw the great and the good parade in their ceremonial uniforms and finery and much of it washed over me, leaving me unmoved for the establishment preening and posturing some of it was but I watched an old man in the crowd standing there, his bowed head covered with an aircrew cap, listen attentively with eyes closed and I saw him smile and nod in quiet satisfaction when a speaker tried to describe the dedication and sacrifice of all those years ago. They're still here, these final few who served with such quiet courage, determination and dignity and who have waited so long in the same way.

Its great that at last they are honoured for there courage and sacrifice,
great writing Al,

I wonder which was more difficult--dredging up the courage to deal with battle assignments or to return and spend a lifetime coping with the horrific memories.
The men who make the decisions of war are never the ones in the trenches or in the air.
I think that in the US those who saw service in the Viet Nam conflict returned to be ignored--or treated with contempt.
Such things are never really put right, but for all its official pomp, this memorial must bring affirmation to those few living veterans and to the families of those who served and lost their lives.
Well-written--but, I've come to expect that!

Cheers Bruce. Couldn't not mark it on these pages.

Thank you MM. All war is a crime against humanity, but the criminals are those who instigate and perpetuate it. Very few who are caught up in these things, through choice or the compulsion of national service, are criminals themselves. They deserve to have their service and courage recognised no matter what conflict and no matter what country. What happened to the Vietnam vets was a dusgrace of similar proportion to that of the treatment of these men.

And thanks for the comment on quality - keep piling on the pressure why don't you. lol!

All I can say is that it's about bloody time.

Those guys went in time and time again. They KNEW that surviving a tour was way against the odds, but still they went.