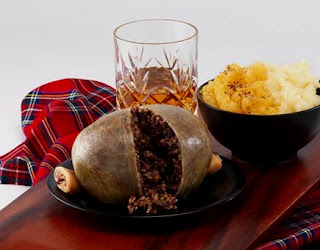 I'm heading off across country later back to home territory for my brother's annual get together in honour of Scotland's national bard. Although a bit less formal than many Burns Night Suppers we do follow the traditional elements and in addition each of  us recites a poem. This is the one I'll be doing tonight. Haggis, neeps and tatties and more than a few drams - here I come!

If you would struggle with the words here's what it sounds like.

I hope your evening has gone very well. Did you memorize the poem beforehand? Haha. I read it all and then decided to have a wee dram meself while I make supper, you know, to keep up the spirit of things.
Scotland forever!

I introduced a friend of mine to my neeps recipe and he's addicted now. Haggis? Not so much. Scotch? Yes.

Hi Rebecca - we had a great time. As for memorizing, I didn't have time as I only picked that one the day before. {Gordon had suggested on for me but I didn't like it so much}

None of the others had heard this one before and it went well for me so I was pleased with it.

dbs - I do ;ove some neeps although to be honest most often at home I mix them in a mash with carrots because I like the sweetness the carrot gives them. PLease do share the recipe you mention btw!

I love haggis but there are a lot of poor specimens about so I buy from one place only. That night was one from a local butcher and he seemed to have done a good job.

As for the uisge bha, I do love a single malt and often go for a Speyside as they're a bit softer.

DANG, that looks like good haggis. I have to be in Scotland for a Burns supper sometime.

Never mind Burns night - everyone should be in Scotland ATP! lol.