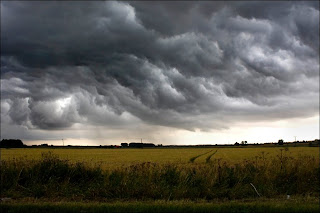 Been on my own today: the lovely G at work and out in the evening and the weather has been dour. Cold and wet with the rain driven across the garden by a strong wind. The skies have been sullen, dark grey and the day has seemed like one long cold evening. When I was young and living on the west coast I would have called it "dreich" and pronounced it "dreech" with the ch like in loch.
I had planned to be out in the garden almost all day. The hedges at front and back of the house have been left so long they are almost out of control and I am going to have to be ruthless when cutting them back. My fault of course, I have left them too long. My excuse was that there were several nests in the hedges, sparrows, blackbirds and a beautiful thrush with its ermine chest, and I wanted to wait until all the eggs had hatched and the chicks were properly fledged and away. I should in all honesty have done it before we went on holiday but of course I didn't and by the time we came back it had become a daunting task.
The front hedge is about 30m long and about 2m high and 1m deep, the back about half the length but almost another metre high. So I have been procastinating, prioritising other easier jobs ahead of it and now on the day I had cleared the decks to get it done I am forced to sit inside and look at them from the window, the wind pushing them to and fro as if showing me again how big the job is going to be. Its not nice to be mocked by a hedge you know. Not funny. The wind almost cracks as it whips across the patio doors in the kitchen where I am sitting just now. It sounds like thunder at times.
In an hour and a half I will be at the local station to pick up G, who has already sent me a text to say she is a bit squiffy thanks to the cocktails she and her pals have downed. It doesnt feel like a cocktail day to me though. This is a day for a whisky. Or rather this is a day for a malt, maybe a nice soft speyside to warm the mouth and stoke the inner furnace a little, or a nice salty iodine rich Islay malt like Ardbeg or Bruichladdich with the tang of the sea and echoes of cold nights kept at arms length by a good fire and a comfy chair. I'm out of my personal favourite Talisker at the moment with its peat rich scent,sharply tangy bite in the throat and its long spicy finish so I think it will be a speyside. Islay malts seem too much like a concession to winter for this time of the year, at least in my present mood this evening.
Ach, thats the phone. Back in a mo............

G has called to say she is on her way to the station in Edinburgh. She has had a couple of nice cocktails based on one of her favourite drinks. Krupnik is a Polish vodka flavoured with honey and she has just described a Krupnik and pear cocktail and another honey and cinammon concoction, so I suppose I can see at least the latter being ok for a night like this although she says that in Edinburgh even though its raining its warm and there isn't a bit of wind with the flags all hanging limp on the flagpoles. What a difference a few miles makes eh?

I haven't eaten since lunchtime when I decided to have the lamb curry I had made last night and boxed up into the fridge. It felt like the right thing for today but I didn't bother with rice, just a small supermarket naan bread that I found at the bottom of the freezer and heated in the oven to use to soak up the spicy meaty juices at the bottom of the dish. Nothing special, just lamb and loads of onions cooked slowly until it was all meltingly tender and dark with spice and heat. It certainly hit the spot but was more than I would normally have for lunch so it has been enough for the rest of the day, especially since it rendered me comatose for a snoozable post lunchtime hour and the fact that I have been a completely lazy git today.

Now though I'm looking forward to G coming home, a nice cuddle and the malt that has been teasing my tastebuds memory for the last couple of hours or so.