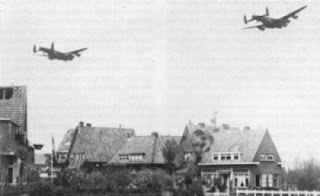 During the days in April when the squadron was 'stood down' due to lack of operational targets in enemy territory, the crews of 153 Sqn were detailed to carry out low level cross country flying and map reading exercises. No official explanation was given to the airmen. The reason eventually became apparent......


On the 29th April, 153 squadron began humanitarian food drops to civilian populations suffering from starvation in the parts of Holland still under the Nazi occupation. This tragic situation, known even today as 'the hunger winter' came about because although much of Holland was safely in allied hands, a large pocket in Western Holland (including Amsterdam,Rotterdam,The Hague and other major cities) was still occupied by the Germans. After the landing of the Allied Forces on D-Day, conditions grew worse in  Nazi-occupied Netherlands. The Allies were able to liberate the southern part of the country, but their liberation efforts came to a halt when Operation Market Garden, their attempt to gain control of the bridge across the Rhine at Arnhem, failed.

The Dutch national railways had complied with the exiled  government's appeal for a railway strike starting in September 1944 to further the Allied liberation efforts. In retaliation the German administration placed an embargo on all food transports to the western Netherlands. By the time the embargo was partially lifted in early November 1944 by allowing restricted food transports over water, an unusually early and harsh winter had already set in. The canals froze over and became impassable for barges. Food stocks in the cities in the western Netherlands rapidly ran out. The adult rations in cities such as Amsterdam had dropped to below 1000 kilocalories a day by the end of November 1944 and to 580 kilocalories in the West by the end of February 1945.  As the Netherlands became one of the main western battlefields, widespread dislocation and destruction of the war ruined much of its agricultural land and made production and transport of existing food stocks almost impossible. As usual it was the civilian population that suffered worst with many old, young and weak dying from starvation and cold. 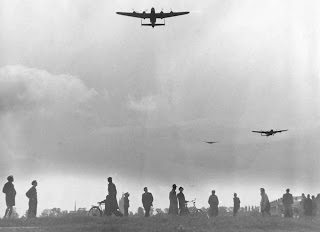 By early 1945, the situation was desperate for the three million or more Dutch still under German control. Prince Bernhard appealed directly to the Allies for help to resolve the situation. In response, protracted negotiations began with the occupying German forces.

The plan to deliver this humanitarian aid was codenamed 'Operation Manna'

Allied contingency planners eventually devised a system whereby food could be air-dropped by bombers,using panniers (called 'blocks') four of which could be fitted to a standard Lancaster bomb bay. Each block held 71 sacks (giving a total weight of 1254 lbs per block) variously containing sugar, dried egg powder, margarine, salt, cheese, tinned meat, flour, dried milk, coffee, cereals, tea, high vitamin chocolate, potatoes, etc. - all supplied from the Ministry of Food's reserve stockpiles. Before the introduction of 'blocks', a variety of possible delivery systems had been devised by squadrons acting individually. As is customary, user trials were flown, one of which involved 153 Squadron. Fl/Lt Bill Langford recalled,

"On April21st, I flew 'V' Victor to Netheravon, carrying a mixture of goodies, in sacks, slung from ropes on a Heath Robinson {home-made} device in the bomb bay. We were to demonstrate to an assembly of RAF and Army brass, just how food would be dropped to the starving Dutch. Approaching the airfield at around 200 feet, wheels and flaps down for minimum flying speed, we lined up the white cross on the ground, and pressed the button….. when it all went wrong! Sacks of peas, tins of Spam, and all sorts of containers rained from the sky, scattering the assembled brass in all directions. Not what was intended." 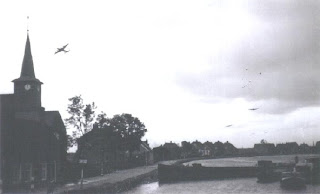 A similar presentation also took place at Scampton after lunch April 21st when F/O 'Red' Penman, flying PA 264 (P4-3rd O), successfully carried out a demonstration drop on the airfield in front of the Marshall of the Royal Air Force, Lord Trenchard, who was visiting the station that day.

Negotiations with the German Occupying Authority for a limited truce to allow food drops to begin, assumed a critical state as the death toll rapidly mounted. At Scampton, as on other stations involved, crews practised low speed/low flying techniques and simulated drops. Eventually, on Sunday 29th April, the codeword "Operation Manna" was issued; this was an inspired choice, for not only does it stand for "bread from Heaven" but it means exactly the same in Dutch. 153 Squadron promptly dispatched 18 aircraft (each carrying 284 bags of food) to a dropping zone at The Hague - all following drops were on Dundigt Racecourse.

On 29 April the people of Holland heard  BBC radio announce:
"Bombers of the Royal Air Force have just taken off from their bases in England to drop food supplies to the Dutch population in enemy-occupied territory." 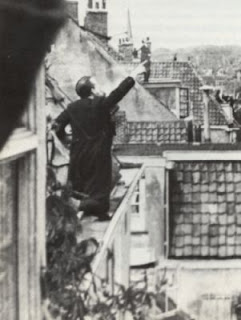 Over the ten-day period ending 8th May, the Squadron mounted 111 sorties, shared between all 40 of the active crews, to successfully deliver 271 tons of life-saving provisions. In total, the RAF dropped 7,029.9  tons; the USAF who commenced drops two days later due to concerns about the truce, contributed 4,155.8 tons.

Many crews were initially apprehensive over the realisation that they would be flying, in broad daylight, at a very low level, in full view of the German A/A defences, whose gun barrels could be seen to be tracking their flight. However, the reception by the beleaguered Dutch people, who flocked on to the streets, the rooftops and all open spaces, to wave anything to hand, calmed all fears. Subsequent sorties were flown with panache, at very much lower levels, while crews (most of whom parcelled up their flying rations of chocolate and sweets and attached them to "parachutes" made from handkerchiefs, as personal gifts for the children) exchanged waves with those below. After dropping their loads, many pilots continued to fly at a very low altitudes, waggling their wings and 'buzzing' the crowds to give them a thrill, with their bomb-aimers flashing "V" for victory on the Aldis signalling lamp. It became a carefree, cheerful occasion for the aircrews, and many could not believe that Manna drops were to be allowed to count towards an operational tour. 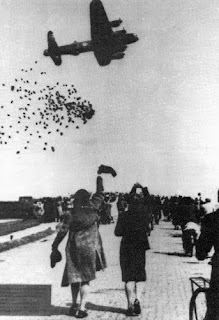 Dad recalled being terrified at flying so low and so slowly - just above stalling speed. Crews could see the German anti-aircraft guns tracking them, including the fearsome 88mm guns accurate to 20,000ft, and said he felt like they could have reached up and slapped his backside. It was an eerie feeling for crews who were used to bombing from 15,000ft or more to be flying a slow pass over enemy guns at just a couple of hundred feet.  Several Lancasters, Dad's included took some rifle fire from below but luckily no one was injured. Dad's pilot retaliated by diving onto a tented German camp, gunning the engines and blowing the tents apart!  He also recalled one trip where the pilot took the Lancaster up a wide boulevard in a town at absolutely zero feet while the crew looked up at the cheering faces in the house windows on either side. For men used to dropping destruction it was an incredibly moving experience and one Dad was incredibly proud of.

Dutch girl Arie de Jong, a seventeen-year-old student at the time, wrote in her diary:

"There are no words to describe the emotions experienced on that Sunday afternoon. More than 300 four-engined Lancasters, flying exceptionally low, suddenly filled the western horizon. One could see the gunners waving in their turrets. A marvellous sight. One Lancaster roared over the town at 70 feet. I saw the aircraft tacking between church steeples and drop its bags in the South. Everywhere we looked, bombers could be seen. No one remained inside and everybody dared to wave cloths and flags. What a feast! Everyone is excited with joy. The war must be over soon now."

For the Dutch population, the food drops signalled something even more significant than an end to starvation. They saw the streams of bombers flying extremely low in broad daylight; they saw that the German forces did not open fire upon these vulnerable targets. They were quick to draw the obvious conclusion (oddly, not so apparent to aircrews) - that this historic event heralded the ending of the war! They hailed the fliers as their " liberators". The Dutch have never celebrated V/E day. For them, there is only the one, unforgettable celebration - the 7th May - a national holiday - which they very rightly call 'Liberation Day'. 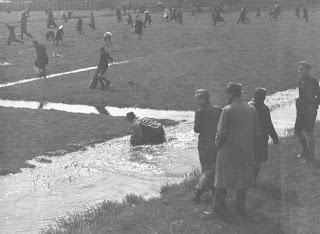 On 8th May - V/E day - which marked the end of warfare in Europe, the Squadron made its final Manna drops. During the 10 days of Operation Manna, 3 Lancasters and crews were lost; two to collision and one to engine failure. None were from 153 Sqn. 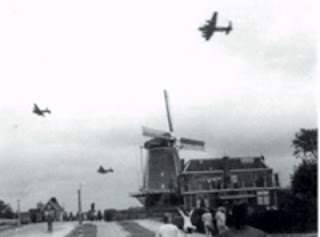 As a postscript to this story, its interesting to recall the visit of my elder brothers Dutch friends family to our house around 1975 or so. Bart and Gordon had become great friends at university and Bart had spent quite a bit of time at our house on weekends and such. So, it was fitting that when his parents came across to visit, they also came to my parents house for a meal and to meet the family. At the end of the meal Bart's Dad and mine sat talking when the Hague came up - as Bart's family lived there. Dad mentioned that he had been to the Hague a couple of times at the end of the war to drop food and Bart's father became very emotional and gave Dad a big hug.

"I was there! I was hiding from the Germans but came out to see when the bombers came to drop the food. I was there! We were so hungry. We starved through the winter. I saw the green and red flares go down and then the food began to fall from the planes. I was there at the place in the Hague that day"

Next month G and I and Gordon and his wife are going to Holland for a short holiday. We will be staying at Barts house, not far from where 153 squadron made their drops during Operation Manna.

Watch this homemade Dutch film of RAF Lancasters dropping food during Operation Manna which I found much later after posting this item. Note how low the first Lancaster is.....

WOW! Great story, well told. I have tears in my eyes.
Thanks,
Kat

In april 2015 we will celebrate MANNA: 70 years later. Thank you
liberators.

I was a witness of CHOWHOUND. Never to be forgotten.