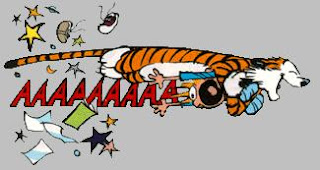 Incredibly, yesterday was a year to the day since I took my first bumbling steps into the World Of Blog and made my first post.  In 365 days much and little has changed, which is probably a bit confusing for you if you have strayed here for the first time and for those of you that know me a bit better, you are probably thinking that;

a} That's a pretty fair assessment
and,
b} Anyone who has strayed here for the first time will probably - knowing the way I ramble - still be confused by the end of this.

In the last year I've made 216 posts which surprises the heck out of me. Before this I'd never even managed to keep a diary for longer than two weeks and to be absolutely honest, even then there were only half a dozen angst driven teenage entries.

It all started because I was in the midst of crisis. I'd been made redundant by my employer completely out of the blue and was in absolute turmoil, worried about the future for my family and myself. I'd worked for the same firm for 32 years {exactly to-the-day I was initially told I was being made redundant - which strangely, naively and with unconscious cruelty, the Personnel Manager supporting my Dept Head actually referred to at the first meeting.} and had really enjoyed my job. My father had died some two weeks before and my entire world had been doubly rocked. I was also determined to fight my employer as the reasons given for selection just did not add up. These factors combined to give me lots to occupy my mind resulting in insomnia, so as I had just entered the virtual world via my own lap top - I'd used one for work but pretty much ignored the internet for any kind of entertainment previously,  but had just started to get an interest in personal blogs. So, the stage was set. I had the opportunity through insomnia, I had the material through my turmoil and I had the equipment. Mind made up I had to think of a name for the prospective blog.

I settled on 'Crivens, Jings and Help Ma Blog' - a variation - actually misremembered - from a childhood favourite newspaper cartoon character's expression . The 'Sunday Post' newspaper's 'Oor Wullie' is an image and character instantly identifiable for anyone Scottish or familiar with Scotland, having been part of our printed heritage for God knows how long. I often use him as an avatar at the start of posts.

Over the last year my blog, my imaginary friend, has listened to me on a wide range of subjects, as have those who have dropped in to read, to comment and those who've followed to hear what would be the next thing to cross the brain cell. You've heard me rant and rave. I've indulged myself in politics, in history, in social observation, in melancholy, in sentimentality and yearning. I've been a grumpy git, a cantankerous curmudgeon and surprisingly, even an occasional romantic.

Looking back over some of the posts I'm astonished by much of what has come to me, and yet I feel that I've hardly scratched the surface. I've got more confident with the blog and a style of writing. I've signed up for a writing course to explore this confidence further and to investigate what kind of a writer I might be. Will anything come of it? Who knows and does it really matter. I hope like with the blog, I enjoy the experience. If that's all that comes I'll be happy.

I've posted a lot of video clips, reflecting my love of music and concert going - and probably my poor taste in music - over the last year, and I've documented snapshots of my life here. Looking over the posts today I've picked out a few examples of what has pleased me most from the last year. If you're an old hand please forgive me, if your just passing through then here's a taster of a year in the life of 'Crivens, Jings and Help Ma Blog'.

1} Here's a tale about soup and it's part in life.
2} A story about Scots history and irony
3} A recollection of a much loved old man
4} An example of the kind of thing that drives me craaazzzzyyyy!
5} Romantic old me
6} How insomnia messes with your head.
7} Thoughts on child welfare.
8} Of 153 Sqdn RAF in war in the air during WWII
9} Living with and loving cats
10} The Lovely G  and what she means to me.

Listening to this again, one of my most favourite night time companions.

Is it really only a year since you began blogging? You have such an assured style of writing you really must go on that course and take it further. Perhaps there is a book waiting to come out . . .

BTW, can you sleep any better now?

Hullo BB, nice to hear from you.

Yes, this the first writing experience I've ever had. I'm in the throws of my first assignment of the course right now.

And no, not really. Some nights are better than others of course. Last night was 3.30am before I went to bed and back up by 8.00 this morning.

Happy "birthday" Al. One year down and heres to many more to follow. I for one hope you keep it up as I'm a big fan of your writing, and would love to see a book.

Since I have not been with you since the beginning I enjoyed reading your recap. Writing is catharsis and an eye-opener to what is bubbling away beneath one's surface, and I agree, it can be surprising to find what is hidden there, waiting to reveal itself.

Recently, on his birthday, my brother-in-law was told he would lose his job in three months as the Ministry of Forests was closing down his district office. They are also cutting over a hundred more jobs in the ministry and so finding a new job will be difficult. He can't sue for wrongful dismissal in his case, and so I wish you luck with yours (if it is still going on).

So, I hope your writing course goes well. I'm off to read a few more of your entries, and I must tell you I love Calvin and Hobbes!

That's a beautiful piece of music, thankyou for the link.