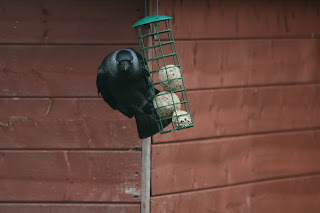 This morning I took a friend to hospital for a small operation which meant a full anaesthetic, so driving home tomorrow is out of the question. Also unfortunately, the hospital is more than 50 miles away, so - after early car washing duty - I picked up my friend and headed off for the hour and a half 's trip to bypass Edinburgh in rush hour and get to the hospital in good time. It was a beautiful sunny day here and we had a good chat about life, the universe and everything as we drove through East Lothian in the bright light of  a summer morning, passed into Midlothian to skirt the City Of Edinburgh and on towards Glasgow on the motorway for a few miles before turning off and heading to the hospital. On dropping off my nervous passenger and double checking pick up arrangements for tomorrow morning, I turned the car around and headed back homeward, although by a different route to avoid the motorway which always reminds me of work as I spent a lot of my working life on motorways trying to get to some place or other the length and breadth of the country.


By the time I arrived home I was looking forward to a cool drink and, on getting myself some fresh orange juice from the fridge, I sat out on the patio which was just beginning to benefit from the sun. I lazed a while then did a couple of odd jobs around the garden, tidying here and tweaking there. Lunch was a small smoked peppered mackerel and simple salad dressed quite sharply to cut through the oiliness of the fish and accompanied by a small dish of olives and some hummus drizzled with olive oil and a small ciabatta roll sliced into strips for dipping. All slowly savoured with a cold and very dry glass of cider. Just the job for a sunny afternoon in the garden. 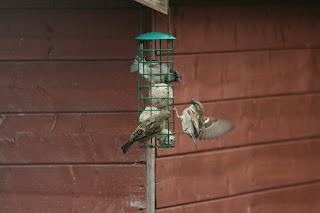 As I sat there quietly enjoying my lunch and musing back and forth, I watched the argumentative local sparrows swoop down to gorge themselves noisily on the seeds and fat balls which I have about the place, joined sometimes by a pair of cooing collared doves or one or other of our cautious pair of resident blackies {blackbirds}, rooting about for fallen seed under the feeders hung on our apple trees until they were all complainingly ousted by the noisy arrival of half a dozen of our local gang of thugs - the Jackdaws - from their lofty homes on two of the tall trees a hundred yards away. They got a last second pre-landing shock when they victoriously swooped down to find that I was sitting nearby and quickly twisted awkwardly away to land on the roof of my garden shed and the branches of the tree behind it, glaring and CAW'ing loudly at me for disrupting their plans. Gradually though they became quieter as they got used to the idea that I wasn't going to be moved by their noisy complaining and they became bolder, first one then another coming down to grab on to the feeder hanging from the roof of the shed and to spear a tasty treat from the suet balls hanging inside the wire cage of the feeder.

I continued to languorously nibble and to watch interestedly at the comings and goings as the garden slowly calmed down again and the jackdaws were cautiously joined by the birds they had ousted with their 'shock and awe' arrival. I became aware of a noise behind me where I always have an enameled ashet* of fresh water lying out for the birds. Not wanting to disturb whatever was going on, I - very slowly - over a period of maybe a quiet and careful minute - turned to see what was happening. I found myself watching from about four feet away as a jackdaw had a bath in the afternoon sun, dipping and shaking fluffed out feathers in the cool sparkling water I had refreshed just an hour before. The Jackdaw was engrossed in what seemed to me to be an almost ecstatic performance of getting the water down deep into those feathers. I could almost feel the relief it must have been bringing. 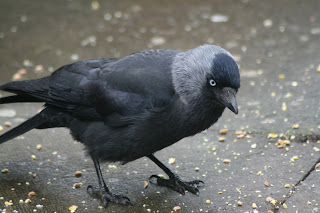 Now what?
As you would expect, after a moment the bird became aware that bath-time was being observed and not from very far away. As we sized each other up I was struck that those cold blue eyes seemed to be working out whether I was a big enough threat to warrant an alarm call and a quick getaway or if extending the apparent pleasure could be risked. Abruptly, the bird turned back to what it was doing and apart from an occasional halt to stare at me with a  "Do you mind? I'm trying to have a bath here!" kind of look, we continued like this for several minutes until the Jackdaw could bear no more of my rude attention and hopped away from the dish with its dark surround of spilt and splashed water, fluffing its feathers back into a semblance of order as it headed casually over to the apple tree in search of a few tumbled seeds. Finally able to move again, I turned back to the table and continued with my lunch in company with my hungry visitors.

You have a gift for caputuring the essence of a few moments--the kind we sometimes call call "ordinary." Keen observation and the ability to find descriptive words, turns the commonplace into a shared enjoyment.

Love your own healthy eating option, and the balls of lard for the birds! Care for our wildlife should only be taken so far, let them eat sat fat balls, preferably with lots of e-numbers.

MM - thanks - you're always so encouraging with your comments.

Swifty - I would hate to see the BMI index of some of the regulars at Al's 'eat all you can' free buffet, served daily.

Mmmm...that lunch sounds delish. Our crows must be direct relatives of your jackdaws. They are bold, opinionated, but fascinating creatures.
Hope your friend heals nicely.

None of the birds in our garden take any notice of us at all, they carry on regardless of what I am doing out there.

Sounds delightful, although, I don't think I have ever eaten a mackerel. Have you ever noticed that everything tastes better outside, especially after you have done a good deed? You have a very lucky friend.
Kat

again a brilliant post Al,had my mouth watering at the fish and then the cider...
jackdaws are amazing birds, and clever!
i love to put pretend words into animals mouths,just like you discribed...great fun!

Hi Alistair, what a beautiful picture you painted...but you are going to have to watch that coffee, nose thing! So glad I gave you a laugh!!!!

Kat - Outside eating does add something doesn't it. Mackeral is a great treat and cheap and plentiful.

CK - a cider helps almost anything I think!

Julienne - welcome to the blog. Drop in anytime... I'll be careful with the coffee I promise.