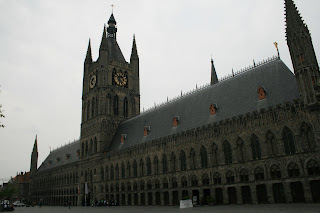 
I looked out of the car window from my seat in the rear as we drove across Belgium to Ypres and Paschendaele. For mile after mile the country all around was flat and open, gently undulating, the road occupying a consistent slightly raised position as it crossed a land which was fertile and full of farmland, a throwback to early history perhaps when roads had developed on the higher ground as the drainage was better and open view helped wary travellers see any approaching threat.

Gordon and his wife were in the front of the car, the lovely G and I in the back. The holiday had initially been planned as a boys get away, something we have done for a couple of years now, and originally intended to have been a battlefield tour following in the footsteps of our Grandfather who had served here in WWI, but our plans had changed to include our wives and we curtailed our plans to a broader itinerary. This trip was going to be our one chance to spend time in Belgium looking at Grandads history, although we also spent time looking at  a few WWII sites in the part of Holland where we were staying.

From my viewpoint in the rear I could look out windows either side and noticed that even from a minor elevation such as the roadway the view was extensive. Given the reason for our visit I was struck by the defensive advantage of even the slightest higher ground.  A difference of even 30 or 40 feet would have been highly significant. It very clearly brought home why this had been a machine gun dominated killing ground. I felt chilled in recognising this so casually as we passed through at 90 kilometres an hour, thinking of how it must have been obscenely obvious to those stuck out there all those years ago. The thought of climbing out of cover and walking across those flat expanses towards machine guns, barbed wire and infantry filled trenches just doesn't compute within my modern mind and sensibilities.

Our Grandfather had enlisted early in 1915 when aged to do so and after basic training had been sent to Gallipoli as part of the ill fated attempt to open up a second front in the Dardanelles as a means of breaking the deadlock in western Europe. A simple country lad he found himself in an alien landscape in Mediterranean heat in the same thick woolen uniform that the troops in France and Belgium had been given. It must have been awful. Two days after landing his regiment was sent into the line as part of the 52nd division, almost 11,000 men. Within 10 days five and a half thousand of them were dead or injured and the rest found themselves hopelessly outnumbered and pinned down in a relatively small area, backs to the sea, a situation that would remain for almost 9 months. Existence in those fetid, fly blown trenches, where dysentery quickly broke out due to the inability of men to maintain any semblance of personal hygiene or sanitation, exposed to constant fire as they were due to being completely overlooked by the enemy positions, was a hellish experience. Shot himself during one attack on enemy lines,  he recovered and was returned to the trenches until the troops were withdrawn in January 1916.

The remains of the two battalions were split, some to Palestine, the rest - including our Grandfather - were sent to the western front where he would spend the rest of the war in and around Ypres and Paschendaele, amongst other places. In total he spent 3 years in front line trenches and survived being shot a further twice, returning to the front line each time. 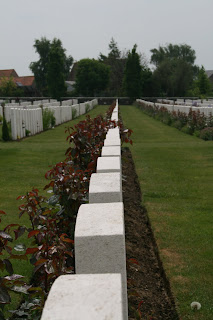 As we reached the outskirts of Paschendaele we stopped at the New British Cemetery, where newly excavated and identified soldiers are re-interred. It looked small and well tended as we parked, but it wasn't until you entered and looked at the information plaque that it became clear that there were three thousand British and Commonwealth graves in this small and carefully tended space 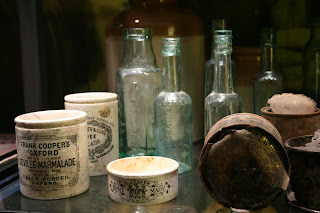 The excavations which have taken place have also brought to light some of the everyday items used by soldiers, some heartbreakingly familiar even today as I immediately recognised the branding of a favourite marmalade that often sits on our breakfast table. Poignant signs of an attempt at normality in the middle of war where there was little chance of  a normality of any significance. 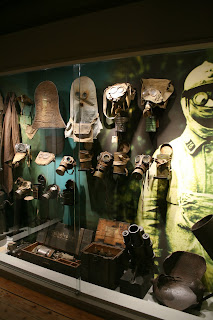 After spending time at the museum in Paschendaele we moved on to the beautifully restored town of Ypres. It's one of those places which casts a spell over you and the lovely G and I agreed it's somewhere we would like to visit again, despite the constant reminders of the destruction of man and place that are all around. We spent the afternoon exploring the town and, while the girls left to do some shopping, Gordon and I headed into the enormous and powerful museum and exhibition which is contained in the Cloth Hall in the main square 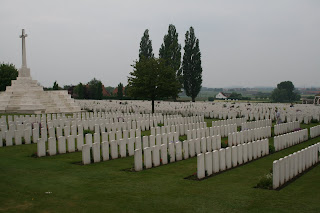 There are places where you can feel physically assaulted by the effect of history. I first came to understand that when The Lovely G and I visited Auschwitz concentration camp a few years ago. The reality of an immense and obscene wrong pressed heavily down on you and replaced curiosity and historical interest with a real sense of sadness, tragedy and deep foreboding of what 'civilised' man is capable of. I left that dreadful place mentally and physically exhausted with a heavy heart and a solid headache, glad to have been but not wanting to ever return.

I felt the same when we visited Tyne Cot cemetery, one of the largest in the battlefields. Unspoken need saw us peel away from each other and walk in solitary contemplation around what is literally a field of fallen. 12,000 graves and the names of 35,000 missing men inscribed on wall plaques confront you with a reality that's impossible to ignore. Boisterous teenagers brought to visit on school trips fell quiet after a few minutes and walked silently on. The path to and from the cemetery to the visitor center contains hidden speakers which softly list the fallen by name and age, an endless chain of reminder and remembrance.

It was a place of sobering impact that left me thanking my lucky stars that my generation never went through anything like that. I think all politicians should be made to walk round somewhere like this every couple of years and consider what benefits any one of those men could have brought to humanity. How many doctors, inventors, thinkers, scientists or artists lie all around in a place like that. Perhaps then there would be less conflict in the world. {or perhaps conscription to front line forces of politicians sons and daughters would be needed to reinforce the effect} 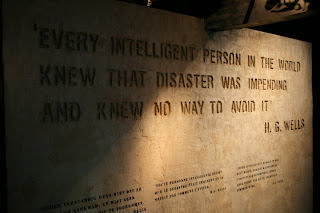 Tablet at the entrance to Ypres Museum.

My thoughts then and since have often drifted back to think of our Grandfather who came home a changed man from that who had gone away nearly four years earlier. Caught injured and exposed in an artillery bombardment while a medical station he suffered from what's now called Post Traumatic Stress Disorder but was then called by the more graphic and in his case more accurate 'Shell Shock'. By what little margin did he avoid lying there in Tyne Cot or one of the hundreds of other cemeteries that mark the extent of battle. That thankfully he did allows me to write this today.

He returned to his job as a country postman but very soon began to suffer increasingly frequently from episodes of shaking and traumatic hallucination which confined him to a wheelchair by the time of the Second World War, and ultimately to being completely bedridden. By the time I came to know and love him as my grandpa he could barely speak and shook constantly, something as a child I accepted as being completely normal and just him.

He died in 1967 having lived with the effect of the horrors of those trenches for almost fifty more years.

This was beautifully written Alistair. These places where history, especially awful history, is remembered and documented are so important to our humanity. That is quite the story about your grandfather, who endured so many horrible scenes and life-threatening injuries. It truly is heartbreaking to think of the effects of war.

Al;
You do have a gift for absorbing the nuances of a place or an event--past or present-- and distilling them in a way that causes me to reflect. Not, I suspect, always comfortable for you to do this--nor does it make for "light" reading.
I don't know that there is a cemetery to mark a formal resting place for those who fell during the second Battle of the Marne, where my g-uncle was killed. I think he and those who died with him were buried at "Hill #--".
He was not allowed to write in his letters home his location as it connected to towns.
Such a waste--lives lost or dreadfully altered.

Thank you for sharing this. I long to be a WWI historian. Here in "the states" there is only one large WWI museum. It really is the Forgotten War over here. I mainly study the aviation advancement of WWI (I'll admit I'm enamored with Richthofen). The trenches leave me feeling gritty & lost. My great grandpa fought in the war, but he would never talk about it. Today we know about PTSD... it is so sad that back then they just thought the men were cowards or other such nonsense.

I haven't even been to Gettysburg or any of the battle sites here, but some day I plan on seeing the filled in trenches of Europe. I know the feeling you are talking about. I get it when I hold a hundred year old newspaper or any historical item. The feeling one gets at the places you have been must be indescribable. People ask me why I study history; it is because of THAT feeling.

Welcome to the blog!

Thanks for your comments. I wonder why WWI is so little recognised in the US?

What ever you read I hope you enjoy it.

I'd really like to thank you for bringing this post to my attention. I read through your account of the trip in Belgium with great interest, you've written this with very evident compassion, and the story of your grandfather with trembling hands is terribly moving. He was fortunate indeed to have survived both Gallipoli and Ypres, two of the worst places, their names are synonymous with utter barbarity.

Welcome to the blog and thanks for the comment. I found the battlefield had huge impact, particularly as they are in the main such normal and benign places today. The contrast of then and now is palpable though. Makes me shiver just thinking about it. I have no idea how any of those men coped, regardless of nationality.