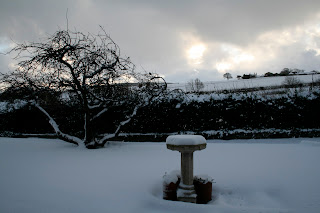 Outside the front door this morning.
Hullo ma wee blog,

I'm sitting at the kitchen table as usual and it's late on Saturday night. My Lovely G left me hours ago and is now fast asleep and snug in bed while I am slowly getting to the stage of cold between the shoulder blades that means that I am far too cold for comfort and also means that when I do eventually go to bed, that I'd better stay away from that aforementioned warm and snug flesh that will be lying temptingly beside me otherwise instant and severe retribution will descend upon my person.

Strange how several things go wrong at the same time. Although this week I, at last, got my car back from the repairers with a shiny new front bumper and skirt { they valeted the whole car so it looks a lot better than when it went in.} back home at the house though it seems like if anything could go wrong, it would this week. Firstly our built in microwave oven packed in, then the proper oven underneath and the next day our dishwasher - my 'beloved' dishwasher - died a lingering death. You can still hear it wheezing and trying to turn over but you know it's a hopeless case, it just doesn't know it's gleamed it's last load. Thankfully all are covered by insurance protection for repair so we had an engineer turn  up to pronounce on our misbehaving 'white goods' {which is an odd thing to call them as most of them are silver}. A talented man, he resurrected the dishwasher, at least long enough to do one final load and for him to make a dignified exit, identified the malaise affecting the fan oven and ordered a replacement element and gave the microwave its last rites. Then our little phone system packed in so that only one of the three phones was working. Of course the one that was left working was the one that was furthest away from you any time it rang. 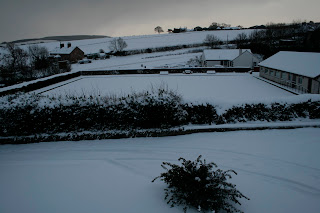 From upstairs.
Last night snow arrived. Although the East coast has been hit by widespread snow over the last few days, our wee corner avoided it and although there had been the odd flurry, it came to nothing. I knew as I watched the news reports of cars skittering and slewing down wintry roads that I shouldn't be smug, just grateful, but it's been hard - with a newly repaired front end - not to have been over pleased that others were suffering and not me. But last  night the snow that had been promised all week finally came and the roads, untouched by any snow ploughs or gritters, have quickly become challenging. I took the lovely G to Dunbar station this morning for her train and hoped beyond hope for a thaw as we were planning to go through to Glasgow later in the afternoon for a concert, but several snowy hours later I decided that it was a daft notion to think of going so far in weather like this. I did however go to pick up the Lovely G from her Edinburgh office so we could instead go looking for a new microwave.

It was a complete white out as I left to pick her up, snow whipping horizontally across the windscreen or doing that maddening, demented straight on frontal attack on your vision that can make you feel disorientated. Within half a mile I was seriously thinking of calling ahead to advise that maybe she should just get on the first train to meet me in Dunbar and we go home and have the rest of the day in front of a roaring fire. The phone rang - my Lovely G does like to check I'm on schedule - and she listened without much sympathy as I explained in worried tones about how bad the road was, how little could be seen outside the window in front of my face. "Well it's perfectly OK here. The sky's blue and there's no snow anywhere!" came back at me with mildly disbelieving tones. Heartened by such encouragement I drove on for ten minutes in the same all consuming blizzard until suddenly and quite without warning, I emerged into a blinding white landscape under a beautiful sky, pale blue and lilac in the bright sun. East Lothian has a beautiful and dramatic landscape under ordinary circumstances,  with its real contrasts of rolling farmland studded with the rocky outcrops of the volcanic plugs of Traprain and North Berwick Law's and just offshore, The Bass Rock, but coming from a literal snowstorm into a Winter wonderland, it was doubly so.

By the time I had passed Haddington the weather was all behind me and the road, although still only one lane of dual carriageway was relatively clear, I had a clear run into Edinburgh ahead. Despite all the amazing scenery around I was still anxious about the return journey, even more so as I looked at the huge black cloud behind me in my rear view mirror that showed what I had just come from. I knew I wasn't going to be in the frame of mind to concentrate on doing any shopping.

And I was right. But, that's a tale for another post, one of my ranty, grumping and curmudgeonly howls at the moon. 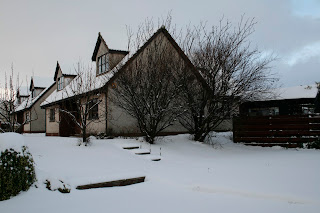 Looking back to the house.
Today although the snow is about five inches deep in the drive and drifts up to about a foot or so here and there, I'm quite mellow. That won't last though as I have a long standing arrangement today to take friends to the airport for a Winter holiday flight to sunnier climes. I can feel the apprehension rise even as I write this as the forecast is for more heavy snow today and having driven yesterday I know that despite claims of plenty of road salt in depots, the financial crises means that a minimum of work has been done on gritting the roads and the drive will be on a potential skating rink, so I'm bracing myself for a bum clenching couple of hours driving there and back. 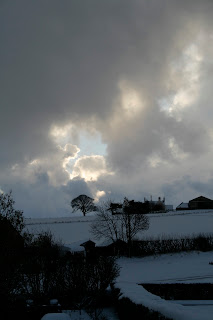 Nice post Alistair, very evocative of Scotland in the winter, and one of the reasons (picturesque though it may be) why I really don't want to gome back to Bonny Scotland in december or January.
I was sitting on my top deck at 6 pm yesterday, drinking an ice-cold beer after mowing the lawn. The thermometer read 32C, though I think that was a bit of an exageration, it was nearer 27 in the garden.

But I still like it here. Although I've always wanted to have a wee house in the S. of France {nothing too posh} and spend my leisure years between the two. I'll need to get a job pretty soon if that's going to stay as even a pipe dream.

We have relatives near Hamilton in NZ, a Swiss cousin of my wife who met a Kiwi and moved out there several years ago. It would be nice to visit. From any photo's and reports I've seen it looks stunning.

Cheers for all the visits.

In a way, I think we might be living the same life but I'm here in Northern Canada. I have the same beautiful wintery view out my window (although yours is better because mine is a more urban view),my dishwasher is doing odd things too(and may need last rites soon) but I have a lovely T (instead of a lovely G).
P.S. I stumbled upon your blog by accident but I will be back because I really enjoy your writing voice..."bum clenching couple of hours" = awesome.

Hi dbs, Thanks for stopping and for signing up. It's an absolute coincidence but I found your blog a couple of days ago and bookmarked it for a return visit as I'd only the briefest of time for a quick scoot round.

I completely identified with this post, Alistair. When the prospect of driving in snow looms before me, I can rarely think of anything else, and I get very little pity from my lovely V.
By the way, you live in a stunning location - lucky, lucky!
And for me, it's tummy clenching, not bum clenching. :)Cheers

What's more, that is exactly the type of house I imagined you to live in.

I am lucky living here. Glad the house is how you picture it. Hope the bum clench wasn't too indelicate......lol