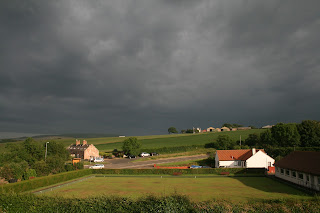 I'm sitting enjoying my morning coffee on the step at the front of the house which is wide and comfortable in the (fairly) early morning sun. I decided to bring the coffee here a few moments ago when I was filling the birdfeeders on the apple trees at the back of the house and the old pear tree at the front. I've conscientiously fed the birds around the garden for years and we now have a prodigious menagerie of various species that like us enjoy the benefits of living here.

I can never quite make up my mind whether the birds rely on or predate on our efforts as a bonus. Certainly they manage to get through huge amounts of seeds and nuts and assorted bits and pieces from the kitchen laid out on the wooden bench on the patio or from the feeders. Although I filled the seven feeders just the other day every single one was empty this morning. I picked up the large white lidded bucket from the side of the patio door as I left the kitchen and realised that the seed we have is almost finished, and finding the peanut feeder at the front of the house is also empty I'm going to have to buy more of them as well. Like most things these days even peanuts don't cost peanuts anymore. 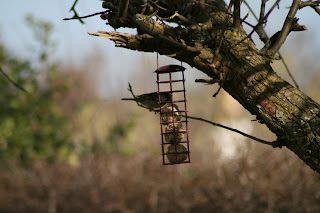 I like our garden. It's big but not too big, shabby in places and tidy in places. The big pear tree, the oldest in the garden, sits just left of centre on the far side of the front lawn and its tallest branches stretch over the sunken drive towards the high hedge that separates us from the local Bowling Green. I enjoy driving beneath the oldest tree in the garden every time I leave or come home, especially when its branches are heavy with fruit. Yes, I like the garden the way it is – tidy but not too tidy, shabby but not too shabby. A bit worn and definitely a bit lived in but generally comfortable and fit for purpose. A bit like me in many ways I suppose. 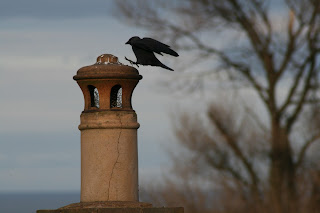 Of course I should really do some work out here is what I'm thinking. We've recently scarified all the grassy areas twice in a vain hope of removing the moss that seemed to be the biggest part of the lawn and I really need to start feeding the grass with a feed and weed combination. I love the feel of grass under my feet and often walk barefoot when out feeding the birds. The moss made it feel even more luxurious but it didn't look great hence the scarifying. The problem is that ever since we've done that bad weather has stopped me from starting the next phase. I really should weed between the paving slabs in front of the house or in the borders and under the windows too but although I love the garden, I hate gardening - well for the most part anyway. I suppose retrospectively I quite enjoy the gratification  and results of having worked in the garden, so now I'm pondering where to start – is it cutting the hedge, cutting the grass, doing the weeding or the feed and weed – when my next door neighbour appears. Oscar, his large black dog, comes over towards me, tail wagging. He would be running but his tail is wagging so frantically that it seems to act like an air brake and he's actually moving only slightly faster than a walk, giving me time to put down my coffee cup before he gets here to push his happy face towards me for a bit of meet and greet. The neighbour gives a wave and asks if the dog is disturbing me and gets a wave and a negative in return. Meanwhile Oscar has pushed himself between my knees, turned around with his back to me and sat down even though his tail is still thumping wildly which makes his whole body comically vibrate. I bend over him and play with his ears, stroking and scratching his head, neck and shoulders while he nuzzles my hand as he slowly calms down.


Oscar and I survey the garden in front of us amicably together and I ask his opinion about where I should start. Meanwhile my neighbour has disappeared only to return with what I heart – sinkingly realise is a lawn mower. Now, don't get me wrong, our neighbours are fantastic but if I had one criticism about them it's their garden. They may not look, they may not behave like fanatical gardeners but their garden just takes the biscuit. It is perfect. No really, I mean it. Perfect. There isn't a leaf, twig or a blade of grass out of place. Now I could be hypercritical and say that for me it's too ‘Parks and Cemeteries’, all short grass and perfectly trimmed edges but let's imagine that I haven't said that. It has all the symmetry and aura of one of those perfectly staged Japanese Gardens and makes mine look like a bombsite and now I feel that if I even start to do anything in the garden it's going to make me look like I'm just trying to stop the local authorities from giving me a garden ASBO* by bringing it up to the minimum legal requirement. {not that there is such a thing} 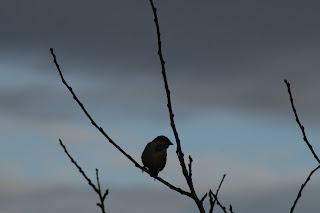 My neighbour looks over, waves again and asks if the dog is okay where it is. I smile through gritted teeth and wave, saying “Of course. No problem”. I pat the dog on the head and head back into the house returning a moment later with another coffee and Oscar and I resume our contemplation of the suddenly transformed into a disaster that is my garden. The shabby chic has disappeared, the birds have fled and somehow now it just looks neglected, the grass has grown, the weeds are enormous and the scarification has left huge patches where the remaining moss has died and turned brown. I look from my garden to my neighbours and back again and my heart sinks.


10 minutes later my neighbour collects his equipment and disappears around the side of his house having improved on the perfection that existed when he started. How does he do that?  I look at the two gardens. His garden is a colour photograph in high definition, mine a  grainy sepia one that's been neglected for decades.

I almost wish the garden was covered in snow again. Mine looked great then. 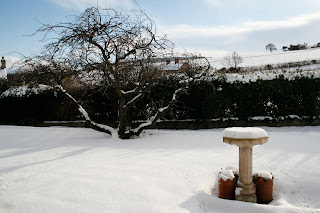 I stand up and walk forlornly towards the garden shed and its tools. 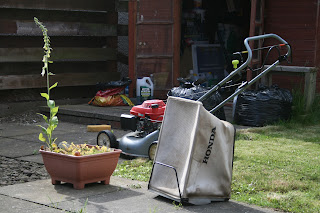 See you {much} later.

A mans job is never done...

Oh I feel for you.
The last time we had a big garden, I had 1 nice lawn in front of the house, but the other 2 acres were more along the lines of a "natural" garden. Much like you've just described.
It's just too much work.

Ach - just feeling sorry for myself this morning. I cut the grass and did some weeding and it looks a bit better.

Oscar went over and helpfully dug out some of the border in next doors garden, throwing earth back onto the lawn. That made me feel like I wasn't in it all alone too which helped!

We are planting the garden today. Hopefully. The hopefully refers to the eventual outcome. Maybe this will be the year I garden isn't struck by disaster yet again.

Enjoyed this post thoroughly, as I relate completely. Our front garden is mostly moss, which my husband doesn't like, but I say, why fight it?
No even peanuts cost peanuts anymore...too right!

Yes, I love the garden and the idea of gardening, but when it comes right down to it, well, it's work isn't it?
More fun to read about it and plan for it than to do it.
Cheers,
Kat

Sorry Rebecca/dbs - I thought I'd responded to you.

Of course I'm hoping yours turns out better than mine buddy = well almost anyway. Ha.

I may just have to go with the mossy look. Not sure there's enough weed killer in the world!

Kat - I'ma typical bloke when it comes down to it. I complain about it but once I get started it's not so bad really.

I wish it would only grow on my days off though.

I meant to get back to remark that I greatly enjoyed this essay with its touch of wry humor--but I was in the garden--which sadly isn't looking much better for my pain and efforts.
Somehow a garden is never quite finished--always more weeds popping up, or something that needs to be pruned, or moved. We inflict this on ourselves because, when all is said and done, we really do like to garden.

Maybe that's true MM - but I'd like to find out if I liked it even better if my Lovely G did it instead of me!