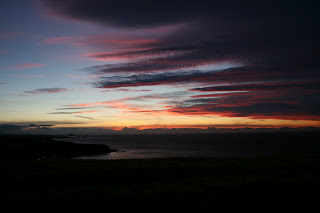 I stand outside where I’m working and savour the coffee in the cool of the evening, letting its heat and dense flavour work out the kinks that have grown unnoticed over the last few hours. It’s been a hard shift and this is the first chance I’ve had to stop even for just a drink in several hours. The garden is cool and tranquil in the late evening light and I linger there away from the house which has absorbed so much heat from the day.  I notice a cloud of tiny black flies gathered under the eaves at the nearest corner just under the roof, perhaps drawn by some warmth escaping into the night or reflected by the pale stone of the building. They twist and turn in the last of the sunlight until suddenly three swallows come tearing round the side of the house banked steeply on their wingtips and cut through the swarm. The moment is imprinted in my mind like a slow motion high definition movie and I see the birds’ creamy bellies flash crimson as the last rays of the dying sun hit them perfectly. One of those incredible memories you might carry a lifetime.


An hour later, within moments of leaving work, the car crosses the battlefield of Prestonpans, where the screaming charge of Charlie's Jacobite Highlanders routed the Government redcoats in 1745.  The tune of ‘Hey Johnnie Cope’ comes to mind; the famous song written soon after which commemorates their victory and lampoons the English General as being the first soldier ever to bring his king news of his own defeat, so quickly did he run for Dunbar and a ship to safety in England. A few moments later I follow his route as I swing the car onto the A1, the famous Great North Road; the easiest, most direct of the ancient routes from London to Edinburgh and which echoes many of the trails of long forgotten combatants in one direction or the other across the centuries. It will take me to Dunbar and beyond through a landscape littered with the echoes of its history.


The car accelerates and a steady thrum builds between tyres and road while I turn up the volume on the classical music station I’m listening to. Sometimes, especially on nights like this, classical music is the only thing for me and there’s a Debussy piece oozing from the speakers as I lose myself in music and in pondering potential strategies to help a client facing huge challenges from his autism. The car cruises on at a steady pace without any conscious thought from me as the road rises from the coast. There will never be more than a few miles between the road and sea for the thirty-odd minute journey while I cut across the county to home.


Debussy gives way to Chopin and to a wonderful choral piece which therapeutically massages the day away. Outside, the old county town of Haddington and its neighbour, the huge, rocky plug of Traprain Law - hilltop capital of the Celtic Votadini tribe in the first centuries AD – pass unseen but somehow silently acknowledged in the gathering darkness. Speed increases as the car swoops down Dunpender hill and barrels across the high bridge spanning the Tyne and a mile further on the lights of nearby East Linton catch my eye– linn is an old Scots word for waterfall so this is ‘the village of the falls’ – and I realise for the first time that I’ve been on autopilot for more than a dozen miles. I’ve no recollection of the road since turning onto the A1 almost twenty minutes ago. Its incredible how you can drive this way – doing something so familiar that one part of the brain takes control to manage perfectly while another part wanders free. I wonder just how safe it is, or am I just kidding myself, fortunate that a deer or badger hasn’t jumped out from the gloom around me. Yet I don’t feel tired. I feel alert and engaged apart from this ‘absence’ of miles. If anything my thinking while on the road has revived me and I’m sure I’ve been safe. But just in case I decide it’s time to pay attention and get on with the last ten or fifteen miles to home.

The road to Dunbar and beyond is a level ten minutes of fairly straight dual carriageway interrupted only by a couple of roundabouts. From there the road rises on the sleeve of the hill from where another Scots army descended long ago to fight an English one, this time with devastating results for the Scots. By the time I’ve mused this I know I’ve passed the ‘battle-stane’ memorial which commemorates the event and am passing the site of the oldest house found in Scotland so far, a roundhouse constructed eight thousand years ago. I carry on past little villages tucked away unseen in the dark folds of The Lammermoor Hills; places whose names echo their Celtic, Pictish, Saxon, Viking, Northumbrian, English or Scots heritage, and hint at just how crucial this easily traversed little coastal plain has been to human existence for millennia. How much turmoil in the turning of centuries?

I speed on past Torness, the nuclear power station, incongruously and garishly lit in the midst of all this history, the car rushing to get out of its light like a nocturnal animal. The road is empty as far as the headlights can reach and I’m alone for the next two miles by the water. Another minute and I’m crossing a bridge high over a tumbling stream in a deep but narrow ravine and feel the four earlier bridges still nearby in the dark. The road tilts gently up toward a brightly lit roundabout and here I swing right into the dark again and take the hairpin as the road turns back on itself before the short climb to the brow of the hill, past the graveyard and on down to our ancient village originally named for a long dead Viking where at last I turn into the drive and put such thoughts from my head. The car bounces on a pothole at the start of the drive and suddenly I’m back in the now. Debussy is again pouring from the radio and I realise I'm completely exhausted.


Despite that it seems my autopilot has got me safely home again.

Thanks for reminding me about this one...have'nt listened to it for quite a few years.

Sorry Alistair, I got confused and that you'd put up two posts. One on Debussy and one on your autopilot journey home.

Another beautifully written piece, illustrating your love of the area and of history.

Autopilot driving can be dangerous, but we've all done it. I used to be a rep, and there were a number of times I was on autopilot from Birmingham to Glasgow.

This driving is quite familiar to me. Like you I travelled across the UK by car and often found myself many miles from last remembered.

Something really soothing about Debussy isn't there. Always makes me think of summer gardens and elegant women dressed in fin de siecle fashions.

I hate getting bounced back into the now lately.

Speaking from experience that ia....

Some of your best writing is this sort of piece which I think of as a contemplative essay.
I came back to read this the second time and leave a comment. Thinking about your route prompted me to do some look-up on the great North Road.
I definitely prefer the byways to the main drag--unless someone else is driving.
Well written.

Thanks MM - the modern road is two lane dual carriageway but you can also ride almost totally alongside on the original old road. I sometimes take the long way home, but sometimes you need to get there more quickly. After a shift is one of those times. We all like a cuddle - right?