In a manner of speaking 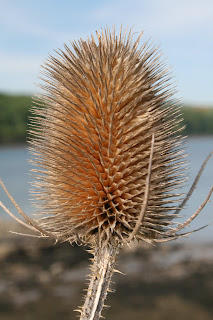 I'm a Scot and like many of my kind, fiercely proud of that.

Being brought up where I was, when I was, and especially by whom I was, I have always had a keen sense of who I am based on family, family values and heritage. Its a fact that most of us share regardless of where we live in the world and part of that unique and diverse cultural identity that makes us, well..........us, no matter if that is German, Italian, French, French Canadian, Catalan, Schweizer Deutch or Occitan.

One of the most important aspects of that heritage was the language I was brought up with, which is deeply rooted in rural Ayrshire and its past. My father was a great natural speaker of Lallans - Lowland Scots - which unlike the Gaelic, is rooted in English but IS different and IS still the everyday speech of the ordinary man in the street.

Like any mother tongue, any living language, it constantly changes and evolves with new words, and developing dual or even new applications for words or phrases. This change is happening faster than ever before thanks to modern communication and constant exposure to influence from film, TV and music that previous generations couldn't have experienced, { at least until the second world war. }
Change is no bad thing though, in fact it can be really positive. After all the whole point of language is to allow us to communicate, share and touch other lives. It also lets us share our heritage, culture, identity, character or whatever you want to call it. But we seem to be in danger of losing just a bit of our identity, our uniqueness, by becoming homogenised to the constant onslaught of American TV shows and gansta rap among others. Being what most kids seem to hear most its only natural that some is incorporated into daily use. As a kid was I any different.? After all we deliberately create a language partly to be different to our parents generation, to help define us in our time and place. { What would Aberdonian rapping sound like I wonder?}
{ Despite signs of resurgence in modern writing and poetry, to many, especially to institutions and even shamefully it would seem our own parliament, Scots is regarded as a non language, only a dialect or even, with a complete lack of tolerance and an active policy of educational reduction, as a bastard aberration that should be actively discouraged, regarded somehow as degraded, common, or showing a lack of culture or intelligence.
Much like the Gaelic was culturally ignored 50 years ago and the language was dying on its feet, so Lallans in all its dialects and its own cultural diversity is ignored and underfunded, never to be heard in civilised circles or so it seems. Strangely, and thankfully, the Gaelic has undergone a real change in perception and with funding and encouragement is growing in popularity and influence. }
I wouldn't propose that it should be even the norm for communication. After all English is possibly THE most common international language today.
BUT.

What I love about Scots is the timbre, the tempo and the connection it gives to a tradition of communication. It has its place. Its OF its place. All language is important and the loss of language is a loss to the world.

So, I have decided to introduce some of my 'mither tongue' to you. I'm not a scholar but I love the language and as Dads not hear to talk to me any more I'm probably a bit scared that I will lose much of my grasp on the older use, Dads kind of speech which was pretty auld fashioned, even when he learned it. The Ayrshire tongue of a hundred years ago maybe. But, from now on you can expect to see some wee bits of it creep in. When there is a need, then of course I should explain what a particular word or phrase means. In fact perhaps my next post should be a glossary of some of the more common - in the true sense of the word - expressions and words that I will use. As Scots is much more common as a spoken tradition than written and as far as I know there is no written standard thanks to educational neglect then I'll write it phonetically.
Don't worry either that its going to take over the blog. Its about communication and after all its just a bit of the real me. It'll be fun !

But now I've got to go. Its an all day training session for the Childrens Panel to keep us on our toes and up to speed with legislation.

Interesting. Although not Scots, my mum had some formative years in Carlisle. Her intonation was startling when she returned to Kent.

Hello there C-pup and thanks for coming by. I hope you can bide a while.....

funny thing is that with Carslisle on the borders on the English side a huge amount of the way their language is formed is common to Scots, especially S.W Scots, not just in the intonation but in the sentence structure too.