Coffee on the doorstep 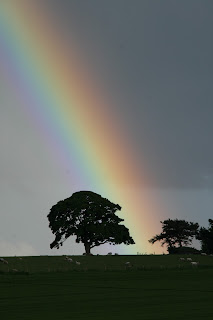 I fill the cup with boiling water from the small urn on the kitchen worktop - a nod to our attempt at being economical with expensive power bills - and the smell of coffee wafts upwards. Although it's just freeze dried stuff it's decent enough and I'm almost drooling at the thought of that first sip of the day. I resist the temptation to take the hit now and pick up my book and head for the front door. The house faces South and catches any warmth the weather may give {not much this month - what IS going on with that? It's supposed to be summer!} and is a favourite spot for a quiet coffee and contemplation of life the universe and everything of a morning. Today I've already been outside with my bucket of seed and filled all the feeders front and back of the house, topped up the niger seed feeder which is a favourite of our local goldfinch population and I've dropped a few suet balls in the cage like affairs which hang from the shed at the rear of the house and the old pear tree at the front. The front of the house is the main feeding area for our local birds - it used to be the rear of the house but for some reason there is a much bigger variety now visiting the front, leaving the rear garden as the domain of sparrows, pigeons, starlings and jackdaws and a couple of pugnacious robins. The old pear tree here at the font of the house, left over from last century's orchard from which the house takes its name, has several feeders of various kinds hanging from it and already there are almost a dozen birds either feeding or hanging around on branches looking for the chance to jump in as I put my coffee cup down on the step and take a seat beside it while I start to rifle the books pages to find my place.

A few seconds later I smile in contentment with the first sip and settle down in the warmth of the early morning sun already starting to lose myself in the tale of a fictional Edinburgh detective inspector and his assorted ne'er do well adversaries. Although it's warm it's breezy and from around the garden there's the rustle of leaves and the movement of wind across my bare arms and face. Despite that it's comfortably warm -for a Scotsman at least! Several minutes pass and the coffee gets lower in the mug as I sometimes read and sometimes just watch the comings and goings on the tree in front of me. Around the corner, just out of sight, comes the sound of a wild squabble from the feeder attached to the window of the library where I sit when it's not so warm as this morning. Two juvenile starlings in their muted colours dart across from the window to the tree continuing their altercation as they go until seperate perches among the leaves end the dispute. A couple of jackdaws and an enormous crow pompously strut across the lawn beneath the feeders ready to lay claim to any dropped jewels from the small birds gorging above their heads. The two juvenile starlings are now both hanging from the suet ball feeder as they renew their squabble and become much more engrossed in this than the bounty at their toes. As I watch they clash together and are so involved they fall locked together out of the tree without seperating and land on the head of the enormous crow at which all three explode into started departure.

Peace reigns once more as I turn the page and reach for the coffee cup only to find the last dregs have gone cold. I head inside to get a refill and by the time I get back a moment later threatening clouds have rushed in and the wind has picked up. A startling rainbow juts from the hill in front of the house and I manage a photo or two in the few moments of its life. 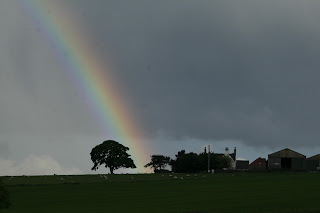 That's hint enough for me as I collect my book and close the front door behind me. This coffee will be drunk inside in the comfort of my armchair in the library.

I think I feel a blog coming on.

You've caught the early morning experience perfectly. Here the season is now too hot for coffee on the front porch unless I'm out very early. I keep binoculars on a small battered table by my chair for bird watching--there's just room also for a book and a mug.

What a compelling commentary! Only you could make a coffee sound poetic, Alistair! Right now I'm jealous of your coffee - for the first time in my life, I'm having acid reflux problems. Off coffee right now while I figure out my triggers..... :( Have one for me!

MM - This week has been atrocious with some parts of the country - not here thankfully - getting a months rain in less than 24 hours. This morning brief sunshine was a welcome chance to get out and enjoy some sone, even if just for a wee whiley.

I too have binoculrs beside my armchair in the library.

Cheers Nicky - and sorry to hear of your troubles with acid reflux, thankfully not something I've ever had but my lovely G I'm sure had it at one point and it was very distressing. Get well soon.

Hey Alistair! Evocative stuff, my friend. I'm rather envious of your early morning bucolic bliss. But at least I can get a coffee. Shall I be mother? Indigo

Hmmmn - Just be you - and get pouring!

I've stuck the pot on.

Well written again Alistair. I could almost smell the coffee, hear the birds and feel the warm breeze.

I'm getting so fed up with blogger. I've already left a comment, but it seems to have disappeared into hyperspace.

Very evocative writing Alistair. I can almost smell/taste the coffee, and feel the warm sunshine on my skin.

Hullo rerr china! - Nothing wrong with blogger this time - just me having been at work. I have to do sleepovers sometimes and have been away for the best part of two days hence the comment seemingly disappearing into the ether.