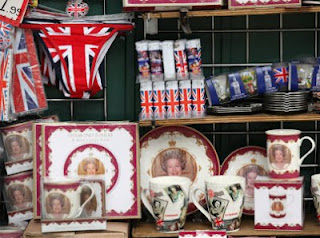 Not being a royalist I had to avoid TV for most of the last week as it was completely dominated by programming around royals, royalty and diamond jubilee’s as the BBC and politicians tried to whip everyone into a patriotic frenzy and remind everyone of the ‘stiff upper lip’ kind of ethos that makes this country great. {aye right} It seemed like every minor member of the royal family was on telly, being interviewed about how great it is to have a royal family doing all that very important work for us plebs and what great value for money they all are and what a wonderful woman HMTQ is or presenting programmes about how great it is to have a royal family doing lots of very important work and being very good value for money and not forgetting what a wonderful woman HMTQ is.  News, weather, current affairs, history and even bloomin cookery programmes across BBC TV and radio aligned themselves to the jubilee and strained themselves to make connections at every level no matter how obscure or ridiculous as ‘the whole nation went into countdown for The Queens jubilee’.


Surprisingly lots of people who should frankly IMHO know better got sucked in {or had to toe the line} to the extent that I couldn’t bear to switch on the TV to even try and watch any British orientated programming unless they were repeats – which is I suppose quite easy these days where stuff is constantly re-run ad nauseam regardless of quality. {Jings I’m jaded!} Unable to listen to my normal radio station in the car as it got to such a state of jubilee hysteria that anyone being interviewed or phoning in to request a song was asked what they were doing to celebrate the occasion I drove in silence for days in case I burst a blood vessel.


Country in crisis? Jobless at highest for decades? Hopelessly incompetent multi-millionaire politicians running the country bent on maintaining a corrupt capitalist economy and hierarchical class system where those who have get more and those who haven’t can pay up and shut up?


Stick up some bunting and have a party!  God bless Queen Liz! {for conveniently having an anniversary to deflect attention for us.}


No thanks luv. No offence, I'm sure you're a perfectly nice wee woman who works hard and feels that what you're doing is important 'n that. I'm sure you're glad that your {extended} family have a p{a}lace to live and food to eat and that their future and income is secure.

But you're not for me. I can't support what you stand for.

Email ThisBlogThis!Share to TwitterShare to FacebookShare to Pinterest
Labels: rant

Great post :) So glad I got rid of the TV a few years back and never listen to the radio much.

Ta muchly MrsL. - I'm wondering if curmudgeonly old me will get a bcklash on this one from the more royalist folks around........

Alistair, it's good to hear someone echo my sentiments. I too am in the "non-royalist" British minority. I don't wish any of them any harm, but sadly they're mere figureheads who are basically just celebrities - and I can't stand Hollywood either (but at least the celebs do some work to "earn" some of their money). Our Royals just bleed the island dry - no taxes for them, or for the extended families associated with them. I have nothing good to say about that. Yet those taxes don't disappear. Of course not! They just get divvied up by the hard-working Brits still doing their best to earn a living on the island. I'm always amazed over here in the US - the Americans just adore the Royals. Hell's bells, you should hear the gushing. Yet mention the President's name, and it initiates a rant as long as your arm about over-taxing, etc etc......they should try having politicians AND an enormous Royal family to pay for! OK, I'm off my soapbox now, LOL!

A soapbox for two Nicky - how nice of you to join me! lol.

Tell us how you REALLY feel, Al ;)
I'm not sure any self-respecting Scot should feel too much love for the monarchy - am I wrong in that?
I, as a Canadian am fine with being in a constitutional monarchy, although I'm not emnamored with Charles being the next in line. I suppose since we Canadians could have ended up being ruled by France or even the U.S. I'd rather have HMTQ as our head of state...but that's just me. Cheers! Glad the 'madness' is all over for you (although I did catch their (Madness')cool act and light show on the top of Buckingham Palace).

I'm afraid I couldn't put some of what I feel on my wholesome wee blog here Rebecca - not spelled correctly anyway! lol.

Maybe if I was a few thousand miles away I'd feel better about them too..........Hmmmm there's a thought.

I'm so, so glad I live 13,000 miles away from the "celebrations". There were a couple of mentions in our press and TV but that was it.
Until last night.
Then they showed the whole horrible f*cking show from outside the Palace. My Beloved insisted on watching it, but after about 30 seconds of Cliff bloody Richards jumping around like a plastic mannequin on speed, I retired to the sanity of the family room and read a book instead. God, it was awful. Also saw a glimpse of the Maori Waka being paddled down the Thames beside the Royal Barge.
Two thoughts on this.
1. The poor old Maoris dressed in traditional feathers and beads getting hypothermia.
2. Every time the Royal barge hove into view I started chanting "Sink you Bastards, sink"

Lastly, it's no wonder the Germans want them, that's where they all came from originally, except of course for Phil the Greek.

Well said Al. And I think this is the first thing that TSB and I have totally agreed on...!

As a Canadian I have a detached interest in the royals but every time there's a celebration or some travel or whatever, I can't help but wonder at the cost and how that money could be used differently.

Thanks all - interestingly not one dissenting voice - which has been a surprise.