In an Edinburgh cafe. 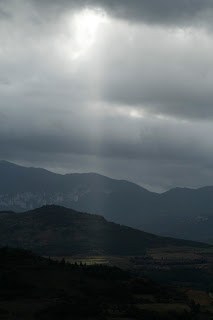 I looked up as she was coming in through the door. She moved in that careful way old women do with slow gentle steps deliberately taken. She walked along the unmanned counter of café Camino with quiet dignity, past the display case with its ready-made sandwiches and rolls, salads and little dishes of olives and feta in oil, stopping just beside the till where she put down two bags of shopping with that same kind of deliberation, not giving the impression the bags were heavy or that they were light. She rang a silver bell {that I hadn’t noticed while I waited for a staff member to come from the kitchen to get me my coffee} and waited patiently but no one came so after a few moments she rang the bell again – twice.


Voices could be heard from the kitchen, conversations in Spanish and English between two or maybe three people. Still no one came. The bell was rung again – four sharp taps demanding attention and at this a stunning beauty came from the kitchen and beamed a glorious smile at the old woman. "Good morning - the usual?" she asked. The lady smiled and nodded and as the girl turned away to begin preparing her order she picked up her bags as carefully as she had put them down and moved over towards me with that same measured, careful step, choosing a seat at an empty table for two nearby. The bags were again put down and she removed her jacket, a pale off –white affair and hung it across the back of the wooden chair before pulling it out and taking her seat.


I don’t know what it was about her but somehow - like a ray of light on a dark day - this outwardly unremarkable old woman captivated me as she reached down into a handbag and removed a book, its bookmark showing perhaps a third of the way in. She handled her book like a treasure as she laid it on the table, delicately opening the pages and setting aside the bookmark as she began to read. Words popped into my head; fastidious; prim; studious; schoolteacherly {is that even a word?}; serene. Everything about her was a performance, beautifully understated but definitely theatrical. From her pale apparently undyed dark hair cut in a boyish hairstyle and the aged but well cared for skin beneath, to the immaculate but clearly not new black trainers on her feet everything seemed somehow worthy of notice. Her features initially seemed unremarkable yet as I looked closer it seemed like this was an oversight. Closer scrutiny showed she had a face that echoed a youthful beauty, an intelligence and strength of personality impervious to time. Her lilac sweat top with collar and cuffs was a size too large, almost but not quite swamping her and therefore just failing to make her look unkempt. The incongruous Disney Eeyore badge boldly embroidered on her left breast took my attention as I noticed the blue body, black hair of the mane and tail and its cream face turned to look over its shoulder apparently directly at me. I wondered idly if the oversized top had been a gift from a grandchild perhaps.


The dusky senorita from the kitchen reappeared and as her coffee and filled roll arrived the old lady laid out a knife, fork and a napkin, positioning each with practiced precision. The waitress leaned in  to say a few words and smiled, getting a smile in return and laid a hand gently on the old woman’s shoulder as she turned to leave, a tender, intimate gesture that made me wonder about the connection there clearly was. I realised that despite the departing beauty I was still only looking at this old woman as she opened two sachets of sugar one at a time with thin fingers, pouring both into her cup and stirring carefully before tapping the edge of the spoon three times on the rim and placing it back on the saucer. Every action had poise; every movement had its own pace. Everything was exact. It was utterly fascinating, utterly mesmerising and my coffee lay ignored, my own book lying forgotten in front of me.


Who was this woman? What was her story? Did she live alone or did she have people who mattered; who loved her and were loved in return? Where had she come from with her bags of shopping? What had she been like as a young girl, or a woman in her prime?  Who had felt pride to have danced with her, to have walked at her side, held her hand or shared a kiss? Was it many or a select few? How many down the years had found her fascinating like I did now? Did she break hearts or had her own broken?


She lifted the cup and held it beneath her nose, enjoying the smell of her coffee with closed eyes and the creep of a smile on her lips. She sipped and smiled again as she laid the cup down and returned to her book, apparently oblivious to the world. I watched and wondered another ten minutes or so, draining my own by now cold coffee before she returned the book to her bag in an equally careful way to get up to put on her jacket. She returned the chair to its place tucked in against her table using two hands and a push from her hip on its back and doing so looked across at me and smiled, an unexpected moment that made me smile in reply. I saw something beyond merely form or physicality: timeless beauty in the soul of a smile.  A wonderful realisation that made my heart skip a beat and left me smiling long after she'd gone.

She leant down, picked up her bags and made her way through the tables once more heading for the exit. From behind the counter a voice called across the room, “Goodbye Grace, see you again tomorrow!”  An old but still clear voice came back, “Yes Isabel, see you tomorrow sweetheart - if I'm spared!”


The glass door closed behind her.

No one can do slice of life description like you can.

That's an excellent description of a timeless instant.

Mind you, it would have made my day if she'd said"
Are you staring at me motherf*cker?"

One of your best, Alistair; a depth of observation, thoughtful description--a graceful piece, befitting your subject.

So lovely, Alistair! Every sentence just continued to draw me in. You're a wonderful writer....

TSB - though I'd miss out the bit where she flipped me the bird as she stood up to leave! HA.

MM - Thanks - I found her very watchable - as you can tell.

Nicky - Thanks too. I enjoyed remembering her as I wrote it. I took out quite a bit of extra stuff after reading it through to try and make it flow a bit better.

You are one of life's natural born observers, if you were more captivated by the elderly woman than by the young beauty :) I sure enjoyed this post, Al. Skillfully done..and now I would like to know what happens next in the lady's day...perhaps she is a Miss Marple type...hmmm...the possiblities are endless and intriguing.

Thank you very much Rebecca. You never know what the rest of a life is - that's part of the fascination isn't it?

It is indeed! (Just thought I'd check back here today :)