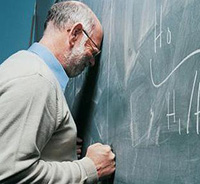 Respectfully dedicated to the aptly named blogger TSB who is definitely twisted and obviously Scottish. I couldn't possibly comment on the last part. A somewhat grizzled and most definitely curmudgeonly teacher in New Zealand, it's the political correctness, petty bureaucracy and spectacular mismanagement that gets him down rather than the students. Never the less I hope he appreciates this tongue in cheek offering

Then sword in hand he hacked his way
between the chattering rows
"First come, first severed" he declared
"fingers, feet or toes"

"Please may I leave the room sir?"
a trembling vandal enquired
"Of course you may" said teacher
put the gun to his temple and fired

Hey Alistair! In the spirit intended, I salute this poem; I know too many teachers. Indigo

Thank you for that dedication Alistair.

Where the hell did you get that photograph of me?

I love McGough's poem. I've actually got it printed and on the wall of my classroom.

I've got a box of grenades in my stationary cupboard, just in case Ringo drops in.

I usually really enjoy your Sunday Posts Al, but this one's a definite 'dislike' from me. I do like McGough, just not this poem. Can't please us all though - and I'm delighted to see that TSB is happy!

TSB - There's a webcam at the side of your blackboard!

This poem proves that the pen may indeed be mightier than the sword. "First come, first severed" Ha!