Made in Scotland - from Irishmen 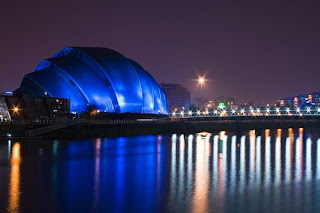 1am and just in from a sojourn back across country to Glasgow Clydeside Auditorium for a concert of Snow Patrol, who formed as another band called 'Reindeer Section'while students here some 15 years ago. They spent the first 10 years of their careers gigging predominantly in Scotland so have a huge fan base here.

Thanks to the lads for a wonderful nights entertainment. A retrospective of the whole 15 years and also including some pre snow patrol tracks. Great music, stage show and craic, especially in a venue for just 3000 people.

Two and a half hours of sheer bliss.

My lovely G who bought me the tickets despite not being a fan of the group has been converted, as can often be the case when faced with a live performance. They worked hard with no support but clearly absolutely love being on stage and performing. They were eager, responsive and refreshingly, for such a big band, completely without ego. Everything they said to the crowd came across as absolutely genuine and its clear that they recognise the years of support from their Scottish fan base as being crucial to them staying the course until eventually reaching a wider audience. They love it up here and consider it home ground, and the sentiment was returned with equal sincerity. I've seldom seen an audience respond with such complete respect for success hard won.

If you get the chance to see them, take it. You won't regret a minute of it.


And they also covered this track from 'Elbow' another of their heroes, and another great band from Manchester. Winner of the Mercury prize in 2007 { when the Unthanks were nominated too}

Public radio on here, so I won't listen to your clips---perhaps too modern for me to "get it." I see you are being a night owl--the rare times that we go "out" it seems that I need to process the evening before I can fall asleep.

Both the tracks are chosen as they are very accessible to most. I need to be able to appreciate the tune or lyrics for most of the music I prefer so I can 'get it' too. These are both quite anthemic tracks. Give them a try - you never know - and one day J may come in to you boogying across the room to Snow Patrols latest release.

Snow Patrol I like too .,., Elbow I only recently discovered and them too I really enjoyed ,, but hey Al .,.,., Unthank ,, c'mon, I was fast asleep before they finished the first verse !! ( however the young lass on the cello was rather fetching I thought :) ,,, )