All at Sea on A Tide of Spending Cuts 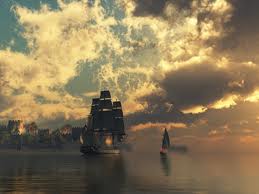 Well, what an interesting day it's been today. Mr Cameron, our duly elected 'High Heid Yin' has announced the result of the defence review. This is a defence review which is "in no way related to" the spending review being announced tomorrow but rather "takes into consideration" the financial climate that we currently find ourselves in as well as the strategic direction we need to take for the defence challenges ahead.

So apparently what we need to defend ourselves over the next few years;
17,000 less forces personnel. {Including 18% less deployable manpower}
25,000 less Ministry Of Defence support staff.
Ark Royal aircraft carrier withdrawn immediately.
Existing Harrier fighter scrapped.
Replacement Nimrod reconnaissance aircraft scrapped.
Tanks and artillery reduced by 40%.
Two new aircraft carriers - with no fixed wing planes available to fly off them until 2010
RAF Kinloss in Scotland - with no Nimrod - to close.
Any final decision on the future extent of Trident nuclear programme delayed until 2016.

Get rid of an aircraft carrier and the aircraft  which use it before a replacement is available? Get two new carriers, mothball one of them immediately then wait ten years to get any aircraft to fly off the one that's in service?  Hmmmm........ So, if we don't need planes on aircraft carrier for ten years, why would we need them after ten years??????   How does this make sense?

Apparently 'some' tornado fighter squadrons may go and some bases will close but which ones "have not been decided yet".

You mean you have already decided to close Lossiemouth, also in NE Scotland but want the RAF to announce it separately so you don't take the heat for impacting Moray with job losses which are equivalent per head of population to 80,000 jobs in London. Now you wouldn't stand for that politically would you Mr Cameron. Oh No. Not all those nice Conservative voters, but well, no one in Scotland voted for you anyway so what the hell difference will it make to you if it's up there.

OK I admit, I may have you wrong. It's not announced so I'll wait and see. {Notice how I'm not holding my breath though}

I do know that the banks are back in profit, bankers have already returned to the big bonus culture AND have wangled an agreement with you to offset previous losses against tax so they don't pay £19 billion over the next four years. That's clever of them - and generous of you if you don't  mind me saying, but I'm sure you took the current financial climate into consideration on that one too, didn't you?


Can't wait to hear the spending review tomorrow. Apparently half a million public service workers will get the chop with probably the same again in the private sector losing theirs with the knock on effect. Of course more private sector jobs will be created later, but these will be at lower salaries and with worse pension provision. And of course how much you can put into a pension before paying tax has been reduced so we can pay more tax on money we have already paid tax on.

Even more competition to come for me in the job market then - and I'm already looking at jobs with half my previous salary.
at October 20, 2010

At least the UK still has or will have after the bloody cuts, a fighting force to be reckoned with..
Down here in NZ I think the navy is 2 frigates, a converted RollOnRollOff ferry and 4 patrol boats. The Air Force has 6 helicopters, 6 C-130s and 6 Orions, and the Army is mostly peacekeepers.
As an ex-gunner, it's really sad to see the cuts in the Artillery. It took hundreds of years to build up the organisation and esprit de corps which make the British Forces so special, and the goverment cuts it all without regard to this proud tradition.

Sorry to hear about the continuing job search.. I've been unemployed three times in my life, and it's a horrible feeling.

Best of luck in the search.

more jobs to go...but bankers get there bonus`s again...typical!
i just wonder where all these people will get work about?...

I was a right grumpy sod when I posted that yesterday and not much has changed today as I try to digest the new from the Chancellors' sad performance.......

Thanks for the comments guys.

I just heard the news yesterday about the cuts from a friend who follows the UK news via the internet. It is a sad business all round.