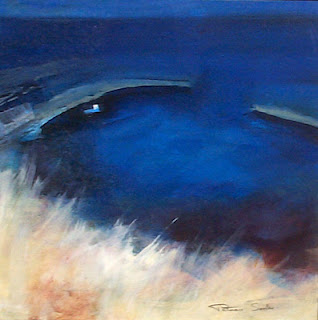 On the wall at the side of the bed is a painting by Patricia Sadler, a local lady with a talent for colour which shows in her wonderful paintings of  flowers. The painting across from me and which I see as I wake almost every morning isn't one of her flower paintings though. It's a small painting about twelve inches by twelve, framed in a broad, gold painted frame, of the beautiful little harbour at Cove, a mile, maybe a little more, from the house. It's an impression of the harbour from above, corn gold grasses and stone coloured walls frame waters painted deep in the colours of summer. It often puts a smile on my face as I wake up and it's often the last thing I look at before putting off the bedside light. It's familiar and comforting both as an object and as an aide memoir of a lovely spot which is just what you want as you put your head down on the pillow. I think so anyway!

The Lovely G and I found it tucked away in a corner of a tiny little art gallery on the west coast of England a few years ago. As I often do, I'd wandered away on my own after a bit to explore the gallery which was an old house with lots of nooks and crannies. I turned into what I thought was a corridor to find it was in fact an ancient and blocked off doorway to another part of the house. The painting of Cove was on the wall there where the door should have been, instantly recognisable and completely unexpected. I knew as soon as I saw it that it would be coming home with us. It was so out of context where it was, as if it had been put there because the gallery owner had nowhere suitable to put it or thought no-one would want to buy it. It was the only painting of Patricia's in the gallery and the only one in that style I remember. It was strange to bring it back to where it had started life as an idea in the head of someone we know and who's work hangs here and there around the house. 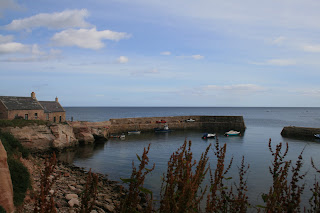 Cove Harbour Today.
The Lovely G and I enjoy Cove with its confusing combination of proximity yet solitude. It feels a timeless spot. There are only a couple of small boats working out of the harbour nowadays, mostly creel fishermen with lobster-pots and the like working the coastline up toward Dunbar and down to Eyemouth. Just small scale like it always was. The harbour, now privately owned and managed, offers good protection tucked away at the bottom of the steep slopes and surrounding cliffs  In bygone days Cove gave its shelter to the boats belonging to the families of the hamlet that shares its name at the top of the cliff . It made an ideal base for smuggling and plenty of illicit contraband has been hauled up the path to the top of the cliff and away or been hidden temporarily in the side passages of the tunnel cut through the headland.
The hamlet of Cove was never a big place and, sitting proud near the edge of the cliff, is often cruelly exposed to the elements. There is a poignant little memorial to the loss of the men of Cove in the great storm of 14th October 1881 when many fishing communities on this part of the coast were devastated. The memorial sculpture shows the widows and children left behind looking out to the sea for the return of their men. Cove was the worst hit community proportionately, losing four of its five boats and 11 of its 21 fishermen. 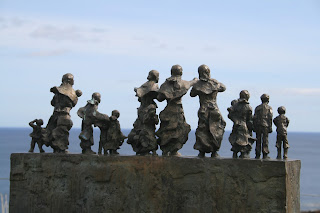 Cove Memorial
It makes it easy to understand why even now the lifeboat and RNLI  is such a big thing locally even when the numbers of fishing boats has declined and pleasure boats have taken over the harbour at Dunbar. Especially as we head towards the colder parts of the year.
See you later.
Listening to Supertramp, 'Take The Long Way Home.
at October 15, 2010

You, G and Coastkid all share the same Cove affinity I think. I haven't neem there for many, many tears - must take a spin down there and introduce the lovely O to its charms. I recall a tunnel through rock, is that right? Lovely coincidence with the beautiful painting - what were the chance of that? (slim)

Of course there's a tunnel - you even mention it! (Doh! On my part!)

i love to visit cove, makes it more special if you down and have the place to yourself(ve`s)
i did a wee film there...revist planned soon i thinks!, thanks Al

This was a nice read to wind down a busy day.
I've never lived near the sea, although we've spent quiet vacations in the Canadian maritimes.
The story of the widows and children eternally watching for the return of the lost boats is reminiscent of historic tragedies which are commemorated in various ways in Nova Scotia and PEI.
Isn't it interesting how a loved painting or photo can become a familiar talisman?

Good Morning MM, Yes it is odd how that happens but I'm grateful for it. I wouldn't say I'm materialistic in the least but there are a few bits which mean the world to me and I couldn't part with them. This is probably one of them.....

Hello Al: I am catching up on your blog today. That would indeed be a lovely painting to have by the bedside - gorgeous colours, I agree! It is wonderful to have these special places so close to the bustle of home that immediately bring space and beauty to a weary brain.
That sculpture of the women and children is very moving. There are certainly a lot of songs on the subject of waiting for a man to return from the perilous sea.

Nice post. I've been away from Scotland for almost 7 years now, but we have paintings of places in Glasgow, Fife, Perth and Tayside all around our house here in NZ. Mostly we take them for granted, but sometimes...Then I get a bit homesick, start fantasising over bridies and morning rolls with beef ham.
I've passed the turn-off for Cove many times on the A1 (I used to be a sales rep in a previous incarnation), but I cannot actually remember being there. Our favourites always used to be Crail and Anstruther. My beloved still sighs when she remembers the fresh-caught crabs from Crail.
Oh well, she'll just have to put up with the fresh crayfish, paua and mussels from NZ.

Rebecca - glad you enjoyed it.

TSB - thanks for dropping by and for your comment. My old Uncle in Melton Mowbray misses many of the same things, but at least we can get them to him sometimes. I guess living in NZ as its own compensations though.