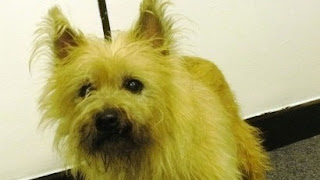 A little lost dog boarded a bus by himself and refused to leave as temperatures plunged to minus 11C.

The frozen Cairn terrier, named Claus by fellow passengers, was found cowering on the bus in the west end of Glasgow with icicles hanging from his fur.

Passengers were astounded when the dog, aged about eight years old, boarded the First bus when it stopped on Dumbarton Road on Wednesday. He was so cold he found a warm spot in the corner and curled up. The bus driver took the freezing dog along to the local police station and he was then taken to the Scottish SPCA's Glasgow Animal Rescue and Rehoming Centre.

Now the charity is desperate to find his owner.

"Claus is a cheeky wee lad who we think is around eight years old. He isn't microchipped so we don't know who his owner is. The passengers on the bus must have had a real surprise when he jumped on and refused to get off. He was so cold he had icicles attached to his coat so maybe he made a dash for somewhere warmer."

She added: "Even when he arrived here he went straight to a warm spot, curled up and didn't want to move. He's still to have a full vet check though he does seem to be walking gingerly, so he may have arthritis. Hopefully his owner will be missing him and will come forward."

Anyone with information is asked to call the Scottish SPCA Animal Helpline on 03000 999 999.

At least the wee fella will be warm for Christmas.

oh that poor little thing, the cat that visits us has done much the same, she seems to have moved in. So we have a house guest for Christmas

Speaking of dog tales...here's one for you...don't read the preview because it gives too much of the story away...just rent it and be sure to have a box of Kleenex at the ready.

(not sure who you rent from in Europe but...)

Glad you enjoyed it.

Kevin - thanks for the link. I'll check it out over the holiday hopefully.