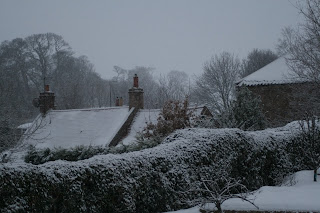 Today, after yet another snowfall of {for this part of the world} almost biblical proportions, I took the camera out to try and get a photo of Traprain Law in the snow. Traprain is one of the key landmarks of East Lothian and when I see it on the road back from Edinburgh or further afield I always feel like I'm almost home. At least I'll be home in twenty minutes I should say. Before I left I took some photos of the birds feeding and stuff by the house {again}. 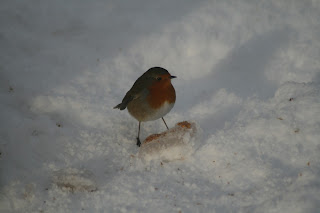 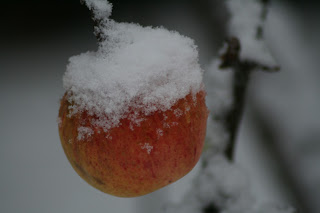 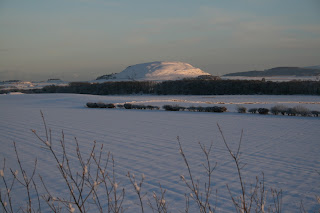 Traprain Law in the distance 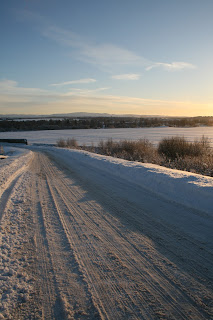 A local road after a weeks snow.
And a week of the local authority getting to grips with it. 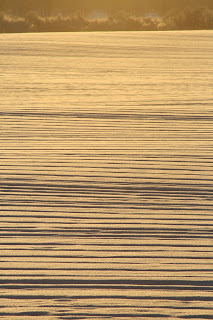 Plough ridges in the snow look like wave patterns. 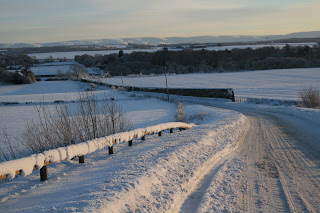 I had to go down the hill to the farm to turn the car.
The outside temp plummeted from a balmy -5C to -12C in the shade.
The car just made it back up the hill.
Scary stuff for a moment or two. 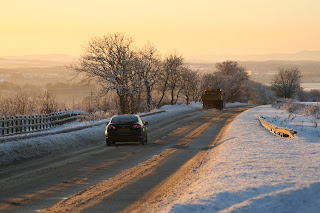 A snow-plough does its stuff on the main road. 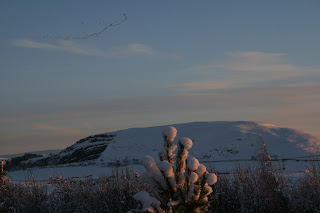 A skein of geese over Traprain. 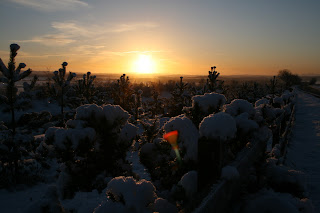 Great Pics Al!,
Its lovely to be out in this snowscape,
and then lovely to get back home into the heat and a warm drink!

Lovely photographs, Alistair. That is one darling bird, too. Writing from a freezing & windy Washington, DC. We await our first snow yet but after last winter, no one is in the mood to have a repeat. Stay warm (& a meow to Jess, too, from Julie the Cat).

Do cars over there run "snow tires" in winter?
How about front-wheel drive and 4x4 vehicles--not the norm, I take it?

Aw - you'll have me in floods of homesick tears if you keep this up, man! Some beautiful views. Love the geese, love Traprain. Must tell you about me and Traprain Law one day!

Office closed for the third day on the trot (although I managed to walk in!).

Did you manage to meet up with CK or did the weather put the scuppers on that? Cheers, SNB

I was trying to leave a comment when things failed so if you get this twice you'll know why. Beautiful photos! You really are having a winter aren't you, but you seem to be making the most of it. The little bird in the snow looks just like a Christmas card, and I'm so glad he has some apple to eat when all the seeds are hidden under the drifts.
Cheers, and please enjoy the snow for me. We have none, just rain.

Hullo all, sorry for the delay in getting back to you. Been a full day with children's hearings and prep etc.

CK - you're right. The 'apres ski' is one of the great pleasures of this kind of weather. Sorry we had to cancel last week because of the weather. Perhaps next week is a possibility - unless you are around on Friday and things are a bit better.

Giulia, Thanks but it's hard to take bad photo's in weather like this. There are incredible pictures wherever you look. Jess sends purrs from her place in front of the fire......

MM, snow tyres are almost unheard of over here, but you can get them. 4X4's are common but are a nuisance and a hazard on our narrow roads over here which are unsuitable for these hulking big beasts which are becoming more prevalent these days. Usually they contain only one person {who is usually blonde} and clog up streets near schools etc. {Grrrrr!}

SNB, Homesick? Then get your butt back here. It's not that bloomin far. {Then we can have a pint with your wee bro too.} My Lovely G has also missed several days work as the trains and buses have been off and her wee car is stuck in a snowdrift at the side of the house which I haven't been tempted to dig out as she would then need me to dig out the rest of the drive - and that's the best part of a hundred yards. Luckily I left my car down on the main road at the first hit of snow. {more good luck than good planning though}

Hi Rebecca, Glad I didn't scare you off! Yes it's amazing and very unusual in this part of the world. It brings out so much in the landscape that's missed normally. The robin pic has come out as almost an archetypal pose hasn't it. Nice of him to be so obliging....

At the moment we're going through about 10k of bird seed a week and about 30 seed balls. Fattest birds in the country I bet. There were about 80 birds of various species between front and back garden at one time on one morning this week.

Fantastic photos, our snow is nearly all gone, but then we didn’t get a lot.

Cheers lom - ,Major thaw here overnight too. I've never seen so much snow disappear in such a short time. Although the drive is treacherous with ice the garden has lost about 80% of its snow overnight!!!

I just hope it all thaws before we come over at Christmas. I don't really fancy driving to The Black Isle (Where my Dad lives) in thick snow. I love driving up the A9, but not in a blizzard. Getting stranded in Aviemore is not fun.

Pleased to report a thaw just as dramatic as the blizzards has arrived today. I've never seen snow disappear so fast. Looks like by the time arctic cold hits us in a couple of days we should only have frost to deal with. If the drains can get rid of the melt water that is. I'm sure it will be fine by the time you get here.

Sorry for the delayed response Al. But love the photos, especially the ploughed field.

I'm sure I posted on here? I was so excited at seeing Trapain Law (studied it in Archaeology, because of it's "Pictish" hoard - well, the Roman bling anyway.

Fabulous photos - especially the last one.

Glad you enjoyed them.

ps - this was the only comment I got from you on this one BB....