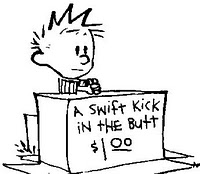 Calvin
"What d'ya mean I wont sell any?
Everyone I know needs one!"

This week sees the start of the prosecution of three sorry two - one's already owned up to a guilty plea - ex-Honourable Members Of Parliament for expenses fraud. {I commented on this earlier in the year here and here if you want more info} They tried to use the defence of 'Parliamentary Privilege' to prevent prosecution. {The statute of Parliamentary Privilege dates back to around 1650 and was designed to allow freedom of speech within parliament and to protect members from coercion, particularly by the king - until they subtly resolved that little problem by decapitating him. In this modern instance the MP's in question stated that any issue relating to work within parliament could only be investigated and dealt with by parliament itself in the hope of avoiding criminal charges. They were wrong} Hopefully they will get both justice and fairness and meet the same end as King Charles - not the 'King' King Charles, I mean the dog King Charles - and have their nuts either removed completely or at least certainly given a severe judicial squeezing.

Last week also saw oor ain Scottish MP's decide overwhelmingly not to pass Margo MacDonald's end of life assistance bill for further consideration, {more reflections on that issue here} which leaves anyone assisting anyone terminally ill to deliberately end their life able to be charged with homicide under Scots law. As I said in my last post regarding this, no matter how you feel about suicide it's not against the law in Scotland, so how can it be an offence to help someone not to commit an offence themselves.

Email ThisBlogThis!Share to TwitterShare to FacebookShare to Pinterest
Labels: politics