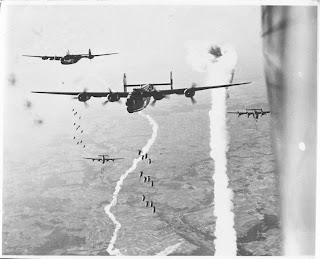 My father served in this squadron. These posts follow 153 Sqn operations from Jan '45 to the end of hostilities in real time.

The selected target for March 8th was Kassel, which lay mid-way between the advancing armies of Russia and the Allies, but well ahead of both. Although the weather over the UK was bad for take-off and landing, that over the target was excellent, and crews had no trouble in identifying the target indicators and in pressing home a decisive attack. 176 aircraft took part in this final heavy raid by the RAF on Kassel. Fierce fires were still visible from well over 60 miles distance on the homeward leg - and to S/Ldr Rippingale on his approach!

This late arrival at the target was occasioned by a most unusual incident. While well along the runway, PB783 (P4-2ndI) with its tail up and nearing lift-off, suddenly swerved off the tarmac and ground-looped on the grass. It transpired that F/O Bruce Potter (flying his 28th operation) had collapsed at the controls; only a quick response by the F/E, Sgt Wooley, in closing off all power averted more serious consequences. Wing/Co Powley invited the crew to fly the operation with a "spare" pilot, but concerned for their Skipper and somewhat shaken by their experience, they firmly declined. The W/Co therefore ordered the night's Reserve Crew to take off instead - which explains how S/Ldr Rippingale departed at least 15 minutes behind everyone else, to blaze a dangerously conspicuous and solitary path to a well-lit target. This late arrival on the scene could have had dire consequences, but he passed unscathed through skies that had seen intense flak and fighter activity at the height of the raid. Among the casualties was NG 218 (P4-2ndB) which, in the care of F/O Searle, just made it back to Manston emergency airfield suffering a holed petrol tank, which grounded it for a week.

F/O Potter was admitted to hospital and never rejoined the Squadron.

Kassel was the Headquarters for Germany’s Wehrkreis {military district} IX, and a local subcamp of Dachau concentration camp provided forced labor for Henschel facilities. As well as being the capital of the provinces of Hesse-Nassau & Kurhessen, Kassel had some important targets.

The most severe bombing of Kassel in World War II destroyed 90% of the downtown area, some 10,000 people were killed, and 150,000 were made homeless. Allegedly most of the casualties were civilians or wounded soldiers recuperating in local hospitals, whereas factories survived the attack generally undamaged. The US Army captured Kassel on 3 April 1945. 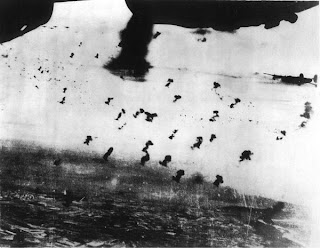 Flak over the target was an ever present problem for crews who had to endure an extended period of straight and level flight on the run up to bomb release. This stretch, which would be for the final 10-12 miles of flight to target, allowed the bomb aimer to correctly position the aircraft over the target and would last for what felt like the longest 3 or 4 minutes of the crews lives. Once bombs gone was signaled the aircraft had to fly straight and level for a few further nerve shreddingly excruciating moments so that a confirmation photo could be taken. Only once this had been completed could the pilot break and start the run for home.

Box flak was simply the gunners getting as much munitions up into the sky as possible to try and hit or deter the aircraft using experience to gauge the correct height and position.

Predicted flak could be much more effective as it relied on radar linked guns using the supplied information from ground based radar and also from reports from night-fighters who would fly alongside the bomber stream and report back direction and height information to the gunners below. This meant that very accurate fire could be directed and this could also be linked to radar controlled searchlights making for an effective umbrella of protection for the target. 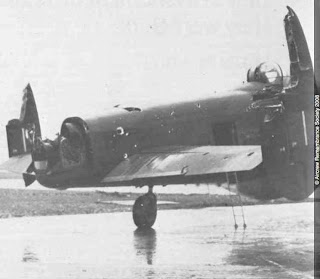 Once on the way home, the bomber stream would continue to be targeted by night-fighters lurking around the edges to use probing attacks on the unwary and to pick off any aircraft who were damaged and lagging behind. This contributed to heavy losses until allied air superiority was firmly established and fighter support could be provided - mainly for the daylight raids. The Bomber Command chief - 'Bomber Harris' - actually complained at the lack of fighter escorts and the heavy losses being sustained in attacks on German cities. This was odd as he switched the RAF to night raids as this was seen by his command as a safer option {USAAF continued to use predominantly daytime raiding tactics throughout the war} and he was therefore complaining that in effect his own tactics were incorrect!

Even the Bomber crews called him 'Butcher Harris'
at March 08, 2010