A Lancaster departing for  an operation is waved off by WAAF and ground crews.

These posts follow 153 Sqn operations from Jan '45 to the end of hostilities in real time. My father served in this squadron.

On March 24th British Airborne and ground forces successfully crossed the Rhine at Wesel. Meanwhile, the Americans were gradually encircling and isolating the Ruhr, where the defenders remained obstinate and defiant. To soften their resistance and to further deny their resources, a force was sent to attack the Benzoil plant at Harpenerweg - a suburb of Dortmund - also the Mathias Stinnes plant at Bottrop. The Squadron despatched 10 aircraft, who flew without escort but saw no enemy fighters despite clear weather all the way (both sides were doubtless fully engaged supporting or attacking the Rhine crossing). The marker flares were a bit short, so the Master Bomber instructed crews to overshoot them. A very accurate and concentrated attack then ensued although S/Ldr Rippingale had to return prematurely due once again to failure with 'smokey joe', the port inner engine on LM 754(P4-E).

This raid saw a remarkable exploit by F/Lt Whizz Wheeler and crew flying in ME 541(P4-3rdA). After bombing they set a course to take them over the town of Hagen and Whizz remarked to his Navigator "some of the others are going off to port. Are we OK?" Feeling his competence was in question, Freddie Fish huffily replied "they're off track, we are dead on track". Absolutely and unfortunately right - for at that same moment, sitting out on their own, they were hit hard by predicted flak. Both inner engines were set afire and the starboard petrol tank was holed, causing petrol to stream back over the wing (had the flame reached the petrol a catastrophic explosion would have occurred and all would have been lost). Immediately both engines were switched off, fire extinguishers operated, and despite the loss of the starboard inner engine constant speed unit, both propellers were feathered.(i.e. blades turned edge-on, to minimise drag) To dowse the fires, Whizz put the aircraft into a steep 8,000-foot dive, levelling off at 12,000 feet. This proved successful, so they collectively took stock. 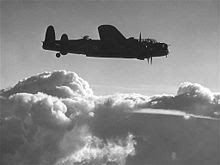 They had lost, and were still losing, a lot of petrol; they had no hydraulic power; (needed to lower the flaps and wheels) the throttle controls and many of the instruments were damaged. No way could they get all the way back to base under their own steam. They still had two engines working, and although they had insufficient power to maintain height, they had a little in hand. They therefore needed to land somewhere in Europe. All navigators constantly received sheets of information concerning emergency landing facilities, navigational beacons, etc. to such a degree that they could not bother to read them. Fortunately, Freddie would - and even carried them on operations. He quickly gave Whizz a course for Eindhoven, about 60 miles Northwest in liberated Holland, which provided a 24-hour 'Darky' (emergency) system and three usable runways. However, 'Darky' response advised Whizz that due to enemy attack only 500 yards of runway was available. His situation was clearly critical.

He had an emergency compressed air system sufficient to lower flaps and fuel and power to reach the airfield, but insufficient to enable him to climb for a second try if he did not land at the first attempt. Visibility was very poor so Whizz asked for a guiding red Verey flare. This appeared on his starboard side just as he was lining up to land on the parallel autobahn! He managed a flat skid turn to enable him to approach the runway, just above stalling speed, narrowly avoiding the control wagon (Whizz distinctly recalled the startled look on the duty erk's face as the wheels just cleared the caravan). They were down, and thankfully able to pull up short of the craters ahead.

During the approach, apart from his F/E, the crew had taken up crash stations. To see what was going on the W/Op somewhat stupidly jettisoned his escape hatch and stuck his head out. The slipstream caught under his helmet and, but for
prompt anchoring action by Freddie, he would have been sucked out. His predicament caused great laughter among the rest, but it was overheard on the intercom by Whizz who, trying desperately hard to cope in a frightening situation, did not appreciate the joke at the time.

After a night at Eindhoven, they were ferried in a Dakota back to Down Ampney, Glos, and subsequently provided with transport back to Scampton. ME 541(P4-3rdA) was in such a sorry state that it was classified damaged beyond repair.

There were no recorded squadron losses on this raid.
at March 25, 2010