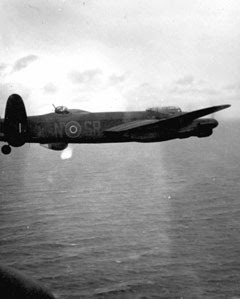 Low level At Sea
Continuing the story of my late Dad's Lancaster Squadron From Jan 45 to the end of hostilities in May.


For the crews of 153 Squadron, targets were now proving elusive as the allied armies pushed ever onwards into German territory. On many days the squadron was stood down, occupying the time by continuing with low level flying practice and map reading, honing the various skills and reflexes needed to perform this safely for long periods at a time. So it was a relief of sorts to be returned to 'normality' when ordered to attack the island of Heligoland on 18th April. 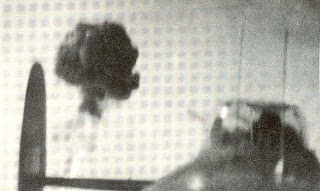 A Near Miss
By 'borrowing' an aircraft from 625 Squadron, 153 Squadron was able to dispatch 19 crews to join almost 1000 aircraft attacking the naval base, airfield and town. This included 5 crews undertaking their first operation, 2 (F/Os Sinnema and Tobin) completing their tours, and W/Co Reddick (from HQ 1 Group) making a 'guest' appearance with the crew of F/O Red Penman. The 'payload' for each aircraft was an unprecedented 14,000lbs weight of high explosive bombs.  The operation itself proved to be little more than a training exercise. Perfect weather meant clear skies all the way and the target was visible from 30 miles out. The attack was intense, accurate and lethal. Slight defensive flak soon stopped as the targets were overcome.  The bomber stream was supported by Spitfires and Mustangs which were superfluous in the event. 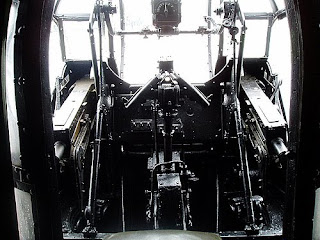 S/Ldr J C Day and his crew joined the squadron on 18th April to replace S/Ldr John Gee as Commander, 'B' flight when he was posted out of the squadron on the loss of his crew.

Thanks for your encouragement from across the Atlantic. A Spring toast to you and men like your Dad in the Lancaster Squadron who handed down much good stuff, even the freedom to go paint spring landscapes!
Best Regards,
Taylor

Many thanks TJ and thanks too for signing up to the blog. I look forward to chatting and visiting with you again soon.

Hello from Coltishall in Norfolk I have a nose shot of Lanc Vicious Virgin with my late father in law Armourer Sgt Tony Doult and other erks in a posed photo shot. I believe this aircraft was on 153 sqdn would you like copy of it? Gil Harding ex WO Eng 54(F) Sqn Jaguars


Love to have a copy along with any names etc if known. With your permission I'd be happy to add it into these posts as a mark of respect and recognition too. It's overlooked how tough, demanding - and critical - the role of ground crew was in operations.